Julie Payette, OC, CQ (born October 20, 1963) is a Canadian engineer and astronaut. Payette has completed two spaceflights, STS-96 and STS-127, logging more than 25 days in space. She served as Chief Astronaut for the CSA, and has served in other roles for both NASA and CSA, such as CAPCOM.

In July 2013, Julie Payette was named Chief Operating Officer for the Montreal Science Centre in the Old Port of Montreal. In April 2014, she was appointed a Director of the National Bank of Canada.[1]

Payette was born in Montreal, Quebec. She attended elementary and secondary (Collège Mont-Saint-Louis) schools in Montreal. She also went to Collège Regina Assumpta for three years. In 1982 she completed an International Baccalaureate diploma at the United World College of the Atlantic in South Wales, UK. For her undergraduate studies, Payette enrolled in McGill University where she completed a B.Eng. in Electrical Engineering in 1986, after which she completed a M.A.Sc. in Computer Engineering at the University of Toronto in 1990.[2]

Between 1986 and 1988, Payette worked as a systems engineer for IBM Canada's Science Engineering division. From 1988 to 1990, as a graduate student at the University of Toronto, she was involved in a high-performance computer architecture project and worked as a teaching assistant. At the beginning of 1991, Payette joined the Communications and science department of the IBM Research Laboratory in Zürich, Switzerland, for a one year visiting scientist appointment. When she returned to Canada, in January 1992, she joined the Speech Research Group of Bell-Northern Research in Montreal where she was responsible for a project in telephone speech understanding using computer voice recognition.

Payette was selected by the CSA as one of four astronauts from a field of 5,330 applicants in June 1992. After undergoing basic training in Canada, she worked as a technical advisor for the Mobile Servicing System, an advanced robotics system and Canada’s contribution to the International Space Station.[3] In 1993, Payette established the Human-Computer Interaction Group at the Canadian Astronaut Program and served as a technical specialist on the NATO International Research Study Group on speech processing.

In preparation for a space assignment, Payette obtained her commercial pilot licence and logged 120 hours as a research operator on board reduced gravity aircraft. In April 1996, Payette was certified as a one-atmosphere deep sea diving suit operator. Payette obtained her captaincy on the CT-114 Tutor military jet at Canadian Forces Base (CFB) Moose Jaw, in Saskatchewan in February 1996. She obtained her military instrument rating in 1997. Payette has logged more than 1,500 hours of flight time,[2] including 600 hours on high performance jet aircraft. 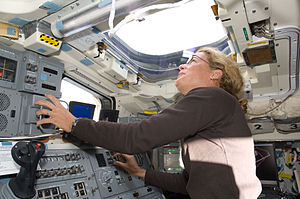 Payette looks through an overhead window while operating the Canadarm controls on the aft flight deck of Endeavour during STS-127 activities.

Payette reported to the Johnson Space Center in August 1996 to begin mission specialist training. After completing one year of training, she was assigned to work on technical issues for the Astronaut Office Robotics Branch. Payette completed the initial astronaut training in spring of 1998.

Payette served as Chief Astronaut for the Canadian Space Agency from 2000 to 2007. She also worked as CAPCOM at the Mission Control Center in Houston for several years, including the return to flight mission STS-114. She was lead CAPCOM during STS-121.[2]

Payette flew on Space Shuttle Discovery from May 27 to June 6, 1999, as part of the crew of STS-96. During the mission, the crew performed the first manual docking of the Shuttle to the International Space Station, and delivered four tons of logistics and supplies to the station. On Discovery, Payette served as a mission specialist. Her main responsibility was to operate the Canadarm robotic arm from the space station.[4] The STS-96 mission was accomplished in 153 orbits of the Earth, traveling over 6 million kilometers in 9 days, 19 hours and 13 minutes. Payette became the first Canadian to participate in an ISS assembly mission and to board the Space Station.[3]

Payette visited the space station again in 2009 as a Mission Specialist aboard Space Shuttle Endeavour during mission STS-127 from July 15–31, 2009, and was the Flight Engineer and lead robotic operator during the mission.[5] At that time, Robert Thirsk was a member of Expedition 20 on the space station. It marked the first time two Canadians were in space.

Payette is fluent in French and English, and speaks some Spanish, German, Italian and Russian. She plays the piano and has sung with the Montreal Symphony Orchestra, Tafelmusik Chamber Choir and several others.[3]

During her most recent mission Payette brought a signed sweater of the famed Montreal Canadiens star Maurice "The Rocket" Richard, stating she had brought "The Rocket" into the rocket to celebrate "The Habs" 100th anniversary.

Payette assisted in the carrying of the Olympic flag in the opening ceremonies of the 2010 Olympic Winter Games in Vancouver, British Columbia.

On September 6, 2011 Payette was honoured with the opening of Julie Payette Public School in Whitby, Ontario.[10]