Julius Nepos[1] (Latin: Flavius Iulius Nepos Augustus; c. 430 – 480) was Western Roman Emperor de facto from 474 to 475 and de jure until 480. He was also the ruler of Roman Dalmatia from 468 to 480. Some historians consider Nepos to be the last Western Roman Emperor, while others consider the western line to have ended with Romulus Augustulus in 476. In contrast, the Eastern Roman Empire and its line of Emperors survived this period of history essentially intact.

Julius Nepos, already in control of a semi-autonomous Dalmatia, was appointed Western Roman Emperor in early 474 by the Eastern Roman Emperor Leo I in an effort to replace the western emperor Glycerius, who was regarded as a usurper. His agnomen of "Nepos" (nephew) was probably earned through a marriage to Leo's wife's niece; it is likely that this relationship also played a significant part in his selection for the western throne.

In June 474, shortly after Nepos arrived in Italy, Glycerius surrendered. Nepos spared his life and appointed him bishop of Salona. Nepos ruled briefly over the whole of the remaining Western Roman Empire, centered in Italy, still the Empire's heartland, and including his native Dalmatia and the remaining parts of Roman Gaul. Nepos' rule in Italy ended in 475, when he was deposed by his magister militum, Orestes. Fleeing from Italy and Orestes without opposition, Nepos returned to Dalmatia, over which he retained control.

In the same year, following the departure of Nepos, Orestes enthroned his own teenage son as the new western emperor with the regnal name Romulus Augustus, in reference to whom the second element is often used in the diminutive "Augustulus" (little Augustus). The reasons for Orestes' decision to crown his son as a puppet-emperor, rather than become emperor himself, are somewhat unclear. In the eyes of Roman law and of the eastern court in Constantinople, however, the status of Romulus as Emperor was unconstitutional. His short reign ended in 476 with the execution of his father and his own subsequent forced abdication, both the result of an uprising led by Odoacer, head of the Germanic Foederati in Italy. Odoacer, the new ruler of the Italian peninsula, sent the teenaged former emperor to Campania in exile or retirement, after which Romulus Augustulus disappears from the historical record.

Although his successor had been deposed, Nepos never returned to Italy; however the "Emperor of the West" continued to reign from Dalmatia, and he still enjoyed some support from Constantinople. Odoacer, attempting to bypass Nepos, used the Roman Senate to petition the newly restored Eastern Emperor, Zeno; he requested the title of Patrician, and sought to end the separate line of Western Emperors. Patrician rank was granted, but at Zeno's insistence Odoacer also grudgingly acknowledged Nepos' Imperial status, and even issued coinage in Nepos' name.

As Patricius, Odoacer ruled over Italy and an expanding sphere of related territories as a viceroy, while technically acknowledging Nepos as Emperor of the West. In practical terms, Odoacer was an increasingly independent King of Italy, nominally recognizing the Empire's suzerainty; Nepos retained claim to the Imperial title, but exercised no real power outside of Dalmatia.

This political solution lasted approximately 4 years. Julius Nepos, still residing in Dalmatia, was murdered by members of his own military in 480, possibly as a result of machinations by Odoacer and/or Glycerius, possibly aggravated by ambitions on Nepos' part to regain control of Italy. The competing desires of various persons to replace him as ruler of Dalmatia probably also played a part in his assassination. After Nepos death, Zeno formally abolished the division of the Empire.

As is the case with many Roman Emperors who reigned for only a short period of time, particularly those from the final decades of the western empire, there is only limited information about Nepos available in surviving records.

Historians claim [2] that Julius Nepos was son of the comes Nepotianus, a general (magister utriusque militiae) who served the Western Roman Empire between 458 and 461 during the reign of Majorian. Nepotianus is mentioned as having been active in southern Gaul and in Hispania, eventually dying in 465.[3] His unnamed mother was a sister of Marcellinus, magister militum of Dalmatia.[4]

This identification has been denied by historian R. W. Burgess, who starts by observing that the claim reposes on a single passage from Jordanes' Romana. He then proceeds to argue that, while Nepos came from an important family, the general Nepotianus was a mercenary commander working for the Visigoths; from which came his title of magister militiae. Thus, Burgess concludes his argument that Nepotianus father of Nepos, and the military commander Nepotianus, should be considered as two different individuals.[2]

The 6th-century chronicler Marcellinus Comes mentions Nepos as "son of the sister of Marcellinus, once patrician".[5] This identification of Nepos is confirmed by a passage in Jordanes' Getica.[1][6] Since Jordanes often uses Marcellinus Comes as a source, the passage might have been copied verbatim.[5]

Marcellinus was a powerful figure in the Western Roman Empire, rebelling in 454 against the Emperor Valentinian III after the latter's assassination of Flavius Aetius. He established himself as an autonomous ruler in Dalmatia, despite accepting the authority of the emperors Majorian and Anthemius. Under Anthemius he was raised to the rank of patrician, becoming a possible threat to Ricimer, the powerful kingmaker behind the western throne. In 468, Marcellinus died in Sicily, probably at the hands of Ricimer.[7][8][9] Nepos inherited control of Dalmatia from his uncle, gaining the title magister militum Dalmatiae,[10] and with it a powerbase which would be integral to his future career.

Nepos may have been a member of an enduringly prominent Dalmatian family. Four memorial inscriptions commemorating similarly named individuals, from the same region and falling within an appropriate time-frame, have been identified: Aelia Nepotes, Aelia Nepos, Julius Nepos, and Nepotes. The name also seems to be preserved in a church inscription of Salona, dating to the early 5th century.[11] Although the association of the agnomen "Nepos" with his connection to the Leonid dynasty seems to be fairly clear, the origins of and relationships between all these similar-sounding names, including his father's, are less clear. Also unclear is what role Nepos' ties of kinship with Marcellinus might have played in the acquisition of his agnomen.

Nepos was married to the niece of Eastern Roman Emperor Leo I, hence his nepos — "nephew" — agnomen, and was named as Emperor in the West by Leo in 474, in order to end the reign of the usurper Glycerius, who had been raised to the throne by the Burgundian magister militum Gundobad in the western capital of Ravenna. Under Roman law, Leo was the sole legitimate Emperor and had the right to select a new western counterpart. He chose Nepos, a relative and already governor of the province of Dalmatia, technically a part of the western empire but in practical terms an autonomous region since at least the time of Marcellinus' rule there. In June 474 Nepos entered Ravenna, forced Glycerius to abdicate, and secured the western throne for himself. Glycerius was exiled to Dalmatia as bishop of the city of Salona, where he and Nepos may have crossed paths again.

Fall and rule in Dalmatia 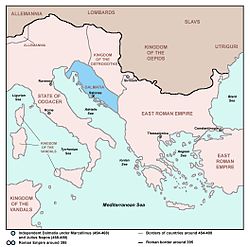 On August 28, 475, Orestes took control of the government at Ravenna and forced Nepos to flee by ship to Dalmatia. Unable to appoint himself as the Western Roman Emperor, Orestes instead appointed his son Romulus Augustus as Romulus was a citizen of Rome. The boy was probably around 12 years old when he became Emperor and is known to history as Romulus Augustulus, meaning Romulus the Little Augustus.

However, Romulus' position was not constitutional inasmuch as he had not been recognised by the Emperor at Constantinople, in whose eyes Nepos was still the sole Augustus of the West.[12] The latter thus continued to rule in Dalmatia as Emperor, recognized as such in Dalmatia and in the eastern court. When Odoacer captured Ravenna, killed Orestes, and deposed Romulus on September 4, 476, he proclaimed himself ruler of Italy and asked the Eastern Roman Emperor Zeno to legalize his position as Patricius of the Roman Empire and Zeno's viceroy in Italy. Zeno did so, but insisted that he recognize Nepos as Western Roman Emperor. Odoacer did this, and even issued coins in Nepos' name throughout Italy. In name at least, the Western Roman Empire continued to exist after 476, but only as a legal formality and as a sop to Imperial tradition.

Similar arrangements might have continued for many years had events not taken another course. First, in about 479, Nepos began to plot against Odoacer, hoping to regain control of Italy for himself. Another possibility, (according to some sources) is that Glycerius, who continued as bishop of Salona, was plotting his revenge. What is certain is that Odoacer perceived Nepos as a threat, and was determined to get rid of him.

Nepos was killed by his own soldiers on one of three possible dates — April 25, May 9 or June 22 — of 480. The April 25 date is probably the correct one.[13] He was reportedly stabbed to death in his villa, near Salona. Since Diocletian also had a residence in the area, it might have been the same building. Marcellinus Comes blames "the treachery of his comes Viator and Ovida" for the murder. Malchus also implicates the former Emperor Glycerius in the conspiracy. Glycerius was after all Bishop of Salona at the time, placing him in the vicinity of the murder.[14]

Ovida served as the next ruler of Dalmatia for a few months, but Odoacer used Nepos' murder as a pretext to invade Dalmatia.[14] Odoacer defeated Ovida's forces on December 9, and added the province to his own kingdom. Adding to the suspicions about Glycerius is a report that Odoacer then made him bishop of Milan.