Born in 1898 in Munich, Bavaria, Schaub served as a field medic during World War I, during which he injured both of his feet. During the hard times which followed during the Great Depression, Schaub joined the Nazi Party. After losing his job because of his membership, Hitler hired him as his personal aide, a position he would hold for 25 years.

Schaub took care of Hitler's personal belongings, papers and travel journeys, making him a notable figure in Hitler's inner circle. In 1924, he was imprisoned with Hitler for his involvement in the coup d'état attempt of November 1923 in Munich. In time he closely befriended Hitler. Later in July 1944, Schaub was present during the military briefing during which a bomb exploded, killing four people and injuring others; Hitler escaped with minor injuries.

Schaub was ordered to leave the Führerbunker in late April 1945 and destroy all of Hitler's personal belongings and papers. He was arrested by the Americans shortly after the war and died in 1967. He was actively involved with Nazi activities. Schaub died on 27 December 1967 in Munich.

Julius Schaub was born on 20 August 1898 in Munich, a largely Catholic city in southern Bavaria.[1] On 28 June 1914, Archduke Franz Ferdinand of Austria and his wife was assassinated by a group of Serbian and Bosnian rebels. This triggered the outbreak of World War I in Europe.[2] On 17 January 1917, Schaub was drafted to serve as a field medic in the German Army.[3] According to Traudl Junge, one of Hitler's private secretaries, both of Schaub's feet had been injured in the war, making him semi-handicapped.[4] By the end of the war, Schaub found work as a contract worker at the Munich Central Supply Office.[3] 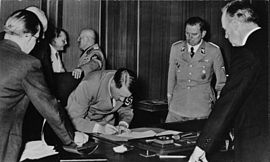 Schaub (on Hitler's left) at the signing of the Munich Agreement, 1938

After defeat in World War I, Germany was plunged into bankruptcy, social injustice, poverty, crime and mass unemployment.[5] During these depressing years, Germany saw the creation of a number of extremist political and paramilitary associations, representing both the far-left and the far-right.[6] Amidst this crisis, Schaub decided to join the National Socialist German Workers Party, later commonly known as the Nazi Party; he became member #81.[1] The political program of the party was essentially a rejection of the terms of the Treaty of Versailles, antisemitism, and anti-Bolshevism, driven by Adolf Hitler and his world view.[7]

After getting involved with the Nazi Party, Schaub lost his job at the Munich Central Supply Office. Upon hearing the news, Hitler hired him as his personal aide-de-camp.[1] Thereafter, Schaub looked after his confidential papers, carried money for Hitler's use and provided both secretary and security duties.[8] A friendship developed, which was evident by Hitler later appearing as a witness at Schaub's second wedding.[4] Junge states that Schaub considered himself to be an "amazingly important, significant person" to the Nazi cause.[4] The Luftwaffe chief Herman Göring, who gave humorous nicknames to almost all in Hitler's inner circle, dubbed Schaub the "Travel Marshal" as he typically took care of Hitler's traveling arrangements and often accompanied him.[9] As Hitler disliked change in personnel and liked to keep familiar faces around him, Schaub was to remain in Hitler's staff for 25 years.[8] He later became Hitler's chief aide and adjutant in October 1940.[10]

In 1923, the Nazis felt strong enough to try to seize power in Munich. They decided to march on the city, inspired by Benito Mussolini's successful march on Rome. Known as the Beer Hall Putsch, Hitler and his paramilitary Sturmabteilung (SA) troops failed to take control of Munich.[11] Schaub and other Nazis were arrested and imprisoned with Hitler at Landsberg Prison.[1] After the 1925 reformation of Nazi Party, Schaub became a founding member of the Schutzstaffel (SS), documented as member #7.[12] 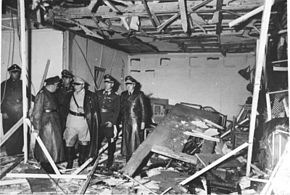 The shattered conference room shortly after the explosion, 1944

Later during World War II, with Germany suffering major defeat on all fronts, colonel Claus von Stauffenberg and his fellow conspirators decided to eliminate Hitler and the Nazi leadership, establish a new pro-Western government and save Germany from total destruction. Stauffenberg had his opportunity on 20 July 1944 at a military briefing at Hitler's East Prussian headquarters known as the "Wolf's Lair".[13] He managed to get through security and plant a briefcase bomb under the conference table. The bomb exploded, fatally wounding three officers and the stenographer who died soon after. Hitler survived with only minor injuries, as did everyone else who was shielded from the blast by the conference table leg.[14]

In the aftermath of the July 20 Plot, as it became known, Hitler had a badge struck to honor all those injured or killed in the blast, the so-called "20 July Wound Badge".[15] Hitler's other aides and those present at the conference later said that Schaub, who was in another building at the time of the explosion, falsely tried to claim he was injured so as to qualify for the badge.[16]

In January 1945, Hitler and his staff had relocated to the Führerbunker.[17] Finally admitting everything was lost, he ordered much of his personal staff to leave Berlin in late April 1945. Schaub was instructed to burn all of Hitler's personal belongings and papers in the garden of the Reich Chancellery.[1] Schaub then flew to Munich and did the same in Hitler's private apartment at the Prinzregentenplatz and then at the Berghof on the Obersalzberg.[1] His final act as aide and adjutant was to destroy Hitler's personal train, the "Führer Sonderzug".[3]

After the war, while possessing false identification papers and introducing himself as "Josef Huber", Schaub was arrested by American troops on 8 May 1945 in Kitzbühl, and remained in custody until 17 February 1949.[3] Ultimately, Schaub was classified by denazification investigators as being only a "fellow traveler" and was not accused or associated with any war crimes. His final rank, promoted in 1944, was SS-Obergruppenführer. Schaub died on 27 December 1967 in his hometown Munich.[1] Junge described Schaub in her memoirs as "extremely kind, but very curious too". She further notes that "for historical purposes, it's not worth saying much about him".[4]