Born Julius Payer, his father Franz Anton Rudolf Payer was a retired officer who died when Julius was only fourteen. Payer attended k.k. cadet school in Łobzów near Cracow (now Poland). Between 1857 and 1859 he studied at the Theresian Military Academy in Wiener Neustadt (near Vienna). In 1859 he served as a sub-lieutenant with the 36th infantry regiment in Verona, Northern Italy. He participated in the 1859 Battle of Solferino. Between 1860 and 1863 he served at the garrison in Verona, Italy. In 1863 Payer was assigned as a history teacher to the cadet school in Eisenstadt, Austria. After promotion to the rank of lieutenant first class he was posted to the garrison of Venetia.

On 24 June 1866 he was heroic at the Battle of Custoza, seizing two guns, and was decorated.

In 1862 he started exploratory tours of the Tyrolean Alps and Hohe Tauern in his free time. After 1864 he explored the Adamello-Presanella Group and the Ortler Alps, making more than 60 first ascents. In 1864 he was, with his guide Giovanni Caturani, the first to climb Adamello (3,554 m) and missed making the first ascent of the Presanella (3,558 m) by just three weeks. All his explorations in the Ortler massif (from 1865 to 1868) were guided by de:Johann Pinggera from Sulden. Together, often accompanied by a porter, they ascended almost all significant unclimbed summits, including the Hoher Angelus (3,521 m), Vertainspitze (3,545 m), Palon de la Mare (3,703 m), Monte Zebru (3,735), and Monte Cevedale (3,769 m). Their new approach to the Ortler (3,905 m) became the normal route of ascent ever since. His tours resulted in creating a detailed topographical map at a scale 1:56,000. Due to his achievements, Payer was transferred to the Austrian Military Cartographical Institute in Vienna. When in 1875, the first Alpine club hut above 3000 m was built on the normal route to the Ortler, it was named de:Payerhütte in his honor. 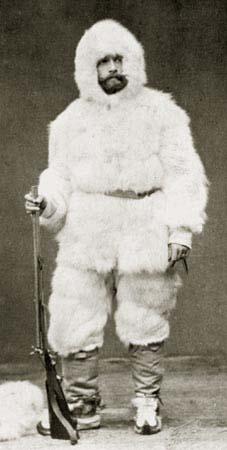 In 1868 he was invited by the German geographer August Petermann to participate in the 1869-1870 2nd German North Polar Expedition (Germania under Carl Koldewey).

In 1871 he participated in the preliminary Austro-Hungarian expedition to Novaya Zemlya, with Karl Weyprecht.

From 1872-1874 he led the Austro-Hungarian North Pole Expedition with Karl Weyprecht, who was Commander at sea, while Payer was Commander at shore. During this voyage he made the discovery of Franz Joseph Land, however upon his return to Vienna many critics voiced doubts about its existence and about the experiences of other participants in the expedition. Payer could have proven his statements using testimonies, diaries and sketches, however his efforts were thwarted, including his promotion to Captain. In 1874 he resigned from the army because of political maneuvers against him and his brother officers' doubts about his discovery and his sledge journeys. He was awarded 44 Austro-Hungarian gulden on 1 October 1874 for the discovery of Franz Joseph Land (about equal to the monthly salary of a Sub-lieutenant at the time). He was also awarded the 1975 Royal Geographical Societys Patron's Gold Medal.[1] 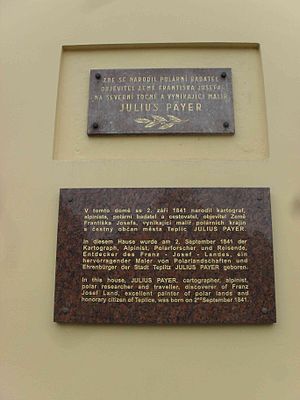 In 1877 Ritter von Payer married the ex-wife of a banker from Frankfurt am Main. They later had two children, Jules and Alice.

From 1877-1879 he studied painting at the Städelsches Institut in Frankfurt / Main. From 1880-1882 he continued his study of art at the Akademie der bildenden Künste in München.

In 1890 he divorced his wife, returned to Vienna and founded a painting school for ladies.

In 1895 he planned a trip for painting to Kejser Franz Joseph Fjord in northeastern (Greenland).

In 1912 he planned (at the age of seventy) an expedition in a submarine to the North Pole.

Besides the Payerhütte mentioned above and several streets in Vienna, the main island of Franz Josef Land (Payer Island), the Payer Mountains in Antarctica and Payer Land in eastern Greenland have been named after Julius von Payer.

The southern satellite camp for the PolAres MARS2013 analog mission by the OeWF, approximately 80 km south of the base camp near Erfoud, Morocco, was named Station Payer during February 2013, after the main base camp had been called Camp Weyprecht during the landing ceremony in the morning of February 11, 2013. 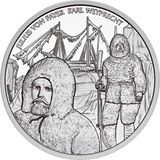 The Admiral Tegetthoff Ship and The Polar Expedition commemorative coin

He died in Veldes, in former upper Carniola, today part of Slovenia