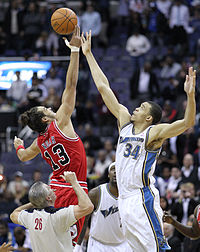 The jump ball that starts the game, known as the opening tip, takes place at center court.

A jump ball is a method used to begin or resume play in basketball. It is similar to a face-off in ice hockey or field lacrosse, or ball-up in Australian rules football. Two opposing players attempt to gain control of the ball after it is tossed up into the air in between them by an official.

In the NBA, WNBA or competitions operated by the Euroleague Basketball Company, a jump ball occurs at the start of the game (called the opening tip or tip off), the start of any extra period, to settle special situations where penalties cancel out and neither team is previously entitled to the ball, and to settle any held balls. Held balls occur when two opposing players both lay equal claim to the ball, and after trying to wrestle it from each other, end up in a stalemate. A jump ball may also be called if there are different calls by two or more referees.

However, most competitions other than the NBA, WNBA, Euroleague Company (all entire game) and the UAAP (in the final two minutes of a game and overtime in UAAP only) use the alternating possession rule to settle all jump ball situations after the opening tip. This uses a possession arrow on the scorekeeper's table. Whenever such a jump ball situation occurs, the team whose basket that the possession arrow is currently pointing to gets the ball. The arrow then swaps to point to the other team. At the start of the game, the arrow points to the team that lost the opening tip.

FIBA, with recommendation by NCAA Men's Supervisor of Officials Hank Nichols, on the FIBA World Technical Commission at the time, adopted the alternating possession rule in 2003, with a major difference. In overtime periods, play begins with the arrow. In other organizations, another jump ball is conducted.

Uniquely, 3x3, a formalized version of halfcourt three-on-three basketball overseen by FIBA, does not use a jump ball at any time in a game. Under current (2013) rules, the first possession is based on the result of a pregame coin toss; the winner can choose to have the first possession either at the start of the game or at the start of a potential overtime. During the game, held balls are automatically awarded to the defensive team.[1]