A juniper berry is the female seed cone produced by the various species of junipers. It is not a true berry but a cone with unusually fleshy and merged scales, which give it a berry-like appearance. The cones from a handful of species, especially Juniperus communis, are used as a spice, particularly in European cuisine, and also give gin its distinctive flavour. Juniper berries have been called the only spice derived from conifers,[1] although tar and inner bark (used as a sweetener in Apache cuisines) from pine trees is sometimes considered a spice as well.[citation needed] 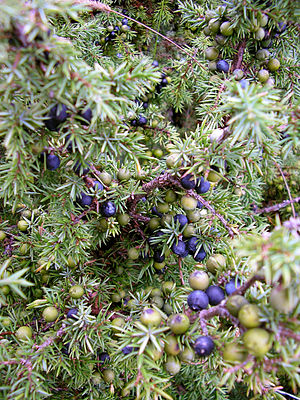 Mature purple and younger green juniper berries can be seen growing alongside one another on the same plant.

All juniper species grow berries, but some are considered too bitter to eat. In addition to J. communis, other edible species include Juniperus drupacea,[2][3] Juniperus phoenicea,[4] Juniperus deppeana, and Juniperus californica.[5] Some species, for example Juniperus sabina, are toxic and consumption is inadvisable.[6]

Juniperus communis berries vary from four to twelve millimeters in diameter; other species are mostly similar in size, though some are larger, notably J. drupacea (20–28 mm). Unlike the separated and woody scales of a typical pine cone, those in a juniper berry remain fleshy and merge into a unified covering surrounding the seeds. The berries are green when young, and mature to a purple-black colour over about 18 months in most species, including J. communis (shorter, 8–10 months in a few species, and about 24 months in J. drupacea).[2] The mature, dark berries are usually but not exclusively used in cuisine, while gin is flavoured with fully grown but immature green berries.[1] 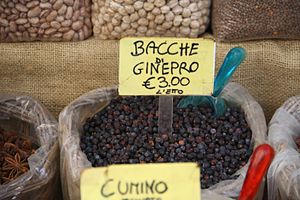 Dried juniper berries at a market in Syracuse, Sicily

The flavor profile of young, green berries is dominated by pinene; as they mature this piney, resinous backdrop is joined by what Harold McGee describes as "green-fresh" and citrus notes.[7] The outer scales of the berries are relatively flavourless, so the berries are almost always at least lightly crushed before being used as a spice. They are used both fresh and dried, but their flavour and odour are at their strongest immediately after harvest and decline during drying and storage.

Juniper, typically Juniperus communis, is used to flavor gin, a liquor developed in the 17th century in the Netherlands. The name gin itself is derived from either the French genièvre or the Dutch jenever, which both mean "juniper".[1] Other juniper-flavoured beverages include the Finnish rye-and-juniper beer known as sahti, which is flavored with both juniper berries and branches.[10] The brand Dry Soda produces a juniper-berry soda as part of its lineup. Recently, some American distilleries have begun using 'New World' varieties of juniper such as Juniperus occidentalis.[11]

Juniper berry was first intended as a medication since juniper berries are a diuretic and were also thought to be an appetite stimulant and a remedy for rheumatism and arthritis. Native Americans are reported to have used the juniper berry as an appetite suppressant in times of hunger. Juniper berry is being researched as a treatment for diet-controlled diabetes, as it releases insulin from the pancreas, hence alleviating hunger. It is also said to have been used by some tribes as a female contraceptive.

A few North American juniper species produce a seed cone with a sweeter, less resinous flavor than those typically used as a spice. For example, one field guide describes the flesh of the berries of Juniperus californica as "dry, mealy, and fibrous but sweet and without resin cells".[12] Such species have been used not just as a seasoning but as a nutritive food by some Native Americans.[13] In addition to medical and culinary purposes, Native Americans have also used the seeds inside juniper berries as beads for jewelry and decoration.[13]

An essential oil extracted from juniper berries is used in aromatherapy and perfumery.[4] The essential oil can be distilled out of berries which have already been used to flavour gin.[1]

Juniper berries, including Juniperus phoenicea and Juniperus oxycedrus have been found in ancient Egyptian tombs at multiple sites. J. oxycedrus is not known to grow in Egypt, and neither is Juniperus excelsa, which was found along with J. oxycedrus in the tomb of Tutankhamun.[14] The berries imported into Egypt may have come from Greece; the Greeks record using juniper berries as a medicine long before mentioning their use in food.[15] The Greeks used the berries in many of their Olympics events because of their belief that the berries increased physical stamina in athletes.[16] The Romans used juniper berries as a cheap domestically produced substitute for the expensive black pepper and long pepper imported from India.[4] It was also used as an adulterant, as reported in Pliny the Elder's Natural History: "Pepper is adulterated with juniper berries, which have the property, to a marvellous degree, of assuming the pungency of pepper."[17] Pliny also incorrectly asserted that black pepper grew on trees that were "very similar in appearance to our junipers".