In finance, a high-yield bond (non-investment-grade bond, speculative-grade bond, or junk bond) is a bond that is rated below investment grade. These bonds have a higher risk of default or other adverse credit events, but typically pay higher yields than better quality bonds in order to make them attractive to investors. Sometimes the company can provide new bonds as a part of yield which can only be redeemed after its expiry or maturity.

The holder of any debt is subject to interest rate risk and credit risk, inflationary risk, currency risk, duration risk, convexity risk, repayment of principal risk, streaming income risk, liquidity risk, default risk, maturity risk, reinvestment risk, market risk, political risk, and taxation adjustment risk. Interest rate risk refers to the risk of the market value of a bond changing due to changes in the structure or level of interest rates or credit spreads or risk premiums. The credit risk of a high-yield bond refers to the probability and probable loss upon a credit event (i.e., the obligor defaults on scheduled payments or files for bankruptcy, or the bond is restructured), or a credit quality change is issued by a rating agency including Fitch, Moody's, or Standard & Poors.

A credit rating agency attempts to describe the risk with a credit rating such as AAA. In North America, the five major agencies are Standard & Poor's, Moody's, Fitch Ratings, Dominion Bond Rating Service and A.M. Best. Bonds in other countries may be rated by US rating agencies or by local credit rating agencies. Rating scales vary; the most popular scale uses (in order of increasing risk) ratings of AAA, AA, A, BBB, BB, B, CCC, CC, C, with the additional rating D for debt already in arrears. Government bonds and bonds issued by government-sponsored enterprises (GSEs) are often considered to be in a zero-risk category above AAA; and categories like AA and A may sometimes be split into finer subdivisions like "AA−" or "AA+".

The lower-rated debt typically offers a higher yield, making speculative bonds attractive investment vehicles for certain types of portfolios and strategies. Many pension funds and other investors (banks, insurance companies), however, are prohibited in their by-laws from investing in bonds which have ratings below a particular level. As a result, the lower-rated securities have a different investor base than investment-grade bonds.

The value of speculative bonds is affected to a higher degree than investment grade bonds by the possibility of default. For example, in a recession interest rates may drop, and the drop in interest rates tends to increase the value of investment grade bonds; however, a recession tends to increase the possibility of default in speculative-grade bonds.

The original speculative grade bonds were bonds that once had been investment grade at time of issue, but where the credit rating of the issuer had slipped and the possibility of default increased significantly. These bonds are called "fallen angels".

In 2005, over 80% of the principal amount of high-yield debt issued by U.S. companies went toward corporate purposes rather than acquisitions or buyouts.[1]

In emerging markets, such as China and Vietnam, bonds have become increasingly important as term financing options, since access to traditional bank credits has always been proved to be limited, especially if borrowers are non-state corporates. The corporate bond market has been developing in line with the general trend of capital market, and equity market in particular.[2]

High-yield bonds can also be repackaged into collateralized debt obligations (CDO), thereby raising the credit rating of the senior tranches above the rating of the original debt. The senior tranches of high-yield CDOs can thus meet the minimum credit rating requirements of pension funds and other institutional investors despite the significant risk in the original high-yield debt. 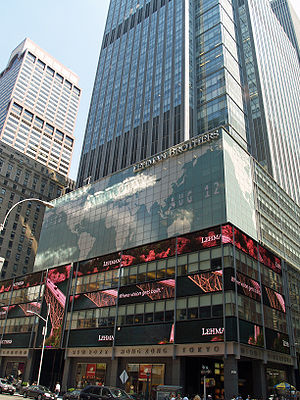 When such CDOs are backed by assets of dubious value, such as subprime mortgage loans, and lose market liquidity, the bonds and their derivatives become what is referred to as "toxic debt". Holding such "toxic" assets led to the demise of several investment banks such as Lehman Brothers and other financial institutions during the subprime mortgage crisis of 2007–09 and led the US Treasury to seek congressional appropriations to buy those assets in September 2008 to prevent a systemic crisis of the banks.[3]

Such assets represent a serious problem for purchasers because of their complexity. Having been repackaged perhaps several times, it is difficult and time-consuming for auditors and accountants to determine their true value. As the recession of 2008–09 bites, their value is decreasing further as more debtors default, so they represent a rapidly depreciating asset. Even those assets that might have gone up in value in the long-term are now depreciating rapidly, quickly becoming "toxic" for the banks that hold them.[4] Toxic assets, by increasing the variance of banks' assets, can turn otherwise healthy institutions into zombies. Potentially insolvent banks have made too few good loans creating a debt overhang problem.[5] Alternatively, potentially insolvent banks with toxic assets will seek out very risky speculative loans to shift risk onto their depositors and other creditors.[6]

On March 23, 2009, U.S. Treasury Secretary Timothy Geithner announced a Public-Private Investment Partnership (PPIP) to buy toxic assets from banks' balance sheets. The major stock market indexes in the United States rallied on the day of the announcement rising by over six percent with the shares of bank stocks leading the way.[7] PPIP has two primary programs. The Legacy Loans Program will attempt to buy residential loans from banks' balance sheets. The Federal Deposit Insurance Corporation will provide non-recourse loan guarantees for up to 85 percent of the purchase price of legacy loans. Private sector asset managers and the U.S. Treasury will provide the remaining assets. The second program is called the legacy securities program which will buy mortgage backed securities (RMBS) that were originally rated AAA and commercial mortgage-backed securities (CMBS) and asset-backed securities (ABS) which are rated AAA. The funds will come in many instances in equal parts from the U.S. Treasury's Troubled Asset Relief Program monies, private investors, and from loans from the Federal Reserve's Term Asset Lending Facility (TALF). The initial size of the Public Private Investment Partnership is projected to be $500 billion.[8] Nobel Prize–winning economist Paul Krugman has been very critical of this program arguing the non-recourse loans lead to a hidden subsidy that will be split by asset managers, banks' shareholders and creditors.[9] Banking analyst Meredith Whitney argues that banks will not sell bad assets at fair market values because they are reluctant to take asset write downs.[10] Removing toxic assets would also reduce the volatility of banks' stock prices. Because stock is akin to a call option on a firm's assets, this lost volatility will hurt the stock price of distressed banks. Therefore, such banks will only sell toxic assets at above market prices.[11]

On 27 April 2010, the Greek debt rating was decreased to "junk" status by Standard & Poor's amidst fears of default by the Greek Government.[12] They also cut Portugal's credit ratings by two notches to A, over concerns about its state debt and public finances on 28 April.[13] On 5 July 2011, Portugal's rating was decreased to "junk" status by Moody's (by four notches from Baa1 to Ba2) saying there was a growing risk the country would need a second bail-out before it was ready to borrow money from financial markets again, and private lenders might have to contribute.[14]

On 13 July 2012, Moody's cut Italy's credit rating two notches, to Baa2 (leaving it just above junk). Moody's warned the country it could be cut further.

With the ongoing deleveraging process within the European banking system, many European CFOs are still issuing high-yield bonds. As a result, by the end of September 2012, the total amount of annual primary bond issuances stood at €50 billion. It is assumed that high-yield bonds are still attractive for companies with a stable funding base, although the ratings have declined continuously for most of those bonds.[15]