From Infogalactic: the planetary knowledge core
(Redirected from Jura mountains)
Jump to: navigation, search
Not to be confused with Montes Jura.

The Jura Mountains (French pronunciation: ​[ʒyʁa]) are a sub-alpine mountain range located north of the Western Alps, mainly following the course of the France–Switzerland border. The Jura separates the Rhine and Rhône basins, forming part of the watershed of each.

The name "Jura" is derived from juria, a Latinized form of a Celtic stem jor- "forest".[1][2][3] The mountain range gives its name to the French department of Jura, the Swiss Canton of Jura, the Jurassic period of the geologic timescale, and the Montes Jura of the Moon.

The Jura Mountains are a distinct province of the larger Central European uplands.

In France, the Jura covers most of the Franche-Comté region, stretching south into the Rhône-Alpes region. The range reaches its highest point at Le Crêt de la Neige in the department of Ain and finds its southern terminus in the northwestern part of the department of Savoie. The north end of the Jura extends into the southern tip of the Alsace region. Roughly 1,600 square kilometers of the mountain range in France is protected by the Jura Mountains Regional Natural Park.

The Swiss Jura is one of the three distinct geographical regions of Switzerland, the other being the Swiss plateau and the Swiss Alps. In Switzerland, the range covers the western border with France in the cantons of Basel-Landschaft, Solothurn, Jura, Bern (i.e., Bernese Jura), Neuchâtel, Vaud. Much of the Swiss Jura region has no historical association with Early Modern Switzerland and was incorporated as part of the Swiss Confederacy only in the 19th century. In the 20th century, a movement of Jurassic separatism developed which resulted in the creation of the canton of Jura in 1979. The Swiss Jura has been industrialized since the 18th century and became a major center of the watchmaking industry. The area has several cities at very high altitudes, such as La Chaux-de-Fonds, Le Locle, and Sainte-Croix (renowned for its musical boxes), however, it generally has had a marked decline in population since 1960.

The Jura range proper (known as "folded Jura", Faltenjura) is continued as the Table Jura in the cantons of Basel-Landschaft and Aargau, and further to Schaffhausen and into southern Germany towards the Swabian and Franconian plateaus. 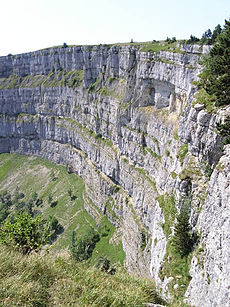 The range is built up vertically while decreasing in size laterally (along a rough northwest–southeast line). This deformation accommodates the compression from alpine folding as the main Alpine orogenic front moves roughly northwards. The deformation becomes less pervasive away from the younger, more active Alpine mountain building.

Structurally, the Jura consists of a sequence of geologic folds, the formation of which is facilitated by an evaporitic decollement layer. The box folds are still relatively young, which is evident by the general shape of the landscape showing that they have not existed long enough to experience erosion, thus revealing recent mountain building.

The Jura range offer a variety of tourist activities including hiking, cycling, skiing and cross-country skiing. There are many signposted trails including the Jura ridgeway, a 310 km hiking route.

Both Le Locle and its geographical twin town La Chaux-de-Fonds are recognised as an UNESCO World Heritage Site for their horological and related cultural past. The 11th-century Fort de Joux, famously remodeled and strengthened by Vauban in 1690 and subsequently by other military engineers, is situated on a natural rock outcropping in the middle of the range not far from Pontarlier.

Part of the A40 autoroute crosses through a portion of the southern Jura between Bourg-en-Bresse and Bellegarde-sur-Valserine, which is known as the "Highway of the Titans".