The Jurassic Coast is a World Heritage Site on the English Channel coast of southern England. It stretches from Orcombe Point near Exmouth in East Devon to Old Harry Rocks near Swanage in East Dorset, a distance of 96 miles (155 kilometres).[1] Chartered in 2001, the Jurassic coast was the second wholly natural World Heritage Site to be designated in the United Kingdom. Its entire length can be walked on the South West Coast Path.[2] The site was featured on the television programme Seven Natural Wonders as one of the wonders of the South West (of the UK), and in a 2005 poll of Radio Times readers, the Jurassic Coast was named as the fifth-greatest natural wonder in Britain.

The site shows excellent examples of landforms, including the natural arch at Durdle Door, the cove and limestone folding at Lulworth Cove and an island, the Isle of Portland. Chesil Beach is a fine example of both a tombolo (a deposition landform in which an island is attached to the mainland by a narrow piece of land such as a spit or bar) and a storm beach (a beach affected by particularly fierce waves). The site has stretches of both concordant and discordant coastlines. Due to the quality of the varied geology, the site is the subject of international field studies. This area was home to Mary Anning, a palaeontologist who studied the fossils of the coastline around Lyme Regis and discovered the first complete Ichthyosaur fossil at the Spittles.

The highest point on the Jurassic Coast, and on the entire south coast of Britain, is Golden Cap at 191 metres (627 ft). 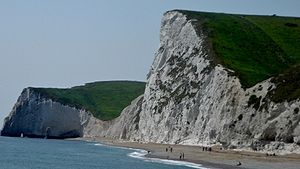 Coastal rock in the Jurassic Coast 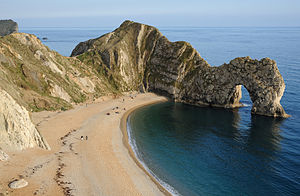 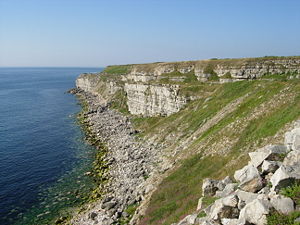 The Jurassic limestones on the Isle of Portland have been extensively quarried. 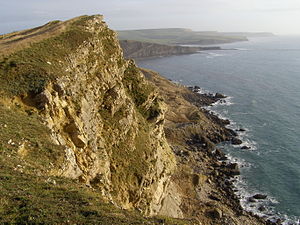 During World War II several sections of the Jurassic Coast became property of the Ministry of War. One of the Royal Navy's largest bases was at Portland Harbour, though it has since closed. A major army base at Bovington remains in use today, and large areas of land, including the coast between Lulworth Cove and Kimmeridge, including Tyneham ghost village, are still only partially accessible. Areas of the coast near Exmouth, The Fleet at Weymouth and the beaches at Studland have also been used for training for war, but have since been returned to civilian use.

Sea stacks, such as Old Harry's Rocks at Handfast Point, are an occasional feature of the coast.

Parts of the coast, especially around Portland, can be dangerous, and shipwrecks have been a feature of the coast. In January 2007 the coast experienced its most environmentally damaging wreck when the MSC Napoli, a 2,400 capacity container ship, was beached at Branscombe near Sidmouth, losing oil and cargo.[3]

Landslips and rockfalls are a continuing feature of the evolution of this coast. On May 6, 2008, a 400-metre (1,312 ft) section of the coast was dramatically re-shaped after a landslip that was described as the worst in 100 years.[4]

The Jurassic Coast is largely an eroding landscape and management of the site aims to allow the natural processes involved while protecting people and property.[5]

These are access points to the Jurassic Coast and provide a range of services which support conservation and the management of the World Heritage Site, as well as being destinations in their own right.

Various visitor centres and museums provide an additional concentration of information and interpretations on or of the Jurassic Coast, particularly from a local perspective. The following museums and heritage centres are recommended by the World Heritage Site Management:

A World Heritage Coast Centre was to be built in Weymouth by 2011.[6]

To see the towns and localities along the coast from west to east see:

File:Orcombe Point Geoneedle.jpg
The geoneedle is made from different rocks along the Jurassic Coast and marks its western end at Orcombe Point near Exmouth, Devon.