Jurgen Van den Broeck (born 1 February 1983) is a Belgian professional road bicycle racer who riders for the UCI WorldTeam Team Katusha–Alpecin. He specializes in the time trial, having been Junior World Champion against the clock in 2001. The promise he first displayed in minor stage races like the Tour de Romandie and Eneco Tour was later validated and confirmed by top-10 finishes in all three Grand Tours: the Giro d'Italia, the Tour de France and the Vuelta a España.

Born in Herentals, Van den Broeck won the Junior World Time Trial Championship in 2001 and made his pro debut in 2003 as a stagiaire for the Quick Step-Davitamon-Latexco team.

Rather than remaining in Belgium, however, Van den Broeck signed with the American U.S. Postal Service of Lance Armstrong for his first full season as a professional in 2004. His only result of note that year was 6th-place overall in the Tour of Belgium.

Van den Broeck remained with Johan Bruyneel's team in 2005 when Discovery Channel took over the title sponsorship, and he continued with the Americans in 2006 after Armstrong retired. During that period he finished on the podium in stages of the Deutschland Tour and the Tour of Belgium (where he also won the KOM classification), and he rode to a top-20 finish overall in the Tour de Romandie. In June, however, Van den Broeck announced his intention to return to Belgium when he agreed to a two-year contract with the then-Davitamon squad, which would be re-branded in 2007 as Predictor–Lotto. The following month Van den Broeck scored his first win as a professional, taking the Schriek, Derny in Belgium ahead of Erwin Vervecken and future cyclocross world champion Niels Albert.[2] (Previous winners included Nick Nuyens, Dave Bruylandts, Jo Planckaert and Sven Nys).[3]

At the age of 24, Van den Broeck managed to finish in the top-10 on GC at the 2007 Eneco Tour with his new team, though he also won the bronze medal in the Belgian National Time Trial Championships.[4] After completing his first Grand Tour in an anonymous 74th place at the 2007 Giro d'Italia, Van den Broeck finally showed that he had talent as a stage racer when he returned to Italy the following year and came seventh overall in the 2008 Giro d'Italia. Merely months later, both Riccardo Riccò and Emanuele Sella – respectively finishing 2nd and 6th in the 2008 Giro d'Italia – were sanctioned for doping. 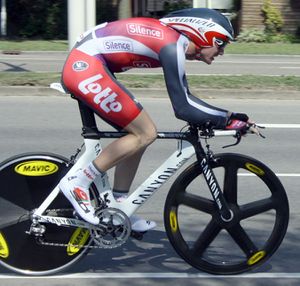 Showing excellent form in the 2009 Tour de France, Van den Broeck climbed with the leaders through the Alps. And although he had crashed heavily on the 4th stage (a team time trial), and lost more than seven minutes, his consistency resulted in 15th place in the GC ranking (which was later improved to 14th after the disqualification of 11th placed Mikel Astarloza for testing positive for EPO) and 9th place in the competition for the polka dot jersey. As the performances came at the end of Cadel Evans tenure at Silence-Lotto, the Belgian outfit decided that van den Broeck was capable and reliable enough to become their GC leader.

The following season he rode to an important and somewhat surprising 4th place (5th place before Contador's disqualification) in the 2010 Tour de France, becoming the first Belgian to finish in the top 5 since Claude Criquielion in 1986. After the Tour Van den Broeck won two criteriums: one in Peer and the other in his hometown of Herentals.

In the 2011 Tour de France, after an encouraging first week and while aiming for a GC podium spot, Van den Broeck had to abandon the race along with another GC-hopeful, Alexander Vinokourov, after a massive and spectacularly grim downhill crash which left him with a pneumothorax, broken ribs and a fractured shoulder.[5] Not to be deterred, however, Van den Broeck recovered from his injuries in time to compete in the 2011 Vuelta a España, where he finished 8th in GC.

In 2012, Van den Broeck finished 3rd in the Volta a Catalunya and has finished 5th in the Criterium du Dauphiné, showing good form for the upcoming Tour de France. On Stage 7 of the 2012 Tour de France, a mountain top finish at Plateau de Beille, Van den Broeck lost 1 minute 54 seconds to stage winner Chris Froome after getting a flat just before the final climb. However Van den Broeck then showed his good form in the mountains to move him up to finishing 4th overall.

In 2013, Van den Broeck abandoned in the Tour de France after he crashed in stage 5.

In 2015, he finished twelfth at the Giro d'Italia. In June, he won the National Time Trial Championships for the first time in his career.[6] In September Team Katusha announced that Van Den Broeck would join them for 2016, after nine seasons with Lotto.[7]