The Justice Party USA is a political party in the United States. It was organized in November 2011 by a group of political activists including former Mayor of Salt Lake City Rocky Anderson as an alternative to what he saw as a duopoly of the two major political parties. One of the major goals of the Justice Party is removing corporate influence and other concentrated wealth from politics.[4] 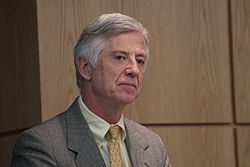 In December 2011, it became a qualified party in Mississippi, the first state to recognize the party.[5] From a small beginning, 30 persons at the launching event with no TV crew covering it, the party was able to put its founder, Rocky Anderson, on the ballot in 15 states and secure official write-in status in 15 additional states. It was the fifth largest third party in terms of presidential ballot access in the 2012 presidential election.[6] On October 23, 2012, Rocky Anderson, the Justice Party candidate faced off with other 3rd party candidates Gary Johnson of the Libertarian Party, Jill Stein of the Green Party and Virgil Goode of the Constitution Party, for a debate moderated by former CNN talk-show host Larry King.[2] They met again to debate on November 5, 2012, this time hosted by Ralph Nader.[7]

The party released a draft statement endorsing Bernie Sanders for the 2016 Democratic nomination rather than nominating its own candidate, but no official announcement has been made.[8]

The Justice Party was created with the motto “economic, environmental, and social justice for all”.[2] The party was designed with the intention of shifting government back to a focus on the Constitution by removing corporate influence in politics.[2]

The Justice Party supports campaign finance reform; and does not accept any corporate funding. The Justice Party supports a constitutional amendment to abolish corporate personhood through Move to Amend. The party is in favor of a financial transaction tax, pro-progressive tax structure and wants to end the Bush tax cuts. They support green jobs and infrastructure programs. The Justice Party wants to bolster social security by raising the cap on payroll taxes. It wants to require that banks work with homeowners to stop foreclosures. It is pro-immigration reform, pro-breaking up large banks, pro-reinstating Glass-Steagall, pro-government funded higher education,and against subsidies to oil and gas companies.[9]

The party is for aggressive climate protection. It is against the Keystone Pipeline; and advocates transition from fossil fuels to renewable energy. The Justice Party supports a ban on mountaintop removal and wants to strengthen the Environmental Protection Agency.[9]

In the 2012 elections, the party had candidates for the following offices: