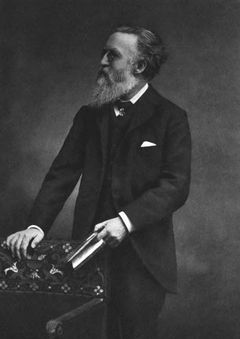 Justin McCarthy (22 November 1830 – 24 April 1912) was an Irish nationalist and Liberal historian, novelist and politician. He was a Member of Parliament (MP) from 1879 to 1900, taking his seat in the House of Commons of the United Kingdom of Great Britain and Ireland.

McCarthy was born in Cork City, Cork, and was educated there. He began his career as a journalist, aged 18, in Cork. From 1853 to 1859 he was in Liverpool, on the staff of the Northern Daily Times. In March 1855, he married Charlotte Ailman. In 1860 he moved to London, as parliamentary reporter to The Morning Star, of which he became editor in 1864. He gave up his post in 1868, and, after a lecturing tour in the United States, joined the staff of the Daily News as leader-writer in 1870. In this capacity he became one of the most useful and respected upholders of the liberal politics of the time. He lectured again in America in 1870–71, and again in 1886–87.[citation needed] 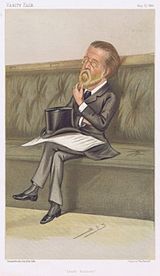 McCarthy was first elected to Parliament at a by-election on 4 April 1879, when he was returned unopposed as a Home Rule League MP for County Longford.[1] He was re-elected unopposed as a Parnellite Home Ruler in 1880,[2] and when the two-seat Longford constituency was split into two divisions under the Redistribution of Seats Act, he was elected as an Irish Parliamentary Party member for the new single-seat Northern division of Longford. His sole opponent, a Conservative, won only 6% of the votes.[3]

At the 1886 general election, he was returned unopposed in North Longford,[4] but had also stood in Londonderry City, where he was declared to have lost to the Unionist candidate by the narrow margin of 1778 votes to 1781.[5] However, the result was later overturned on peition, and McCarthy opted to sit for Derry City. During the divorce controversy surrounding Charles Stewart Parnell in November 1890, the British Prime Minister Gladstone expressed a warning, given to Justin McCarthy as intermediary, that if Parnell retained leadership of the Irish Parliamentary Party it would mean the loss of the next election, the end of their alliance and Home Rule. When the annual party leadership election meeting was called later that month, this threat was somehow not conveyed to the members, who re-elected Parnell leader of the Party.[citation needed]

After a further historical meeting of the Irish Party MPs early December, Parnell refused to retire, and the Party divided. McCarthy became chairman of the Anti-Parnellite group, or the Irish National Federation for a year in 1891–1892; but his nationalism was of a temperate and orderly kind, and though his personal distinction singled him out for the chairmanship during the party dissensions of this period, he was in no active sense the political leader.[citation needed]

Justin McCarthy in his study at Westgate-on-Sea

It has been claimed that McCarthy's true vocation was literature.[7] His earliest publications were novels, some of which, such as A Fair Saxon (1873), Dear Lady Disdain (1875), Miss Misanthrope (1878), Donna Quixote (1879), attained considerable popularity. His most important work is his History of Our Own Times (vols. i.iv., 1879–1880; vol. v., 1897),which treats of the period between Queen Victoria's accession and her Diamond Jubilee. He began a History of the Four Georges (1884–1901); the latter half was written by his son, Justin Huntly McCarthy.[citation needed]

He also collaborated on three novels with Rosa Campbell Praed: The Right Honourable (1886), The Rebel Rose (issued anonymously in 1888 but appeared in their joint names in two later editions under the title, The Rival Princess), and The Ladies' Gallery (1888). They also collaborated on The Grey River, a book on the Thames, which was illustrated with etchings by Mortimer Menpes. He wrote The Story of Gladstone (1904), a somewhat uncritical biography of William Ewart Gladstone.[citation needed]

McCarthy married in 1855, they had a son Justin Huntly McCarthy born in 1859 who also became a Member of Parliament, and they had a daughter Charlotte born in 1872. McCarthy died in Folkestone, Kent, England on 24 April 1912.[8]