From Infogalactic: the planetary knowledge core
(Redirected from Köfte)
Jump to: navigation, search 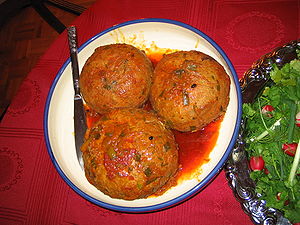 Tabriz köftesi is a regional variation from Iran, which contains yellow split peas in addition to the minced meat. 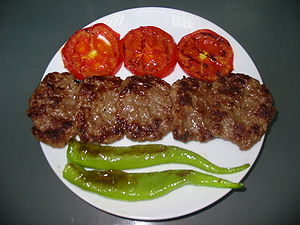 Akçaabat köftesi from Akçaabat, a famous dish in Turkish cuisine.

In Kolkata (Calcutta), kofta is often made from paneer. 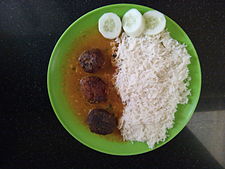 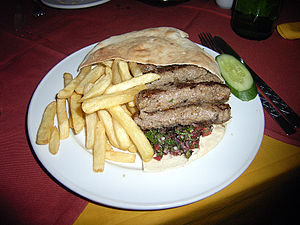 Egyptian kofta, prepared as "fingers" in the typical Arab world style, is served in a sandwich with french fries and salad. 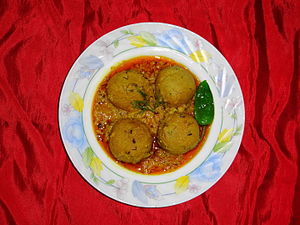 Kofta (see section Name for other names) is a type of meatball or meatloaf, and is a popular dish in Afghan, Azerbaijani, Arab, Armenian, Balkan, Bangladeshi, Indian, Palestinian, Iranian, Israeli, Jordanian, Kurdish, Moroccan, Pakistani, Romanian, Lebanese, and Turkish cuisine. In the simplest form, koftas consist of balls of minced or ground meat—usually beef, chicken, lamb or pork—mixed with spices and/or onions. In Bangladesh, Pakistan, Turkey, Azerbaijan, Iran, koftas are usually made from lamb, beef, mutton or chicken, whereas Greek and Cypriot varieties, as well as other variations from the Balkans, are usually made from pork, beef or veal, or a mixture of the three. In India, vegetarian varieties include koftas made from potato, calabash, paneer or banana.

Koftas in India are usually served cooked in a spicy curry/gravy and are eaten with boiled rice or a variety of Indian breads. In Iran, Iraq and Azerbaijan, koftas are served with a spiced gravy, as dry variations are considered to be kebabs. Shrimp and fish koftas are found in South India, West Bengal, some parts of the Persian Gulf, and parts of Egypt.

The meat is often mixed with other ingredients, such as rice, bulgur, vegetables, or eggs to form a smooth paste. They can be grilled, fried, steamed, poached, baked or marinated, and may be served with a rich spicy sauce. Koftas are sometimes made from fish or vegetables rather than red meat, especially in India; deep-fried kofta made from shrimp is known in Egypt.[1] Variations occur in North Africa, the Mediterranean, the Balkans, and India. According to a 2005 study done by a private food company, there were 291 different kinds of kofta in Turkey. [2] In the Arab world, kufta is usually shaped into cigar-shaped cylinders.

Early recipes (included in some of the earliest known Arabic cookbooks) generally concern seasoned lamb rolled into orange-sized balls, and glazed with egg yolk and sometimes saffron. This method was taken to the West and is referred to as "gilding" or "endoring". Many regional variations exist, notable among them include the unusually large Azerbaijani (Iranian) Tabriz kuftesi, having an average diameter of 20 cm, (8 in).[3] and despite its association with Iran.

In Central Asia, kofta is cooked with liberal amounts of tail fat.[4] Koftas were introduced in South Asia following the Turkic conquests in the region, particularly by the Mughals. Koftas in Indian, Bangladeshi and Pakistani cuisine are normally cooked in a spiced gravy, or curry, and sometimes simmered with hard-boiled eggs. Kofta dishes are very popular with immigrants from the South Asia to the United Kingdom, and are widely available from many Pakistani and Indian restaurants. Vegetarian koftas are eaten by a large population in India. The British dish Scotch egg may have been inspired by the Mughlai dish Nargisi kofta ("Narcissus kofta"[5]), where hard-boiled eggs are encased in a layer of spicy kofta meat.[6] In Bengal, a region of eastern India, koftas are made from prawns, fish, green bananas, cabbage or meat, such as minced goat meat. In Kashmir, mutton is often used in the preparation of koftas, as opposed to beef or lamb.

In Lebanon, kafta is usually prepared by mixing the ground beef with onion, parsley, allspice, black pepper and salt.[7]

In Morocco, kufta may be prepared in a tagine.

In Israel, they are usually made of beef, chicken, lamb or a mixture of chicken and beef with allspice, parsley, mint, onion, black pepper and salt and are fried in olive oil or cooked in tomato or pomegranate stews. Israeli fish kufta is made of minced fish, coriander, dried peppers (bell peppers and chili peppers), onion, black pepper and salt and is usually cooked in a tomato stew with chickpeas or white beans.

In Pakistan, kofta is made from ground beef with onion, spices and salt. Nargisi kofta with hard boiled egg encased in spicy kofta are also popular.

In Greece and Cyprus, kofta is usually fried and eaten with tzatziki or yogurt.

In Albania and other Balkan countries, kofta is usually made from pork, beef or veal, or a mixture of the three. They are usually served with meze or tarator. They are very popular all around Albania and there are many small shops called Qofteri, which offer qofte and serve beer.

In Romania, there is a local variety of kofta, known as chiftele or chiftea. Chiftele is the Romanian version of Turkish köfte. They are usually made from minced pork, mixed with mashed potatoes and spices, then deep-fried. They are served with pilaf or mashed potatoes.

The origin of the word kofta comes from Classical Persian kōfta (کوفته), meaning "rissole", from the verb kōftan (کوفتن), meaning "to beat" or "to grind", hence grinding the meat of the meatball.[8]

The dictionary definition of kofta at Wiktionary