Kōchi (高知市, Kōchi-shi?) is the capital city of Kōchi Prefecture located on the island of Shikoku in Japan. 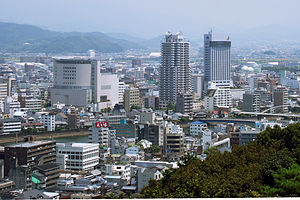 The area of Kōchi has three distinct geographic sections. The major settled part of the city lies at the head of Urado Bay, in a narrow alluvial plain crossed by several rivers, notably the Kagami River and Kokubu River. The plain is bounded by mountains to the north and a range of hills to the south and west.

The northern mountains form the least densely populated part of the city, with the only settlement being along narrow river valleys. The highest point in Kōchi is Kuishi-yama at 1,176 metres (3,858 ft).

To the south of the city centre, Urado Bay cuts through the hills to its outlet into the Pacific Ocean. The land surrounding the bay and a small strip of the coastline form the third part of the city. This area, although hillier and less dense than the plain, is nevertheless a major location of housing and port-related industry.

Kōchi has a very wet humid subtropical climate (Köppen climate classification Cfa), receiving twice as much rainfall as Shikoku’s other chief cities Matsuyama and Takamatsu. It is also the most typhoon-prone of Japan’s major cities owing to its location directly exposed to the open Pacific Ocean from which the storms enter the country, and has twice received over 50 cm (20 in) of rainfall in a day from a typhoon. 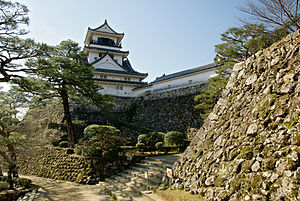 The river plain now containing the city centre was originally settled as a castle town around the seat of the lords of Tosa Province, Kōchi Castle. The castle site was chosen by Lord Yamauchi Kazutoyo in 1601. The city takes its name from that of the castle. As the centre of administration for the province, and the prefecture which succeeded it, the town rapidly grew to become the largest settlement of the region.

During the time of the Meiji Restoration, Kōchi became famous as a centre of pro-imperial ideology, and later for incubating democratic and human rights movements.

On April 1, 1998, the city was designated as the first core city on Shikoku.

On January 1, 2005, the villages of Kagami and Tosayama, both from Tosa District were merged into Kōchi.

On January 1, 2008, the town of Haruno (from Agawa District) was also merged into Kōchi.

Kōchi was selected as a target by the United States' XXI Bomber Command because of the city's status as a prefectural capital, and the fact that it was a center for industry and commercial trade. On July 3, 1945 at 6:22 PM (JST) 129 Aircraft took off to bomb Kōchi. 1060 tons of incendiary bombs were dropped on Kōchi, destroying 48% of the built up areas of the city.[3]

The administrative functions of the city of Kōchi are directed by an elected mayor and 42-member assembly. The current mayor (since 2003) is Seiya Okazaki.

Kōchi is home to two universities, Kōchi University and University of Kōchi, and four junior colleges. The city directly administers Kōchi Commercial High School, and 15 other high schools are located within the city boundaries.

Kōchi's most famous festival is the Yosakoi which is held in August. Teams of dancers dance to traditional and modern songs at various places around Kōchi. The total number of dancers is in the thousands. 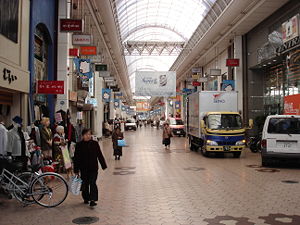 Kōchi Castle still exists in its pre-restoration form, and is one of the main tourist attractions. Other places of interest in the city centre are the Obiyamachi (帯屋町?) shopping arcade, the regular Sunday street markets which are close to a kilometre in length, and Harimaya-bashi (はりまや橋?), a bridge that featured in a famous Kōchi song about the forbidden love of a Buddhist priest.

The mountain Godaisan (五台山?) holds a public park with views of the city, and is home to stop 31 on the Shikoku Pilgrimage, Chikurin-ji, as well as the Makino Botanical Garden. Temples 30 (Zenrakuji) and 33 (Sekkeiji) are also in the city. The Shinto Shrine Tosa jinja is located to the west.[4] 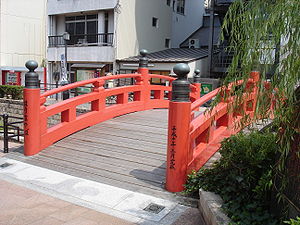 Off Museum Road (Kenritsu Bijutsukandori) is the The Museum of Art, Kōchi, where the main collection is composed of expressionistic works related to Kōchi.[5] The Former Yamauchi Residence and Tosa Yamauchi Family Treasury and Archives are also to be found in the city.

At the mouth of Urado Bay, the remnants of Urado Castle (an earlier provincial seat) stand above Katsurahama (桂浜?), a famous beach with an aquarium and statue of the Kōchi hero Sakamoto Ryōma. Nearby on the grounds is the Sakamoto Ryōma Memorial Museum.[6]

The most visible form of transport within Kōchi is the tram service run by Tosaden Kōtsū. Its three lines with historic cars service the major north-south and east-west axes of the city.

The city also has an extensive bus network.

Kōchi is located on the JR Shikoku's Dosan Line connecting it to northern Shikoku, and via interchanges with the Tosa Kuroshio Railway to the eastern and western parts of Kōchi Prefecture. JR's central station in Kōchi is Kōchi Station.

Kōchi is also serviced by the Kōchi interchange of the Kōchi Expressway which connects to the national expressway system.