Kōchi Prefecture (高知県, Kōchi-ken?) is a prefecture of Japan located on the south coast of Shikoku.[1] The capital is the city of Kōchi.[2]

Prior to the Meiji Restoration, Kōchi was known as Tosa Province and was controlled by the Chosokabe clan in the Sengoku period and the Yamauchi family during the Edo period.[3]

Kōchi Prefecture comprises the southwestern part of the island of Shikoku, facing the Pacific Ocean. It is bordered by Ehime to the north-west and Tokushima to the north-east. It is the largest but least populous of Shikoku's four prefectures. Most of the province is mountainous, and in only a few areas such as around Kōchi and Nakamura is there a coastal plain. Kōchi is famous for its many rivers. Inamura-yama in Tosa-cho is the highest peak in Kochi prefecture with an altitude of 1,506 meters above sea level.

As of April 1, 2012, 7% of the total land area of the prefecture was designated as Natural Parks, namely the Ashizuri-Uwakai National Park; Ishizuchi, Muroto-Anan Kaigan, and Tsurugisan Quasi-National Parks; and eighteen Prefectural Natural Parks.[4] 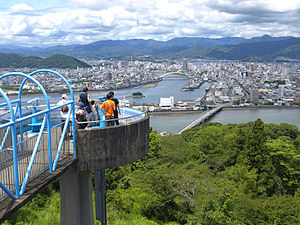 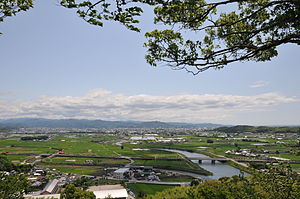 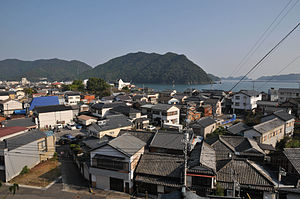 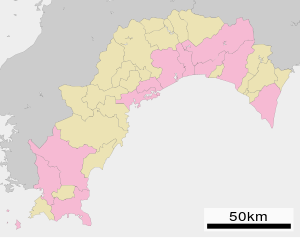 The sports teams listed below are based in Kōchi.

Like most areas of Japan, Kochi advertises itself as specialising in a major food item, in this case, Katsuo no Tataki. Katsuo no Tataki is Skipjack Tuna or Bonito, lightly seared. Traditionally this is done over the straw generated as a by-product of the rice harvest.