This article is about Kadesh in the South of Israel, for other uses see Qadesh (disambiguation). 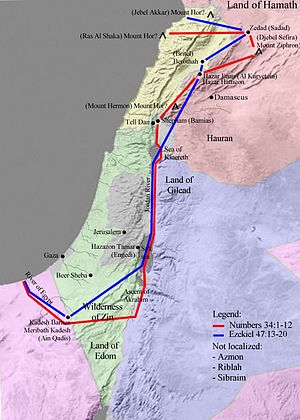 Kadesh or Qadhesh in Classical (Hebrew: קָדֵשׁ‎), also known as Qadesh-Barneaʿ (קָדֵשׁ בַּרְנֵעַ),[1] is a location mentioned in the Hebrew Bible where a number of historical events took place. Kadesh was an important site in Israelite history. It was the chief site of encampment for the Israelites during their wandering in the wilderness of Zin (Deuteronomy 1:46); it was from Kadesh that the Israelite spies were sent out into Canaan (Numbers 13:1-26); The first failed attempt to take the land was made from Kadesh (Num. 14:40-45); Moses disobediently struck the rock that brought forth water at this location (Num. 20:11); Miriam (Numbers 20:1) and Aaron (Numbers 20:22-29) both died and were buried nearby; and Moses sent envoys to the King of Edom from Kadesh (Num. 20:14), asking for permission to let the Israelites pass through his terrain. The Edomite king denied this request.

Kadesh-Barnea is also a key feature in the common biblical formula delineating the southern border of Israel (cf. Num. 34:4, Josh. 15:3, Ezek. 47:19 et al.)[2] and thus its identification is key to understanding both the ideal and geopolitically realized borders of ancient Israel.

There is a moshav in the Negev desert of modern-day Israel with the name Kadesh Barne'a, also called Nitzanei Sinai.

The problem with these references and with most analysis of Kadesh is that there are two distinct cities called Kadesh. The first was Kadesh Barnea, located in the south in the wilderness of Zin, and the second was located in the east in the wilderness of Paran. It was in the second city that Miriam died, and this place was renamed Kadesh because it was a holy place for the rock where water came out, and because it was the burial ground for the entire people of Israel when they lived for 38 years on the west side of the Jordan before going up through Moab and Edom and then across the Jordan into Israel.

This is further in the west: Kadesh number 2.

This is Kadesh Barnea, in the south.

This is discussing the original Kadesh that the Hebrews came to after leaving Egypt and where the spies went into Canaan to check out the land. It is also where after God gets upset and tells the Hebrews they will wander in the wilderness for 38 more years that they decide the next day to agree with God and entire Israel on their own and are slaughtered by the Amalekites and the Canaanites without the help of God and Moses.

Kadesh-Barnea is an oasis south of Canaan, west of Arabah and east of the Brook of Egypt.[3] It is 11 days march by way of Mt. Seir from Horeb (Deut 1:2).

As many as eighteen sites have been proposed as the identification of biblical Kadesh.[4] Part of the confusion may arise from the fact that Kadesh is sometimes mentioned in connection with the Desert of Paran (Num. 13:26) and at other times in connection with the Zin Desert (Num. 20:1).[5] This discrepancy has been noted since the time of the medieval commentators, leading some (e.g. Hezekiah bar Manoah) to seek a reconciliatory model, while others (Abraham ibn Ezra and Nahmanides) have proposed two separate sites being identified as Kadesh.

A minority of modern scholarship has maintained that there were two sites identified as Kadesh[6]—western Kadesh (in the wilderness of Zin) and eastern Kadesh (often associated with Petra, Jordan in the wilderness of Paran). This view seems to be represented by Josephus [7] and Eusebius of Caesarea.[8] Josephus says he recognizes exactly where Miriam is buried and it is by the rock, but he refers to the rock (selah in Hebrew) while writing for the Romans in the lingua franca at the time, which was Greek, and the word for rock in Greek is "petra". The Nabataeans came to Petra in about 400 B.C. knowing it to be an ancient burial ground of caves, and buried their dead on top of the graves used 100 years earlier by the Hebrews.

However, since 1905 modern Ain el-Qudeirat in the Wadi el-Ain of the northern Sinai has been widely accepted as the location of biblical Kadesh Barnea. Several Iron Age fortresses have been excavated there. The oldest, a small, elliptical structure dates to the tenth century BC, but was evidently abandoned for some time after the first fort's destruction. A second fort constructed during the eighth century BC (probably during the reign of Uzziah) was destroyed during the seventh century BC, most likely during Manasseh's reign. Two ostraca engraved in Hebrew have been recovered there, suggesting the Israelites did indeed occupy this site.[9] However, these Kadesh-Barnea ostraca are dated to the 8th or 7th century B.C.E. and therefore are hundreds of years too recent to be associated with the biblical Exodus.[10]

Excavations at Kadesh conducted by Dr. Rudolph Cohen (former head of the Israeli Antiquities Authority) during the Israeli occupation of Sinai following the 1967 war uncovered copious remains of the Middle Bronze I period (sometimes known as Intermediate Bronze Age), which were also found at numerous other sites in the Negev. On the other hand, Late Bronze Age, the conventional time of the Exodus, is unattested in the Negev. In an article in Biblical Archaeology Review of July, 1983, Cohen put forward the suggestion that the Exodus took place at the start of MBI and that the MBI people were, in fact, the Israelites. The idea, fully accepted by those who have worked at sites such as Ein Hatzeva, has not been widely adopted.