From Infogalactic: the planetary knowledge core
Jump to: navigation, search
This article is about the city. For the olive, see Kalamata olive.

Kalamata (Greek: Καλαμάτα Kalamáta) is the second most populous city of the Peloponnese peninsula in southern Greece and the largest city of the homonymous administrative region. The capital and chief port of the Messenia regional unit, it lies along the Nedon River at the head of the Messenian Gulf.

The municipality Kalamata was formed at the 2011 local government reform by the merger of the following 4 former municipalities, that became municipal units:[3]

The municipal unit of Kalamata is subdivided into the following communities (population according to the 2011 census and settlements within the district in brackets):

The province of Kalamata (Greek: Επαρχία Καλαμών) was one of the provinces of the Messenia Prefecture. Its territory corresponded with that of the current municipalities Kalamata and West Mani.[4] It was abolished in 2006. 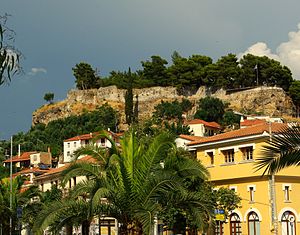 View of the Kalamata Castle

The history of Kalamata begins with Homer, who mentions Pharai (Φηραί), an ancient city built more or less where the Kalamata Castle stands today. It was believed that during ancient times the area that the city presently occupies was covered by the sea, but the proto-Greek and archaic period remains (Poseidon temple) that were unearthed at Akovitika region prove the opposite. 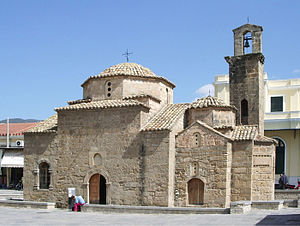 The Byzantine-era Church of the Holy Apostles. This was the church where the captains of the Greek revolution swore to free Greece from the Ottomans.

Pharai was rather unimportant in Antiquity, and the site continued in obscurity until middle Byzantine times. Kalamata is first mentioned in the 10th-century Life of St. Nikon the Metanoeite, and experienced a period of prosperity in the 11th–12th centuries, as attested by the five surviving churches built in this period, including the Church of the Holy Apostles, as well as the comments of the Arab geographer al-Idrisi, who calls it a "large and populous" town.[5]

Following the Fourth Crusade, Kalamata was conquered by Frankish Crusaders under William of Champlitte and Geoffrey of Villehardouin in 1205, when its Byzantine fortress was apparently in so bad a state that it could not be defended against them. Thus the town became part of the new Principality of Achaea, and after Champlitte granted its possession to Geoffrey of Villehardouin, the town was the heart of the Villehardouins' patrimony in the Principality; Prince William II of Villehardouin was born and died there.[5][6] After William II's death in 1278, Kalamata remained in the hands of his widow, Anna Komnene Doukaina, but when she remarried to Nicholas II of Saint Omer, King Charles of Anjou was loath to see this important castle in the hands of a vassal, and in 1282 Anna exchanged it with lands elsewhere in Messenia.[6]

In 1292 or 1293, two local Slavic magnates managed to capture the fortress of Kalamata by a ruse and, aided by 600 of their fellow villagers, took over the entire lower town as well in the name of the Byzantine emperor, Andronikos II Palaiologos. Constable John Chauderon in vain tried to secure their surrender, and was sent to Constantinople, where Andronikos agreed to hand the town over, but then immediately ordered his governor in Mystras not to do so. In the event, the town was recovered by the Franks through the intercession of a local Greek, a certain Sgouromalles.[6] In 1298, the town formed the dowry of Princess Matilda of Hainaut upon her marriage to Guy II de la Roche. Matilda retained Kalamata as her fief until 1322, when she was dispossessed and the territory reverted to the princely domain.[6] In 1358, Prince Robert gifted the châtellenie of Kalamata (comprising also Port-de-Jonc and Mani) to his wife, Marie de Bourbon, who kept it until her death in 1377.[6] The town remained one of the largest in the Morea—a 1391 document places it, with 300 hearths, on par with Glarentza—but it nevertheless declined in importance throughout the 14th and 15th centuries in favour of other nearby sites like Androusa. Kalamata remained in Frankish hands until near the end of the Principality of Achaea, coming under the control of the Byzantine Despotate of the Morea only in 1428.[6]

Ottoman period and War of Independence 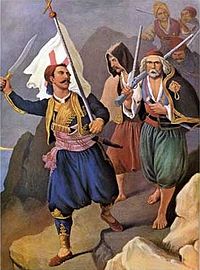 Kalamata was occupied by the Ottomans from 1481 to 1685, like the rest of Greece. In 1659, during the long war between Ottomans and Venetians over Crete, the Venetian commander Francesco Morosini, came into contact with the rebellious Maniots, for a joint campaign in the Morea, in the course of which he took Kalamata. He was soon after forced to return to Crete, but the Venetians returned in the Morean War.

The Venetian Republic ruled Klamata from 1685 as part of the "Kingdom of the Morea" (Italian: Regno di Morea). During the Venetian occupation the city was fortified, developed and thrived economically. However, the Ottomans reoccupied Kalamata in the war of 1715 and controlled it until the Greek War of Independence.

Kalamata was the first city to be liberated as the Greeks rose in the Greek War of Independence. On 23 March 1821, it was taken over by the Greek revolutionary forces under the command of generals Theodoros Kolokotronis, Petros Mavromichalis and Papaflessas. However, in 1825, the invading Ibrahim Pasha destroyed the city. 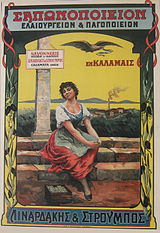 During World War II on 29 April 1941, a battle was fought near the port between the invading German forces and the 2nd New Zealand Division, for which Jack Hinton was later awarded the Victoria Cross.

After World War II, and due to political issues, Kalamata, as well as most of the Peloponnese, was excluded from the government development plans in favour of north Greece. That was a major brake on the local economy, resulting in the decline of the port and hence the city. During the 1970s and 1980s, development and growth in Kalamata were unknown.

Kalamata was again in the news on 13 September 1986, with an earthquake that measured 6.2 on the surface wave magnitude scale. It was described as "moderately strong" and caused heavy damage and killed 20 people.[7] Following this severe damage, the local authorities and individuals strained their financial resources to bring a wind of change to the forgotten capital of Messinia.

Due to these efforts, Kalamata has now fully recovered and developed into a modern provincial capital. Today, Kalamata has the second largest population and mercantile activity in Peloponnese. It makes important exports, particularly of local products such as raisins, olives and olive oil. It is also the seat of the Metropolitan Bishop of Messenia. The current Metropolitan Bishop is Chrysostomus III, since 15 March 2007. 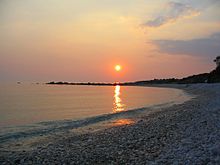 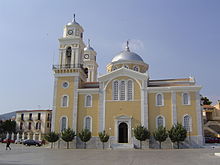 The church of Ypapandi at the center of the city

There are numerous historical and cultural sights in Kalamata, such as the Villehardouin castle, the Ypapandi Byzantine church, the Kalograion monastery with its silk-weaving workshop where the Kalamata scarves are made, and the municipal railway park. The Church of the Holy Apostles is where Mavromichalis declared the revolt against Ottoman rule in 1821. Art collections are housed at the Municipal Gallery, the Archaeological Museum of Messenia and the Folk Art Museum.

Kalamata’s cathedral of the Ypapandi (Presentation of the Lord to the Temple) nestles beneath the 14th-century Frankish castle. The foundation stone was laid on January 25, 1860, and the building was consecrated on August 19, 1873. It suffered great damage during the 1986 earthquake, but was subsequently restored. The Festival of the Ypapandi (27 January - 09.02) is of national importance for the Greek Orthodox world and, locally, the occasion for a holiday (02.02). The litany of the miraculous icon was first introduced in 1889 and takes place every year on February 2, no matter the weather.

In late January 2010 the city hosted the Ecumenical Patriarch Bartholomew to celebrate the 150th anniversary of the cathedral. He was offered the golden key of the city. The region around Kalamata has provided two Ecumenical patriarchs in the past.

Kalamata has a Mediterranean Climate (Csa) with mild, and wet winters and dry, hot summers. Kalamata receives plenty of precipitation days in winter. Summers are very hot and dry. The maximum temperature ever recorded at Kalamata is 45,6 °C and the minimum ever recorded is -5 °C. 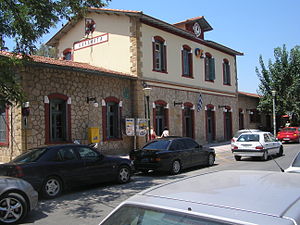 Kalamata is accessed by GR-7/E55/E65 in the west and GR-82 runs through Kalamata and into the Taygetus. The motorway to Kalamata from Tripoli is almost complete, with just one 30 km section between Paradisia and Allagi still to be opened in 2013.

Kalamata is served by a metre gauge railway line of the former Piraeus, Athens and Peloponnese Railways, now owned by the Hellenic Railways Organisation (OSE). There is a station and a small freight yard in the city, as well as a rolling stock maintenance depot to the north. There used to be a mainline train service to Kyparissia, Pyrgos and Patras, and a suburban service to Messini and the General Hospital. However, in December 2010 all train services from Kalamata, along with those in the rest of the Peloponnese south of Corinth, were discontinued on economic grounds, and the train station is now closed. A previously disused extension line to the port is now a Railway Park, with old steam engines on display and a cafe in the old station building.

There is a bus link (KTEL) to Tripoli, Corinth and Athens with frequent services. Ferries are available to places such as the Greek islands of Kythira and Crete in the summer months. Also in the summer months, charter and scheduled flights fly direct to Kalamata International Airport from some European cities. A scheduled service by Aegean Air once a day linking Kalamata and Athens International Airport commenced in 2010. 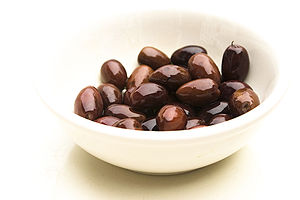 Kalamata hosts a lot of notable sport clubs with earlier presence in the higher national divisions in Greek football. It also hosts one of the oldest Greek club, the club Messiniakos FC founded in 1888.

Kalamata is twinned with