William Pitt Kalanimoku (c. 1768–1827) was a High Chief who functioned similar to a prime minister of the Hawaiian Kingdom during the reigns of Kamehameha I, Kamehameha II and the beginning of the reign of Kamehameha III. He was called The Iron Cable of Hawaiʻi because of his abilities.[1]:2

At the time, his name was often spelled Karaimoku by Hawaiians and contemporaries alike, and even Kalanimoku, himself, signed his name as such.[3] Other spellings were Kalaimoku, Crymoku or Crimoku. He adopted the name William Pitt after his contemporary the Prime Minister of Great Britain, William Pitt the Younger. He was frequently addressed as Mr. Pitt or Billy Bitt. He served as Kamehameha I's chief minister and treasurer succeeding his uncle Keʻeaumoku Pāpaʻiahiahi. He had great natural abilities in both governmental and business affairs. He was well liked and respected by foreigners, who learned from experience to rely on his words. He was called "the iron cable of Hawaiʻi" because of his abilities.[4][5] 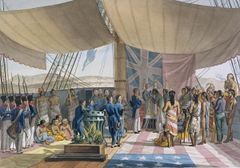 In 1819, he was baptized a Roman Catholic aboard the French ship Uranie, in the presence of Kuhina Nui (Premier) Kaʻahumanu and King Kamehameha II.[5]:38 The event depicted in a watercolor by ship's artist Jacques Arago (1790—1855), who wrote and illustrated accounts of the Hawaiian Islands during Freycinet expedition.[1]:12

Kalanimoku led an army against the revolt of Kekuaokalani in December 1819 in the successful battle of Kuamoʻo.[6]

In his later years his vision dimmed and one of his eyes was defective. He suffered from dropsy through 1826 and the disease became alarming in the following year. He died at Kamakahonu (the old home of Kamehameha I) in Kailua Kona, Hawaii Island on February 7, 1827. He had only one son, William Pitt Leleiohoku I, who married Ruth Keʻelikōlani and had their only son John William Pitt Kīnaʻu, who died while still a teenager.