From Infogalactic: the planetary knowledge core
Jump to: navigation, search
For other uses, see Kalyug (disambiguation).
Not to be confused with Kālī.

Not to be confused with Kali Yug, a 1963 Italian film

Kali Yuga (Devanāgarī: कलियुग [kəli juɡə], lit. "age of [the demon] Kali", or "age of vice") is the last of the four stages the world goes through as part of the cycle of yugas described in the Sanskrit scriptures, within the present Mahayuga. The other ages are called Satya Yuga, Treta Yuga, and Dvapara Yuga.

Kali Yuga is associated with the apocalyptic demon Kali (who is not to be confused with the goddess Kālī (काली). The "Kali" of Kali Yuga means "strife", "discord", "quarrel" or "contention".

The duration and chronological starting point in human history of Kali Yuga has given rise to different evaluations and interpretations. According to the Surya Siddhanta, Kali Yuga began at midnight (00:00) on 18 February 3102 BCE.[1]

There is considerable controversy over the date for the start of the Kali Yuga and its duration. The extremely rare alignment of the Sun, the Moon, the Earth and the four other human-visible planets of the Solar System, that is considered to be the starting point of the Kali Yuga, is depicted in the Mohenjo-Daro seals. These seals are possibly the oldest existing Astronomical observations even according to conventional scholars. Going by this alignment the year 3102 B.C is slightly off. The actual date for this alignment is February 7 of 3104 B.C. There is also sufficient proof to believe that Vrdhha Garga knew of precession at least by 500 B.C. Garga had calculated the rate of precession to within 30% of what the modern scholars estimate.[3][4]

Most interpreters of vedic scriptures, as Bhaktisiddhanta Sarasvati Goswami and his recent disciple Bhaktivedanta Swami Prabhupada believe that Earth is currently in Kali Yuga and lasts 432 000 years. Other authors, such as Swami Sri Yukteswar[5] and Paramhansa Yogananda,[6] believe that it is now an ascending Dvapara Yuga, indicating levels of cycles within each major Yuga period as each being a development, the smaller cycles within cycles eventually leading to full development of the qualities of the ages. The Kali Yuga is commonly thought to last 6480 years although other durations have been proposed.[7]

Hindus believe that human civilization degenerates spiritually during the Kali Yuga,[8] which is referred to as the Dark Age because in it people are as far away as possible from God. Hinduism often symbolically represents morality (dharma) as a bull. In Satya Yuga, the first stage of development, the bull has four legs, but in each age morality is reduced by one quarter. By the age of Kali, morality is reduced to only a quarter of that of the golden age, so that the bull of Dharma has only one leg.[9][10]

References in the Mahabharata

The Mahabharata War and the decimation of Yadavas thus happened at the Yuga-Sandhi, the point of transition from one yuga to another. The scriptures mention Sage Narada to have momentarily intercepted the demon Kali on his way to the Earth when Duryodhana was about to be born in order to make him an embodiment of 'arishadvargas' and adharma in preparation of the era of decay in values and the consequent havoc.

Prophesied events during a Kali Yuga

A discourse by Markandeya in the Mahabharata identifies some of the attributes of Kali Yuga. In relation to rulers, it lists:

With regard to human relationships, Markandeya's discourse says:

The Brahma Vaivarta Purana (related to Rathantara kalpa) mentions a ten thousand-year period, starting from the traditional dating of the Kali Yuga epoch, during which bhakti yogis will be present.[11] Lord Krishna foretold that Kali Yuga will be full of extreme hardships for people with ideals and values.

In the Brahma-vaivarta Purana has words spoken by Lord Krishna to Mother Ganga just before the beginning of Kali yuga (the age of quarrel and strife). Kali yuga began approximately five thousand years ago, and it has a duration of 432,000 years, leaving us with 427,000 years till the end of the present age. Within this 432,000 year period, there is a period of 10,000 years that will be a golden age. That golden age is being described below by Lord Sri Krishna. Predicted in Brahma-vaivarta Purana 4.129. The fourth part of the Brahma-vaivarta is called Kṛṣṇa-janma-khanda. Chapter 129 is called Golokarohanam, because it describes how Krishna returns to His abode. This specific dialogue is between Lord Krishna and Mother Ganga. Verse 49 is a question by Ganga, verses 50–60 are Lord Sri Krishna's answer.

This text is taken from the Brahma-vaivarta Purana [14]

"For 10,000 years of Kali such devotees of Mine will be present on earth. After the departure of My devotees there will be only one varna, Outcaste."

"(Sri Krisna said:) Lord Hari will stay on this earth for the first ten-thousand years of Kali-yuga. Till then gods will be worshipped and the Puranas and scriptures will also be present."

The great Vaishnava Saint Chaitanya Mahaprabhu exhorted, "Krishna Nama Sankirtan" i.e. the constant chanting of the Lord's name is the supreme healer in this age. It destroys sins and purifies the hearts through Bhakti ensures universal peace. 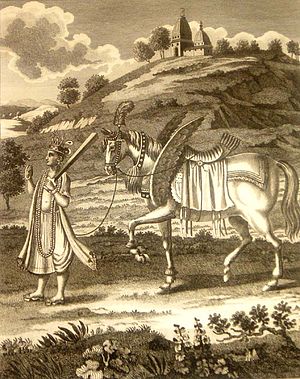 Kali is the reigning lord of Kali Yuga and his nemesis is Sri Kalki, the tenth and final Avatar of Lord Vishnu. According to the Vishnu Purana, Kali is a negative manifestation working towards the cause of 'the end' or rather towards eventual rejuvenation of the universe.[12] Kali also serves as an antagonistic force in the Kalki Purana. It is said that towards the end of this yuga, Kalki will return riding on a white horse to do battle with Kali and his dark forces. The world will suffer a fiery end that will destroy all evil, and a new age (the next Satya Yuga of the following Mahayuga), will begin.

In Sikhism, Kali Yuga is metaphorically used to describe the state of the world as was commonly understood in the 16th century. It is stressed that one should meditate as much as possible to reach the state of Nirvana and be liberated or be one with God. Guru Granth Sahib Ji on Ang:1185 says:

Now, the Dark Age of Kali Yuga has come.

Plant the Naam, the Name of the One Lord.

It is not the season to plant other seeds.

Do not wander lost in doubt and delusion.[13]

The dictionary definition of Kali Yuga at Wiktionary