Kallstadt (German pronunciation: [ˈkalʃtat]) is an Ortsgemeinde in the Bad Dürkheim district in Rhineland-Palatinate, Germany.

Kallstadt lies on the German Wine Route. It is part of the Verbandsgemeinde of Freinsheim, whose seat is in the like-named town.

The area where Kallstadt now stands lay on the Roman road that linked Altenstadt – now in Alsace and a constituent community of Wissembourg – with the Rhineland and even in Roman times its cultural landscape was blossoming. Many archaeological finds witness settlement by merchants, former legionnaires and also winegrowers from about 79 BC to at least AD 383. The settlement that stands today could well have had its beginnings when the land here was settled by a Frankish clan that arose about 500 and whose chief, Chagilo, became the village’s namesake.

In 824, Kallstadt had its first documentary mention as Cagelenstat. Originally an Imperial Village, it later passed to the County of Pfeffingen (Homburg) and beginning in 1321 was held in fief first by the Knights Monfort, and then from 1451 until about 1551 by the House of Blicken von Lichtenberg. Thereafter, Kallstadt belonged, until 1794, as an Electoral Palatinate fief, to the Leiningens’ holdings.

In the regional dialect, the locals of Kallstadt are "affectionately" known as Brulljesmacher (braggart).[2]

The council is made up of 16 council members, who were elected at the municipal election held on 7 June 2009, and the honorary mayor as chairman.

The municipal election held on 7 June 2009 yielded the following results:[3]

The municipality’s arms might in English heraldic language be described thus: Per fess embattled, azure an eagle displayed argent armed and langued gules, and Or masoned an orb of the third banded of the field and ensigned with a cross fleuretty of the third, this last between two arrowslits of the first.

Kallstadt’s oldest known seal dates from 1494 and bears as charges both the Palatine Lion and the Bavarian bendy lozengy pattern (slanted diamond shapes alternating in tincture between argent and azure, that is, silver and blue) accompanied by a small letter K in base. In 1506, something similar to the current arms appeared when another seal showed an eagle above a wall. This reflected the village’s incorporation into the Leiningen holdings. A similar composition prevailed until 1711 when a seal charged simply with a globus cruciger appeared. This stood for the Counts Palatine, possibly putting its origin before 1506. On 15 January 1845, a coat of arms that might be described as “Azure an orb ensigned with a cross Or”, that is, a blue escutcheon bearing a golden globus cruciger with a cross on top, was granted as the municipality’s arms. On 22 June 1962, however, the current arms combining the charges of these last arms and the 1506 seal were granted.[4] 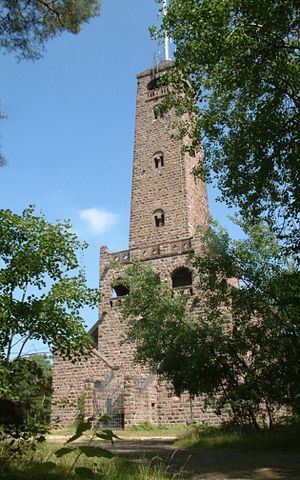