From Infogalactic: the planetary knowledge core
Jump to: navigation, search
For the town in Armenia, see Noyakert. For the town in Slovakia, see Kalša. For the group of Sikhs, see Khalsa.
File:Palermo-Santa-Maria-dello-Spasimo-bjs2007-01.jpg
Chiesa di Santa Maria dello Spasimo in Kalsa

Kalsa or Mandamento Tribunali is a historical quarter of the Italian city of Palermo in Sicily.

Al-Khalisa was centre of the city of Balarm (Palermo) conquered by the Normans during a battle against Arab forces early in 1072. The other district, Al-Kasr (today the Cassaro), took its name from the castle that stood there, though there were several fortified buildings in Al-Khalisa too.

Ibn Jubair visited the area in the end of the 12th century and described (Al-Kasr and Al-Khalisa in Balharm). "The capital is endowed with two gifts, splendor and wealth. It contains all the real and imagined beauty that anyone could wish. Splendor and grace adorn the piazzas and the countryside; the streets and highways are wide, and the eye is dazzled by the beauty of its situation. It is a city full of marvels, with buildings similar to those of Cordoba, built of limestone. A permanent stream of water from four springs runs through the city. There are so many mosques that they are impossible to count. Most of them also serve as schools. The eye is dazzled by all this splendor."

In ancient times, much of what would later become Al-Khalisa was underwater. Stories abound of Hamilcar and Hannibal docking their ships at the Cala (Kala) bay, the ancient city's port, in preparation for attacks on the Greek city of Himera (near Termini Imerese) eastward along the coast. The walls of the Phoenicians' and Carthaginians' older Punic city extended to what was once the confluence of the Papyrus and Kemonia rivers where Al-Khalisa begins (today roughly the intersection of Via Roma and Via Vittorio Emanuele). The centre of Al-Khalisa was located near what is now Piazza Kalsa, though much of the square's present "Arabesque" ambience, such as the "Greek Gate," is due to sixteenth-century revival movements based on Spanish Moorish themes rather than anything we can trace directly to the emirate of Bal'harm. Nevertheless, Al-Khalisa was known for its narrow, winding streets, and some of the existing ones clearly follow eleventh-century patterns. This is one of the features that gives much of Old Palermo its distinctly Arab atmosphere, though this has to do with much more than architecture. 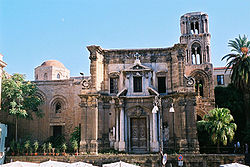 The façade of la Martorana in Kalsa

On summer evenings, Kals'art, an arts festival, is held in the streets of Kalsa.