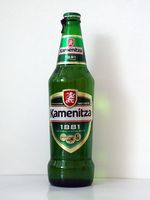 Kamenitza (Bulgarian: Каменица) is one of the top-selling Bulgarian beer companies,[citation needed] based in the city of Plovdiv. Established in 1881 and owned by Molson Coors, the brewery has a wide variety of lager and dark beers. Its slogan is "Muzete znayat zashto" which translates to "Men know why."

Kamenitza had an 18% share of the Bulgarian beer market in 2005[1][citation needed] according to data from ACNielsen. The company is a sponsor of the Bulgaria national football team.

In 1881 three Swiss entrepreneurs built a brewery in Plovdiv on a hill called Kamenitza and used the name as their brand. The drink of choice for most Bulgarians at the time was lager, but Kamenitza broke new ground by producing the first dark beer for the market. By the 1890s they won awards at international exhibitions, including Brussels and Chicago.[vague][3][citation needed]

The communist regime nationalised Kamenitza: first, in 1947, as part of the state-owned Alcoholic Beverages, then in 1952 as part of Vinprom.[citation needed]

The Belgian multinational company InBev bought the Bulgarian breweries Kamenitza, Astika and Burgasko Pivo in 1995 and added Plevensko Pivo in 1997. During 1997 to 2005, InBev invested 86.3 million leva in Bulgaria, and in 2005 Kamenitza sold 800,000 hectoliters, making it the best-selling domestic beer.[1][citation needed]

Since the early 2010s, Kamenitza bottles have pull-off caps.