The Kanawha River (/kəˈnɔː/ kə-NAW or /kəˈnɔːə/ kə-NAW-ə) is a tributary of the Ohio River, approximately 97 mi (156 km) long, in the U.S. state of West Virginia. The largest inland waterway in West Virginia, it has formed a significant industrial region of the state since the middle of the 19th century.

It is formed at the town of Gauley Bridge in northwestern Fayette County, approximately 35 mi (56 km) SE of Charleston, by the confluence of the New and Gauley rivers. It flows generally northwest, in a winding course on the unglaciated Allegheny Plateau, through Fayette, Kanawha, Putnam, and Mason counties, past the cities of Charleston and St. Albans, and numerous smaller communities. It joins the Ohio at Point Pleasant.

Paleo-Indians, the earliest indigenous peoples, lived in the valley and the heights by 10,000 BC as evidenced by archaeological artifacts such as Clovis points. A succession of prehistoric cultures developed, with the Adena culture beginning the construction of numerous skilled earthwork mounds and enclosures more than 2000 years ago. Some of the villages of the Fort Ancient culture survived into the times of European contact.

The area was a place of competition among historical American Indian nations. Invading from their base in present-day New York, the Iroquois drove out or conquered Fort Ancient culture peoples, as well as such tribes as the Huron and Conoy. By right of conquest, the Iroquois, Lenape (Delaware), and Shawnee reserved the area as a hunting ground. They resisted European-American settlement during the colonial years.

The river valley contains significant deposits of coal and natural gas. In colonial times, the wildly fluctuating level of the river prevented its use for transportation. The removal of boulders and snags on the lower river in the 1840s allowed navigation, which was extended upriver after the construction of locks and dams starting in 1875. The river is now navigable to Deepwater, an unincorporated community about 20 miles (32 km) upriver from Charleston. A thriving chemical industry along its banks provides a significant part of the local economy.

In addition to the New and Gauley River, the Kanawha is joined at Charleston by the Elk River, at St. Albans by the Coal River, and at Poca by the Pocatalico River.

List of cities and towns along the Kanawha River 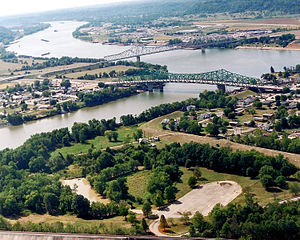 The confluence of the Kanawha and Ohio Rivers at Point Pleasant, West Virginia 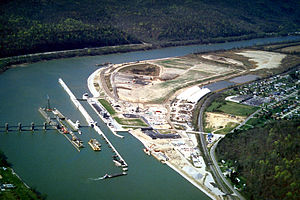 Winfield Lock and Dam on the Kanawha River at Winfield, West Virginia, 31 miles upriver from the mouth at Point Pleasant. Map:[6]

According to the Geographic Names Information System, the Kanawha River has also been known as:

"Ka(ih)nawha" derives from the region's Iroquoian dialects meaning "water way" or "canoe way" implying the metaphor, "transport way", in the local language.[7] The Glottal consonant of the "ih" (stream or river, local Iroquois) dropped out as settlers and homesteaders arrive.[8]

Archaeological artifacts, such as Clovis points and later projectiles, indicate prehistoric indigenous peoples living in the area from the 12,500 BC era. Peoples of later cultures continued to live along the valley and heights. Those of the Adena culture built at least 50 earthwork mounds and 10 enclosures in the area between Charleston and Dunbar, as identified by an 1882 to 1884 survey by the Bureau of Ethnology (later part of the Smithsonian Institution). Three of their mounds survive in the valley, including Criel Mound at present-day South Charleston, West Virginia. Evidence has been found of the Fort Ancient culture peoples, who had villages that survived to the time of European contact, such as Buffalo and Marmet. They were driven out by Iroquois from present-day New York.[9]

According to French missionary reports, by the late 16th century, several thousand Huron, originally of the Great Lakes region, lived in central West Virginia. They were partially exterminated and their remnant driven out in the 17th century by the Iroquois' invading from western present-day New York. Other accounts note that the tribe known as Conois, Conoy, Canawesee, or Kanawha were conquered or driven out by the large Seneca tribe, one of the Iroquois Confederacy, as the Seneca boasted to Virginia colonial officials in 1744. The Iroquois and other tribes, such as the Shawnee and Delaware, maintained central West Virginia as a hunting ground. It was essentially unpopulated when the English and Europeans began to move into the area.[10]

In April 1774, Captain Hanson was one of an expedition: "18th. We surveyed 2,000 acres (8.1 km2) of Land for Col. Washington, bordered by Coal River & the Canawagh..." [11] This area is the lower area of today's St. Albans, West Virginia. After the Treaty of Fort Stanwix, "The Kanawhas had gone from the upper tributaries of the river which bears their name, to join their kinsmen, the Iroquois in New York; the Shawnee had abandoned the Indian Old Fields of the valley of the South Branch of the Potomac; the Delaware were gone from the Monongahela; the Cherokee who claimed all the region between the Great Kanawha and Big Sandy, had never occupied it." quoting Virgil A. Lewis (1887), Corresponding member of the Virginia Historical Society.[12] Virgil's grandfather was a western Virginia surveyor, Andrew Lewis, who surveyed the Kanawha's tributaries in the middle 18th century. The river's name changes to the Kanawha River at the Kanawha Falls. The Treaty of Big Tree between the Seneca nation and the United States established ten reservations. This formal treaty was signed on September 15, 1797.[13] Lewis was granted a large tract of land near the mouth of the Great Kanawha River in the late 18th century.

The Little Kanawha and the Great Kanawha rivers, the two largest in the state, were named for the American Indian tribe that lived in the area prior to European settlement in the 18th century. Under pressure from the Iroquois, most of the Conoy/Kanawha had migrated to present-day Virginia by 1634, where they had settled on the west side of the Chesapeake Bay and below the Potomac River. They were also known to the colonists there as the Piscataway. They later migrated north to Pennsylvania, to submit and seek protection with the Susquehannock and Iroquois. The spelling of the Indian tribe varied at the time, from Conoys to Conois to Kanawha. The latter spelling was used and has gained acceptance over time.[10]