Kanhoji Angré (Marathi: कान्होजी आंग्रे) or Conajee Angria or Sarkhel Angré (Sarkhel is a title equal to Admiral of a Fleet.[1]) (August 1669 – 4 July 1729) was the first notable chief of the Maratha Navy in 18th century India. He fought against the British, Dutch and Portuguese naval interests on the coasts of India during the 18th century. As a result, his European enemies labeled him a pirate. Despite the attempts of the British and Portuguese to subdue Angre, he remained undefeated until his death.[2]

Born in the village of Angarwadi, six miles from Pune in the year of 1669, in a Sankapal Kshatriya family.[3] They were guardians of small state named 'Vir Rana Sank' and therefore became known as Sankapal. His mother's name was Ambabai and his father, Tukoji, served at Suvarnadurg for Shivaji with a command of 200 posts.[3] Little is known about his early life except that he was involved in daring exploits at sea with his father. He spent much of his childhood in the Suvarnadurg Fort, where would later become governor.

He was originally appointed as Surkhel or Darya-Saranga (Admiral) by the chief of Satara in c. 1698.[4][5] Under that authority, he was master of the Western coast of India from Mumbai to Vingoria (now Vengurla) in present-day state of Maharashtra, except for the property of the Muslim Siddis of Murud-Janjira who were affiliated with the powerful Mughal Empire.[6]

Kanhoji started his long history of heroic feats by attacking merchant ships of the British East India Company and slowly gained respect from all the colonial powers. In 1702, he abducted a merchant vessel from Calicut with six English sailors and took it to his harbor.[6] In 1707, he attacked the frigate, Bombay which was blown-up during fight.[6] In time, the British feared as he could take any merchant ship except large European ships.[6] When Maratha Chattrapati Shahu ascended the leadership of the Maratha Empire, he appointed Balaji Viswanath Bhatt as his Senakarta (Commander) and negotiated an agreement with Angre around 1707. This was partly to appease Angre who supported the other ruler, Tarabai, who claimed the Maratha throne. As per agreement, Angre became head of the Maratha navy. He also played a role in the Maratha conflicts against the Mughal Emperor Aurangzeb, who was campaigning in the Deccan.

A painted scroll depicting different types of ships of the Marathan Navy, primarily grabs and gallivats, but also including some captured English ships.

When the Maratha empire was weak, Angre became more and more independent and in 1713, an army was sent headed by Peshwa Bhyroo Pant to control Angre, but Angre won the battle and captured and held Bhyroo Pant as his prisoner.[6] Angre planned to march to Satara where Sahoojee was acting as a head of state and where Angre was requested to appear for negotiations, after which Angre was confirmed as Admiral (Surkhiel) of entire fleet.[6] Angre was also placed as chief of 26 forts and fortified places of Maharashtra.[6]

In 1720, Angre captured the vessel Charlotte along its owner, a merchant named Curgenven who had been bound to China from Surat.[7] Curgenven would be imprisoned for 10 years.[7]

Angre employed Europeans, generally Dutch, to command his best vessels.[6] He also employed a Jamaican and a pirate named James Plantain and entrusted him significant responsibilities such as the chief gunner post.[8] Angre reemployed Manuel de Castro, who was considered as a traitor and punished by the (British) Bombay Council[9] for his failure in capturing Khanderi Island, which was controlled by Kanhoji Angre.[10]

Kanhoji intensified the attacks on colonial naval powers like Great Britain and Portugal on the western coast of India. On 4 November 1712, his navy even succeeded in capturing the armed yacht Algerine of the British President of Mumbai, William Aislabie, killing the chief of their Karwar factory, Thomas Chown, and making his wife a prisoner, not releasing the captured yacht and the lady until 13 February 1713 for a ransom of 30,000 Rupees.[14] He seized EastIndiamen, Somers and Grantham, near Goa as these vessels were on their voyage from England to Bombay.[14] In 1712, he disabled thirty-gun man-of-war which was conveying Portuguese "armado" and captured it.[14]

Angre eventually signed a treaty with the East India Company President Aislabie to stop harassing the Company's fleet. Aislabie would eventually return to England during October 1715.

After the arrival of Charles Boone as the new Governor of Mumbai on 26 December 1715, Boone made several attempts to capture Angre. Instead of succeeding, in 1718 Angre captured three ships belonging to the British leaving them to claim that he a pirate. Angre blockaded the port of Mumbai and extracted a ransom of 8,750 pounds from the East India Company.[citation needed]

The British launched a fresh campaign in 1720, when shells from floating batteries burst in vain against the rocks of Vijaydurg fort. The attempt to land inside the fort ended in disaster, and the British squadron soon retired to Mumbai.

On 29 November 1721 a joint attempt by the Portuguese (Viceroy Francisco José de Sampaio e Castro) and the British (General Robert Cowan) to humble Kanhoji also failed miserably. This fleet consisted of 6,000 soldiers in no less than four of the European's largest Man of war class ships led by Commander Thomas Mathews. Aided by Maratha warriors including Mendhaji Bhatkar and his navy, Angre continued to harass and plunder the European ships. Commander Matthews returned to Great Britain, but was accused and convicted of trading with the pirates in December 1723.[citation needed] Also, during 1723, Governor Boone returned to Great Britain. After Boone's departure, relative calm prevailed between the British and Angre, until Angre's death in 1756. 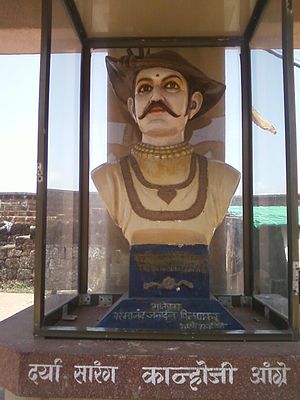 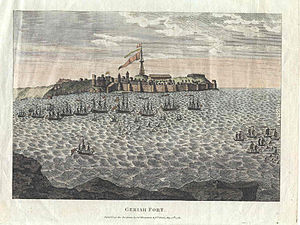 By the time of his death on 4 July 1729, Kanhoji Angre had emerged as a master of the Arabian Sea from Surat to south Konkan. He left behind two legitimate sons, Sekhoji and Sambhaji; three illegitimate sons, Tulaji, Manaji, and Yeshaji. Angre's Samadhi (tomb) is situated at Alibag, Maharashtra.[12]

After Kanhoji, his son Sekhoji continued Maratha exploits at sea till his death in 1733. After Sekhoji's death, Angre's holdings were split between two brothers, Sambhaji and Manaji, because of divisions in the family. With the Marathas neglecting naval concerns, the British soon found it easier to defeat the remnants of the kingdom. Angre and his sons' reign over the Western coast ended with the capture of Tulaji in a joint British / Peshwa attack on the fort of Gheriah (now Vijaydurg) in February 1756. 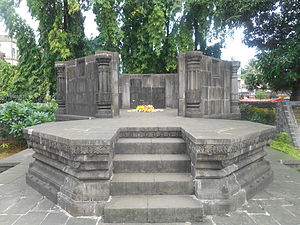 The Samadhi (mausoleum) of Kanhoji Angre at Alibag, Maharashtra.

Kanhoji Angre stands as one of the most notable admirals of the Maratha Navy who offered significant competition and damage to the prestige of the colonial powers. Historically, these same British and other European shipping powers who fought with Angre would later claim that he was nothing but a troublesome pirate or privateer. In so doing they deliberately and conveniently forgot that he had been appointed an admiral in the Maratha Navy by its legitimate leaders. This is a case of the ultimate victors being able to write the "final history" to slant things in their interest - ignoring any uncomfortable facts.

Kanhoji is also credited with the foresight that a Blue Water Navy's ultimate and strategic role is to keep the enemy engaged far from the shores of the homeland. At one time, Kanhoji was so successful that he attracted enterprising Europeans in his fleet as mercenaries, including making one Dutchman whom he appointed to the rank of Commodore. At the height of his power, Kanhoji commanded hundreds of warships and thousands of sailors while the British Navy had little in the way of naval resources in far-away India that could significantly offset the growing strength of the Maratha Navy.[15]

Kanhoji's harassment of British commercial interests (who hence called him a pirate) and the Battle of Swally led them to establish a small naval force that eventually became the modern Indian Navy. Today, a statue of Angre proudly stands in Indian Naval Dockyard in Mumbai. While the original fort built by Angre that overlooked the Naval Docks has vanished, its boundary wall is still intact and within it lays the Headquarters of Indian Western Naval Command and is called INS Angre (Indian Naval Station Angre).

The end of Angre family influences

The descendents of Angres continued to hold Kolaba till the 1840s and in 1843, it was annexed to British East India Company as per a despatch to Governor General of Bombay dated 30 December 1843.[16]

Chandrojirao Angre, a descendent of Kanhoji Angre and a contemporary Jijabai of same family supported the publication of History of the Angres in 1939 at Alibag Mumbai.[16]