The Territory of Kansas was an organized incorporated territory of the United States that existed from May 30, 1854, until January 29, 1861, when the eastern portion of the territory was admitted to the Union as the state of Kansas.

The territory extended from the Missouri border west to the summit of the Rocky Mountains and from the 37th parallel north to the 40th parallel north. Much of the eastern region of what is now the State of Colorado was part of Kansas Territory. The Territory of Colorado was created to govern this western region of the former Kansas Territory on February 28, 1861.

Site No. JF00-072: Nebraska–Kansas state line at intersection of Nebraska counties Thayer and Jefferson and Kansas counties Washington and Republic.

The Act contained thirty-seven sections. The provisions relating to Kansas Territory were embodied in the last eighteen sections. Some of the more notable sections were:

Section 19
Defines the boundaries of the Territory, gives it the name of Kansas, and prescribes that "when admitted as a State or States, the said Territory, or any portion of the same, shall be received into the Union with or without slavery, as their constitution may prescribe at the time of their admission." It further provides for its future division into two or more Territories, and the attaching of any portion thereof to any other State or Territory; and for the holding inviolable the rights of all Indian tribes until such time as they shall be extinguished by treaty.

Section 28
Declares the Fugitive Slave Law of 1850 to be in full force in the Territory.

Section 31
Locates the seat of government of the Territory, temporarily at Fort Leavenworth, and authorizes the use for public purposes of the government buildings.

Section 37
Declares all treaties, laws and other engagements made by the United States Government, with the Indian tribes inhabiting the Territory, to remain inviolate, notwithstanding anything contained in the provisions of this act. 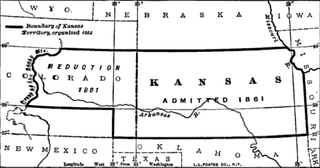 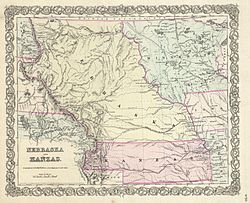 1855 first edition of Colton's map of Nebraska and Kansas Territories

Within a few days after the passage of the Kansas–Nebraska Act, hundreds of Missourians crossed into the adjacent territory, selected a section of land, and then united with fellow-adventurers in a meeting or meetings, intending to establish a pro-slavery preemption upon all this region.

As early as June 10, 1854, the Missourians held a meeting at Salt Creek Valley, a trading post 3 miles (5 km) west from Fort Leavenworth, at which a "Squatter's Claim Association" was organized. They said they were in favor of making Kansas a slave state if it should require half the citizens of Missouri, musket in hand, to emigrate there. According to these emigrants, abolitionists would do well not to stop in Kansas Territory, but keep on up the Missouri River until they reach Nebraska Territory, which was anticipated to be a free state. Before the first arrival of Free-State emigrants from the northern and eastern States, nearly every desirable location along the Missouri River had been claimed by men from western Missouri, by virtue of the preemption laws.

During the long debate that preceded the passage of the Kansas-Nebraska Act, it had become the settled opinion at the North that the only remaining means whereby the territory might yet be rescued from the grasp of the slave power, was in its immediate occupancy and settlement by anti-slavery emigrants from the free states in sufficient numbers to establish free institutions within its borders. The desire to facilitate the colonization of the Territory took practical shape while the bill was still under debate in the United States Congress. The largest organization created for this purpose was the New England Emigrant Aid Company, organized by Eli Thayer.

Emigration from the free states, including New England, Iowa, Ohio, and other Midwestern states, flowed into the territory beginning in 1854. These emigrants were known as Free-Staters. Because Missourians had claimed much of the land closest to the border, the Free-Staters were forced to establish settlements further into Kansas Territory. Among these were Lawrence, Topeka, and Manhattan.

To protect themselves against the encroachments of non-residents, the "Actual Settlers' Association of Kansas Territory" was formed. This association held a meeting on August 12, 1854, the object being the adoption of some regulations that should afford protection to the Free-State settlers, under laws not unlike those adopted by the pro-slavery squatters in the border region east.

The first territorial appointments, looking to the inauguration of a local government, under the provisions of the organic law, were made in June and July 1854. The officers appointed by President Pierce, whose appointments were confirmed by the United States Senate, and who entered upon the duties of their officer. The first governor was Andrew Horatio Reeder (of Easton, Pennsylvania) was appointed June 29, 1854 and removed July 28, 1858.

On March 30, 1855 "Border Ruffians" from Missouri entered Kansas during the territory's first legislative election and voted in a pro-slavery Territorial Legislature. Antislavery candidates prevailed in one election district, the future Riley County.

The first session of the legislature was held in Pawnee, Kansas (within the boundary of modern-day Fort Riley) at the request of Governor Reeder. The two-story stone building still stands and is open to the public as the first Territorial Capitol of Kansas. The building remained as the seat of the legislature for five days from July 2–6, 1855, then moved nearer Missouri to the Shawnee Methodist Mission.[1]

The last legislative act of the Territorial Legislature was the approval of the charter for the College of the Sisters of Bethany. This was February 2, 1861—four days after James Buchanan signed the act of Congress that officially brought Kansas into the Union.[2]

James H. Lane joined the Free-State movement in 1855 and became president the Topeka Constitutional Convention from October 23 to November 11, 1855. He was later a leader of "Jayhawkers". The first Free-state mass-meeting was in Lawrence on the evening of June 8, 1855, where it was stated that certain persons from the neighboring State of Missouri have, from time to time, made irruptions into this territory, and have fraud and force driven from and overpowered our people at the ballot-box, and have forced upon us a Legislature which does not represent the opinions of the legal voters of this Territory.

It was claimed that some Missourians had used violence toward the persons and property of the inhabitants of the Kansas Territory. It was agreed that Kansas should be a free State and that Missourians in the late Kansas election were a gross outrage on the elective franchise and rights of freemen, and a violation of the principles of popular sovereignty. Those attending did not feel bound to obey any law of illegitimate legislature enacted and opposed the establishment of slavery. The convention reserved the right to invoke the aid of the General Government against the lawless course of the slavery propaganda with reference to the Territory.