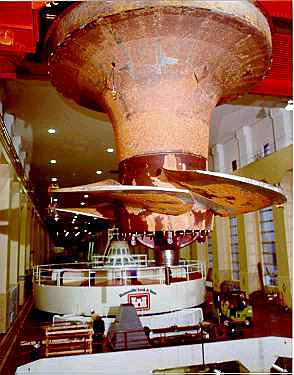 A Bonneville Dam Kaplan turbine after 61 years of service

The Kaplan turbine was an evolution of the Francis turbine. Its invention allowed efficient power production in low-head applications that was not possible with Francis turbines. The head ranges from 10–70 metres and the output from 5 to 200 MW. Runner diameters are between 2 and 11 metres. Turbines rotate at a constant rate, which varies from facility to facility. That rate ranges from as low as 69.2 rpm (Bonneville North Powerhouse, Washington U.S.) to 429 rpm. The Kaplan turbine installation believed to generate the most power from its nominal head of 34.65m is as of 2013 the Tocoma Power Plant (Venezuela) Kaplan turbine generating 235MW with each of ten 4.8m diameter runners.[1] 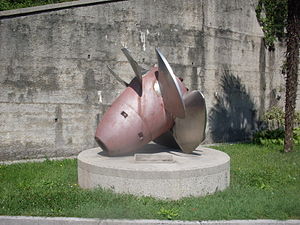 On this Kaplan runner the pivots at the base of the blade are visible; these allow the angle of the blades to be changed while running. The hub contains hydraulic cylinders for adjusting the angle.

Viktor Kaplan living in Brno, Czech Republic, obtained his first patent for an adjustable blade propeller turbine in 1912. But the development of a commercially successful machine would take another decade. Kaplan struggled with cavitation problems, and in 1922 abandoned his research for health reasons.

In 1919 Kaplan installed a demonstration unit at Poděbrady, Czechoslovakia. In 1922 Voith introduced an 1100 HP (about 800 kW) Kaplan turbine for use mainly on rivers. In 1924 an 8 MW unit went on line at Lilla Edet, Sweden. This marked the commercial success and widespread acceptance of Kaplan turbines. 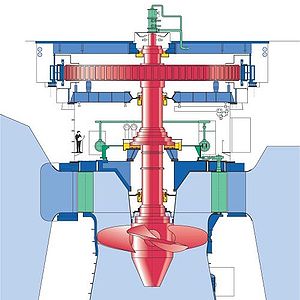 The Kaplan turbine is an outward flow reaction turbine, which means that the working fluid changes pressure as it moves through the turbine and gives up its energy. Power is recovered from both the hydrostatic head and from the kinetic energy of the flowing water. The design combines features of radial and axial turbines.

The inlet is a scroll-shaped tube that wraps around the turbine's wicket gate. Water is directed tangentially through the wicket gate and spirals on to a propeller shaped runner, causing it to spin.

The outlet is a specially shaped draft tube that helps decelerate the water and recover kinetic energy.

The turbine does not need to be at the lowest point of water flow as long as the draft tube remains full of water. A higher turbine location, however, increases the suction that is imparted on the turbine blades by the draft tube. The resulting pressure drop may lead to cavitation.

Variable geometry of the wicket gate and turbine blades allow efficient operation for a range of flow conditions. Kaplan turbine efficiencies are typically over 90%, but may be lower in very low head applications.[2]

Current areas of research include CFD driven efficiency improvements and new designs that raise survival rates of fish passing through.

Because the propeller blades are rotated on high-pressure hydraulic oil bearings, a critical element of Kaplan design is to maintain a positive seal to prevent emission of oil into the waterway. Discharge of oil into rivers is not desirable because of the waste of resources and resulting ecological damage. 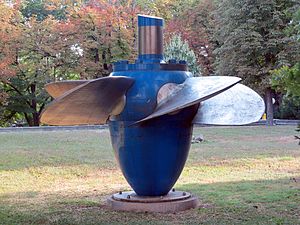 Kaplan turbines are widely used throughout the world for electrical power production. They cover the lowest head hydro sites and are especially suited for high flow conditions.

Inexpensive micro turbines on the Kaplan turbine model are manufactured for individual power production designed for 3 m of head which can work with as little as 0.3 m of head at a highly reduced performance provided sufficient water flow.[3]

Large Kaplan turbines are individually designed for each site to operate at the highest possible efficiency, typically over 90%. They are very expensive to design, manufacture and install, but operate for decades.

The Kaplan turbine is the most widely used of the propeller-type turbines, but several other variations exist: