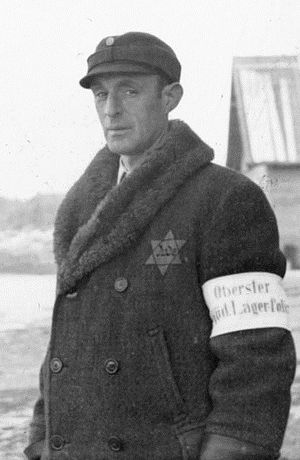 A kapo or prisoner functionary (German: Funktionshäftling, see § Etymology) was a prisoner in a Nazi concentration camp who was assigned by the SS guards to supervise forced labor or carry out administrative tasks in the camp. Also called "prisoner self-administration", the prisoner functionary system minimized costs by allowing camps to function with fewer SS personnel. The system was designed to turn victim against victim, as the prisoner functionaries were pitted against their fellow prisoners in order to maintain the favor of their SS guards. If they were derelict, they would be returned to the status of ordinary prisoners and be subject to other kapos. Many prisoner functionaries were recruited from the ranks of violent criminal gangs rather than from the more numerous political, religious and racial prisoners; those were known for their brutality toward other prisoners. This brutality was tolerated by the SS and was an integral part of the camp system.

Prisoner functionaries were spared physical abuse and hard labor, provided they performed their duties to the satisfaction of the SS guards. They also had access to certain privileges, such as civilian clothes and a private room.[1] While the Germans commonly called them kapos, the official government term for prisoner functionaries was Funktionshäftling.

The origin of "kapo" is unclear. The Jewish Virtual Library claims,[2] it is an abbreviated form of the word, Kameradschaftpolizei, (roughly, "comrade police force"), or perhaps Kameradschafts-Polizei.[3] It could have come from the Italian word for "head" and "boss", capo. According to the Duden, it is derived from the French word for "Corporal" (fr:Caporal).[4][5][6]

System of thrift and manipulation

Concentration camps were controlled by the SS, but day-to-day organization was supplemented by the system of functionary prisoners, a second hierarchy that made it easier for the Nazis to control the camps. These prisoners made it possible for the camps to function with fewer SS personnel. The prisoner functionaries sometimes numbered as high as 10% of the inmates.[7][8] The Nazis were able to keep the number of SS personnel who had direct contact with the prisoners very low in comparison to normal prisons today. Without the functionary prisoners, the SS camp administrations would not have been able to keep the day-to-day operations of the camps running smoothly.[9][10] The kapos often did this work for extra food, cigarettes, alcohol or other privileges.[11]

The system and hierarchy also inhibited solidarity among the prisoners.[13] There were tensions between the various nationalities as well as between the various prisoner groups, who were distinguished by different Nazi concentration camp badges. Jews wore yellow stars, other prisoners wore colored triangles pointed downward.

Prisoner functionaries were often hated by other prisoners as Nazi henchmen and were spat upon.[14] While some barrack leaders (blockälteste) tried to assist the prisoners under their command by secretly helping them get extra food or easier jobs, others were more concerned with their own survival and to that end, did more to assist the SS.[15][16]

Identified by green triangles, the befristeten Vorbeugungshäftling or "BV" ("temporary preventive custody prisoner") kapos,[17] were called "professional criminals" by other prisoners and were known for their brutality and lack of scruples. Indeed, they were selected by the SS because of those qualities.[1][13][18] According to former prisoners, the criminal functionaries were more apt to be helpful to the SS than political functionaries, who were more apt to be helpful to other prisoners.[15]

From Oliver Lustig's Dictionary of the Camp:

Vicenzo and Luigi Pappalettera wrote in their book The Brutes Have the Floor[19] that, every time a new transport of detainees arrived at Mauthausen, Kapo August Adam picked out the professors, lawyers, priests and magistrates and cynically asked them: "Are you a lawyer? A professor? Good! Do you see this green triangle? This means I am a killer. I have five convictions on my record: one for manslaughter and four for robbery. Well, here I am in command. The world has turned upside down, did you get that? Do you need a dolmetscher, an interpreter? Here it is!" And he was pointing to his bat, after which he struck. When he was satisfied, he formed a Scheisskompanie with those selected and sent them to clean the latrines.[20]

The SS used domination and terror to control the large camp populations with just a few SS guards. The system of prisoner functionaries was a "key instrument of domination"[1] in the concentration camps and was commonly called "prisoner self-government" in SS parlance.

The camp rules, constant threat of beatings, humiliation, punishment and the practice of punishing whole groups for the actions of one prisoner were psychological and physical torments on top of the starvation, and physical exhaustion from back-breaking labor. Prisoner functionaries were used to push the prisoners to work harder, saving the need for paid SS supervision. Many kapos felt caught in the middle, being both victim and perpetrator. Though kapos generally had a bad reputation, many suffered guilt about their actions, both at the time and after the war, as revealed in a book about Jewish kapos.[7]

Many prisoner functionaries, primarily from the ranks of the "greens" or criminal prisoners, could be quite brutal, especially when an SS guard was around, in order to justify their privileges.[17][21] They also played an active role in the beatings, even killing fellow prisoners.

One non-criminal functionary was Josef Heiden, a notorious Austrian political prisoner. Feared and hated, he was known as a sadist and was responsible for several deaths. He was released from Dachau in 1942 and became a member of the Waffen SS.[22] Some functionaries were personally involved in the mass murder of other prisoners.[23] Beginning in October 1944, reichsdeutsch criminal functionaries were sought out for transfer to the Dirlewanger Brigade.[1]

The armband of an oberkapo

The important functionary positions inside the camp were Lagerältester (camp leader or camp senior), Blockältester (block or barracks leader or senior) and Stubenältester (room leader).[note 1] The highest position that a prisoner could reach was Lagerältester.[15][24][25] He was placed directly under the camp commandant, had to implement his orders, ensure that the camp's normal daily routines ran smoothly and satisfy the superior regulations. The Lagerälteste had a key role in the selection of other prisoners as functionaries, making recommendations to the SS. Though dependent on the goodwill of the SS, through them, he had access to special privileges, such as access to civilian clothes or a private room.

The Blockältester (block or barracks leader) had to ensure that rules were followed in the individual barracks. He or she was also responsible for the prisoners in the barracks.[13][15] The Stubenälteste (room leader) was responsible for the hygiene, such as delousing, and order of each room in a barracks. The Blockschreiber (registrar or barrack clerk) was a record-keeping job, such as keeping track at roll calls.

Work crews outside the camp were supervised by a Vorarbeiter (foreman), a Kapo, or Oberkapo (chief kapo). These functionaries pushed their fellow prisoners, hitting and beating them, even killing them.[21]

Prisoner functionaries could often help other prisoners by getting them into better barracks, getting them assigned to lighter work.[15] On occasion, to get them removed from transport lists or even get them new identities in order to protect them from persecution.[12] This assistance was generally limited to the prisoners in the functionary's own group (fellow citizen or political comrade). The prisoner functionaries were in a precarious hierarchy between their fellow inmates and the SS. This situation was intentionally created, as revealed in a speech by Heinrich Himmler.

"The moment he becomes a Kapo, he no longer sleeps with them. He is held accountable for the performance of the work, that they are clean, that the beds are well-built. [...] So, he must drive his men. The moment we become dissatisfied with him, he is no longer Kapo, he's back to sleeping with his men. And he knows that he will be beaten to death by them the first night."
—Heinrich Himmler, June 21, 1944[1]

In National Socialist racial ideology, some races were "superior" and others "inferior". Similarly, the SS sometimes had racial criteria for the prisoner functionaries, sometimes one had to be racially "superior" to be a functionary. The group category was also sometimes a factor. A knowledge of foreign languages was also advantageous, particularly as the international population of the camps increased and they preferred a certain level of education.[13]

An eager prisoner functionary could have a camp "career" as an SS favorite and be promoted from Kapo to Oberkapo and eventually to Lagerältester, but he could also just as easily run afoul of the SS and be sent to the gas chambers.[26]

The Israeli Nazi and Nazi Collaborators (Punishment) Law of 1950, most famously used to prosecute Adolf Eichmann in 1961 and Ivan Demjanjuk in 1986, was originally introduced with the principal purpose of prosecuting Jewish collaborators with the Nazis.[27][28] Between 1951 and 1964, approximately 40 trials were held, mostly of people alleged to have been kapos.[28] Fifteen are known to have resulted in convictions, but only sketchy details are available since the records were sealed in 1995 for a period of 70 years from the trial date.[28] One person was convicted of crimes against humanity, which carried a mandatory death penalty, but the sentence was commuted to imprisonment.[28]

A small number of kapos were prosecuted in East and West Germany. In a well-publicised 1968 case, two Auschwitz kapos were put on trial in Frankfurt.[11] They were indicted for 189 murders and multiple assaults, found guilty of several murders, and sentenced to life imprisonment.[11]

During the Stutthof trials in Gdańsk, Poland, which took place in 1946 and 1947 for the prosecution of the Stutthof concentration camp personnel, five kapos were sentenced to death citing extreme brutality. Four of them were executed on 4 July 1946, and one on 10 October 1947. One Kapo was sentenced to 3 years imprisonment and one acquitted and released on 29 November 1947.[29][30]

Historian Karin Orth writes, "There was hardly a measure of the SS so perfidious as its attempt to delegate the implementation of terror and violence to the victims."[1]

"The concentration camp system owed its stability in no small way to a cadre of kapos, who took over the daily operations of the camp, relieving the SS personnel. Thus, absolute power was ubiquitous. Without the delegation of power, the system of discipline and supervision would have promptly disintegrated. The rivalry over supervisory, administrative and warehouse functionary jobs was, for the SS, just a welcome opportunity to pit groups of prisoners against each other and keep them dependent. The normal prisoner, however, was at the mercy of a dual authority, the SS, who often hardly seemed to be at the camp, and the prisoner functionaries, who were always there."
—Eugen Kogon, concentration camp survivor[16]

This role has been described in many books, among them Primo Levi's If This Is a Man, and Viktor Frankl's Man's Search for Meaning, the latter treating it from a psychiatrist's standpoint. It is also mentioned in Elie Wiesel's autobiography Night, and in Art Spiegelman's graphic novel Maus II, and is featured in the Gillo Pontecorvo movie Kapò.