Kappa Sigma (ΚΣ), commonly nicknamed Kappa Sig or K-Sig, is an American collegiate social fraternity founded at the University of Virginia in 1869. Kappa Sigma is one of the largest international fraternites with currently 316 active chapters and colonies in North America.[4] In 2012, the Fraternity "pledged more men than any other fraternity in history."[5] It is one of the leaders of all American fraternities in terms of pledges and new initiates per year, service hours, and philanthropic donations.[6][7] Its endowment fund, founded in 1919 is the oldest college fraternity foundation and has donated more than $6.5 million to undergrads since 1948. In 2012 alone, the Fraternity's endowment fund raised over $1 million in donations.[5]

According to the traditions of the fraternity, Kappa Sigma evolved from an ancient order, known in some accounts as "Kirjath Sepher", said to have been founded between 1395 and 1400 at the University of Bologna.[1][8][9] The story says that the corrupt governor of the city, one-time pirate and later papal usurper Baldassare Cossa, took advantage of the students at Bologna, one of Europe's preeminent universities which attracted students from all over the continent, by sending his men to assault and rob them; this motivated one of the university's scholars Manuel Chrysoloras to found a secret society of students beginning with five of his most devoted disciples, for mutual protection against Baldassare Cossa.[1]

On December 10, 1869, five students at the University of Virginia met in 46 East Lawn and founded the Kappa Sigma Fraternity in America. William Grigsby McCormick, George Miles Arnold, John Covert Boyd, Edmund Law Rogers, Jr., and Frank Courtney Nicodemus established the fraternity based on the traditions and of the ancient order in Bologna. These five founders became collectively known as the "Five Friends and Brothers."[8][9]

File:Kappa sigma 46 east lawn uva.JPG
46 East Lawn residence at the University of Virginia, site of the founding of the Kappa Sigma Fraternity

In 1872, Kappa Sigma initiated Stephen Alonzo Jackson, who would go on to transform a struggling local fraternity into a strong international Brotherhood. The organization attributes much of its success to Jackson noting that, "Since his death in 1892, the success of the Order is the direct result of Jackson's devotion 'to make Kappa Sigma the leading college fraternity of the world.'"[10]

In 1873, Kappa Sigma expanded to Trinity College (Now Duke University),[11] the University of Maryland, and Washington and Lee University.[9] The fraternity attributes this growth to the initiation of Stephen Alonzo Jackson in 1872. During his membership, Jackson expanded and revised the ritual of Kappa Sigma. He created the Supreme Executive Committee (SEC), which now serves as the governing body of the Kappa Sigma Fraternity on an international level. Jackson also introduced the idea of a frequent, national convention of all Kappa Sigmas, a practice now continued by the biennial Grand Conclave, and characterized the event as "the finest hour" of Kappa Sigma.[1]

In 1885, the publication of Kappa Sigma's quarterly magazine was commissioned under the name The Quarterly This publication ran successfully for 5 years until it was reorganized to run bi-monthly and renamed The Caduceus, the name it holds to this day.[12]

File:KSIGNHampshire.jpg
The Kappa Sigma chapter house at the University of New Hampshire in 1923.

In 1912, Wilbur F. Denious (who would later become Worthy Grand Master) struck upon the idea to establish a charitable endowment for Kappa Sigma. As a result of the hard work of him and many others, the Kappa Sigma Endowment Fund was established in 1919 "to support the charitable and beneficent purposes of the Kappa Sigma Fraternity."[13]

In 2002, along with Phi Delta Theta, Kappa Sigma ended its involvement in the North-American Interfraternity Conference at the national level due to disenchantment with the strategic direction of the organization.[citation needed] However, many individual chapters remain members of their host university's Interfraternity Conference, but no chapter is required to recognize or be involved with their university's IFC if they should choose not to.[14][15]

In 2003, the Kappa Sigma Fraternity ushered in an unprecedented era of growth for the fraternity.[16] Kappa Sigma would become the largest college fraternity.[7] It also established incentives to expand Kappa Sigma, and worked to reestablish chapters where they were dormant and establish colonies in new locations. Kappa Sigma annually broke recruiting records from 2003-2012,[17][18] setting the Guinness World Record with over 8,000 men pledged in the 2011-2012 academic year.[7][19]

In the Spring of 2005, Kappa Sigma Fraternity began fundraising for and construction of a new headquarters. This $6 million project had its grand opening on June 2, 2007.[20] At the 66th Conclave, the Kappa Sigma Endowment Fund was declared to be the only official educational foundation of the fraternity.

File:Ksstarandcrescent.png
The Star and Crescent

Kappa Sigmas are taught to live their lives by the Star and Crescent, which are also the symbols of the Fraternity that make up the official badge:

The Star and Crescent shall not be worn by every man, but only by him who is worthy to wear it.

above all else, one who walks in the light of God.[1]

They also follow the four pillars of the Fraternity: Fellowship, Leadership, Scholarship, and Service.[21]

The Star and Crescent is also used as part of the guidelines behind Kappa Sigma's strict no-tolerance anti-hazing policy. The Fraternity takes all allegations of hazing very seriously and routinely revokes charters from guilty chapters which can be as old as 130 years.[citation needed]

To be eligible for membership a prospective member must profess a belief in God, though adherence to a specific religion is not required.[1] In at least one situation, Kappa Sigma has revoked a chapter's charter for omitting the fraternity's religious requirements from its initiation.[22] 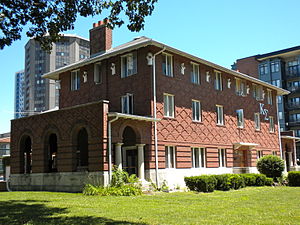 University of Illinois chapter house, listed in the National Register of Historic Places

Over 1,200 alumni volunteer as advisors for Kappa Sigma.[24]

There are over sixty districts covering America and Canada divided into five Areas. Typically, districts are composed of all the Kappa Sigma chapters and colonies within a State or Province, or a portion of a State or Province. Each district, composed of roughly 5 chapters each, are overseen by the District Grand Masters (DGM) and Assistant District Grand Masters (ADGM) who serve as liaisons between the undergraduate chapters and colonies and the SEC.

There also exists several committees (each with a volunteer commissioner) under the SEC (e.g. ritual committee, business and finance committee, long-range planning committee). Each committee is made up strictly of volunteers and some contain various targeted subcommittees.[citation needed]

The Undergraduate Advisory Committee (UAC), which is made of one undergraduate from each of the five areas, is charged with representing the their respective area as well as the general undergraduate perspective at all SEC meetings. 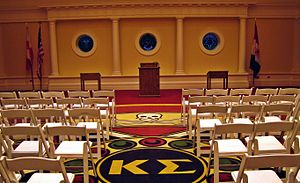 The "model chapter room" at Kappa Sigma headquarters, pictured in 2007.

There is a professional staff that manages the day-to-day operations the Fraternity at the international headquarters in Charlottesville, Virginia.

Also based out of international headquarters are the Area Recruitment Managers (ARM), who are in charge of recruitment goals and provide recruitment assistance to chapters in their respective geographic area.

While most activities of the Kappa Sigma Fraternity occur at the undergraduate chapters, the Fraternity oversees four international programs or campaigns.

File:Ks-agc-logo-reduced.gif
Logo for the Greater Cause program

The Greater Cause program is designed to record the activities and reinforce the concept that Kappa Sigma members should play an active role in their communities. Specifically, the program aims at raising $25 for and dedicating 25 hours per year towards charitable causes for each member. The program also aims at having 100% of the eligible chapter members registered to vote.[25] Every chapter organizes its own charitable events, usually donating the proceeds to a local charity.

During the 2012-2013 school year, Kappa Sigma donated a record $3 million and 1 million volunteer hours to charitable causes around the United States.[4]

Kappa Sigma's Champion Quest Program is a "results-driven" recruitment initiative aimed at increasing the number of men added to the Kappa Sigma each year.

The fraternity attributes its success to "its pursuit of Jackson's Dream", a reference to the dream of the influential member Steven Alonzo Jackson, and notes that the campaign has "yielded six consecutive years of record-setting membership growth and elevated Kappa Sigma to new heights, as the most preferred college fraternity in North America."[10]

Brothers in Action (BIA) is the "official membership development program of Kappa Sigma Fraternity" which seeks both individual and chapter development through goal setting and through emphasizing the four cornerstones of Kappa Sigma: Fellowship, Leadership, Scholarship and Service.

The Brothers in Action program begins with the "BIA for Pledges program" and continues throughout your involvement with Kappa Sigma, including opportunities for personal growth and development at the various leadership conferences and conclaves.[26]

During the 66th Grand Conclave in 2007, the Fraternity announced a new charity entitled the "Kappa Sigma Fraternity Military Heroes Campaign". The effort focuses service and donations towards soldiers disabled or killed in the line of duty. The Supreme Executive Committee determines how the contributions will be distributed to support these Patriots and Veterans. In recent years The American chapters raised money for the Fisher House Foundation whereas the Canadian Chapters raised money for either the Fisher House Foundation or one of the two other approved Canadian Armed Forces organizations and specifically The Valour Place.

Currently, the Endowment Fund, along with the Kappa Sigma Fraternity, holds in trust for the members of Kappa Sigma, the fraternity's headquarters in Charlottesville, Virginia.

In 2015, the Kappa Sigma fraternity at Miami University ceased to be recognized by the national headquarters for forcing pledges to work out between 3:30 a.m. and 6 a.m. (causing exhaustion), cleaning fraternity member rooms, and buying them food.[28]

In 2015, two Kappa Sigma members from the University of West Virginia were arrested and charged with hazing and conspiracy for the death of Nolan Burch at an initiation ceremony. Burch died due to alcohol poisoning, his blood alcohol level was .493.[29]

At a Kappa Sigma fraternity house at Tulane University in 2013, police found over 20 grams of marijuana, 68.7 grams of psilocybin mushrooms, over 50 doses of LSD, .91 grams of DMT, 47.6 grams of opium and paraphernalia, and .75 grams of powdered cocaine.[30] Two fraternity members were arrested and charge for possession of the drugs.

In 2006, four Kappa Sigma members and an alumni member from the Winthrop University were arrested for detonating ice bombs in the backyard of their fraternity house. The fraternity was placed on social suspension by national leadership of the fraternity.[31]