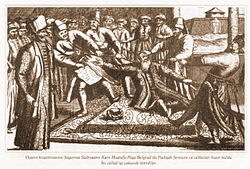 Kara Mustafa Pasha's strangulation by a silk cord on 25 December 1683.

Merzifonlu Kara Mustafa Pasha (1634/1635 – 25 December 1683) was an Ottoman military leader and grand vizier who was a central character in the Ottoman Empire's last attempts at expansion into both Central and Eastern Europe.

Born to Albanian parents[1][2][3] in Merzifon, Mustafa was educated in the household of Mehmed Koprulu and married into the powerful Köprülü family.[4] In 1659, he became governor of Silistria and subsequently held a number of important posts. Within ten years, he was acting as deputy for his brother-in-law, the grand vizier Köprülü Fazıl Ahmed Pasha when absent from the Sultan's court.[4]

He served as a commander of ground troops in a war against Poland, negotiating a settlement with Jan Sobieski in 1676 that added the province of Podolia to the empire. The victory enabled the Ottomans to transform the Cossack regions of the southern Ukraine into a protectorate. When his brother-in-law Köprülü Fazıl Ahmed Pasha died that same year, Mustafa succeeded him as grand vizier.[4]

He was less successful in combating a Cossack rebellion that began following the settlement with the Poles. After some initial victories, intervention by Russia turned the tide and forced the Turks to conclude peace in 1681, effectively returning the Cossack lands to Russian rule with the exception of a few forts on the Dnieper and Southern Bug rivers.[4]

In 1683, he launched a campaign northward into Austria in a last effort to expand the Ottoman Empire after more than 150 years of war. By mid-July, his 100,000-man army had besieged Vienna (guarded by 10,000 Habsburg soldiers), following in the footsteps of Suleiman the Magnificent in 1529. By September, he had taken a portion of the walls and appeared to be on his way to victory.

But on 12 September 1683, a Polish army under King Jan Sobieski took advantage of dissent within the Turkish military command and poor disposition of his troops, winning the Battle of Vienna with a devastating flank attack led by Sobieski's Polish Winged Hussars. The Turks retreated into Hungary, leaving the kingdom for retaking by the Austrians in 1686.

The defeat cost Mustafa his position, and ultimately, his life. On 25 December 1683, Kara Mustafa was executed in Belgrade at the order of Mehmed IV. He suffered death by strangulation with a silk cord, which was the method of capital punishment inflicted on high-ranking persons in the Ottoman Empire. His last words were, "Am I to die?" and "As God pleases."[4]

In the 2012 Polish and Italian historical drama film September Eleven 1683 about the Battle of Vienna, Kara Mustafa Pasha is portrayed by Italian actor Enrico Lo Verso.