Karagöz (meaning blackeye in Turkish) and Hacivat (shortened in time from "Hacı İvaz" meaning "İvaz the Pilgrim", and also sometimes written as Hacivad) are the lead characters of the traditional Turkish shadow play, popularized during the Ottoman period and then spread to most nation states that comprised the Ottoman Empire and most prominently in Turkey and Greece.

The central theme of the plays are the contrasting interaction between the two main characters. They are perfect foils of each other: In the Turkish version Karagöz represents the illiterate but straightforward public, whereas Hacivat belongs to the educated class, speaking Ottoman Turkish and using a poetical and literary language. Although Karagöz has definitely been intended to be the more popular character with the Turkish peasantry, Hacivat is always the one with a level head. Though Karagöz always outdoes Hacivat’s superior education with his “native wit,” he is also very impulsive and his never-ending deluge of get-rich-quick schemes always results in failure. In the Greek version Hacivat (Hatziavatis) is the more educated Turk who works for the Ottoman state, and often represents the Pasha, or simply law and order, whereas Karagöz (Karagiozis) is the poor peasant Greek, nowadays with Greek-specific attributes of the raya.

Hacivat continually attempts to “domesticate” Karagöz, but never makes progress. According to Turkish dramaturge Kırlı, Hacivat emphasizes the upper body with his refined manners and aloof disposition, while Karagöz is more representational of “the lower body with eating, cursing, defecation and the phallus."[1] Other characters in the plays are different ethnic characters living under Ottoman domain such as (in the Turkish version) Armenians, Albanians, Greeks, Frenks, Arabs and Akarabs(Arabs with white skin, usually depicting the people of Aleppo), each with their unique, stereotypical traits. In the Greek version new characters have been introduced or altered: The Pasha, the daughter of the Vezir (both representing the state, the latter being very beautiful and courted unsuccessfully by Karagöz (Karagiozis), Barba-Giorgos the enormous Roumeliot shepherd who acts as an uncle to Karagöz, the Morfonios (beautiful) with the enormous nose (adapted from a previous Ottoman character), Velingekas (the policeman who represents the Ottoman state but has his own macho honor code) as well as inventions such as Stavrakas (the Piraeot Rebet, macho character) and his Rebetiko band, Nionios from Zante, the Cretan, the Jew (adapted from the Ottoman character).

When the plays were first performed is unclear. Some believe that the first Karagöz-Hacivat play was performed for Sultan Selim I (reigned 1512–1520) in Egypt after his conquest of the country in 1517, but 17th century writer Evliya Çelebi stated that it had been performed in the Ottoman palace as early as the reign of Bayezid I (reigned 1389–1402). In the 16th century, Ottoman Grand Mufti Mehmet Ebussuud el-İmadi issued a celebrated opinion allowing the performance of Karagöz plays.[2]

According to one Turkish legend, the first performance of karagöz occurred when a lowly commoner visited the sultan. Rather than simply making a complaint, as most commoners did, he put on a short puppet show to tell a tale about the sultan’s corrupt officials. The myth states that the sultan was delighted by the performance so much that he appointed the puppeteer as his Grand Vizier and punished the corrupt officials that had inspired the puppeteer’s tale. Another story is that the two main characters, Karagöz and Hacivat (alternatively spelled as Hacivad) were actual people. These two legendarily clownish individuals were construction workers on a mosque in Bursa sometime in the mid-14th century. Their silly antics distracted the other workers, slowing down the construction, and the ruler at the time ordered their execution. They were so sorely missed that they were immortalized as the silly puppets that entertained the Ottoman Empire for centuries.[1]

Karagöz can be deceitful, lewd, and even violent.[1] Other characters in these plays are the drunkard Tuzsuz Deli Bekir with his wine bottle, the long-necked Uzun Efe, the opium addict Kanbur Tiryaki with his pipe, Altı Kariş Beberuhi (an eccentric dwarf), the half-wit Denyo, the spendthrift Civan, and Nigâr, a flirtatious woman. There may also be dancers and djinns, and various portrayals of non-Turks: an Arab who knows no Turkish (typically a beggar or sweet-seller), a black servant woman, a Circassian servant girl, an Albanian security guard, a Greek (usually a doctor), an Armenian (usually a footman or money-changer), a Jew (usually a goldsmith or scrap-dealer), a Laz (usually a boatman), or an Iranian (who recites poetry with an Azeri accent).[1]

Karagöz had been very popular and was most frequently performed in coffeehouses. The month of Ramadan saw many performances of Karagöz plays. After a day of fasting, crowds would wander the streets and celebrate, eating, drinking, dancing, watching street performers, and going into the coffeehouses to see Karagöz plays that drew large crowds.[3] Up until Tanzimat, a series of Westernizing reforms in the 19th century, the plays had frequently had an unlimited amount of satirical and obscene license, making many sexual references and political satire. Eventually, however, the puppets began to face repression from Ottoman authorities, up until the founding of the Turkish Republic, when Karagöz had become almost entirely unrecognizable from its original form.[4] 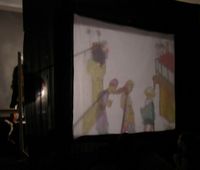 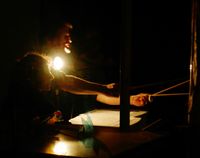 Though Karagöz theatre requires a skilled puppeteer who is capable of controlling the puppets and using different voices, it only requires about four people for a performance that can include dozens of characters. An apprentice, called the sandıkkâr, assists the puppeteer—who is called either the Karagözcü, hayalî (meaning both "imaginary" and "image creator") or hayalbaz— by handing him the puppets in the correct order and setting up the theatre before the show. A singer, or yardak, might sing a song in the prelude, but the yardak is never responsible for voicing a character. The yardak may be accompanied by a dairezen on a tambourine. The simple design of karagöz theatre makes it easy to transport; the puppets are all flat and the screen can be folded into a neat square, which is optimal for traveling karagöz artists. The screen and table behind it take up much less space than a stage so that a performance can be set up anywhere that is dark enough for shadows to be cast. A single hayalî impersonates every single character in the play by mimicking sounds, talking in different dialects, chanting or singing songs of the character in focus. He is normally assisted by an apprentice who sets up and tears down, and who hands him the puppets as needed. The latter task might also be performed by a sandıkkâr (from "sandık", "chest"). A yardak might sing songs, and a dairezen play the tambourine.[1]

The puppets themselves have jointed limbs and are made from the hide of a camel or a water buffalo. The hide is worked until it is semi-transparent; then it is colored, resulting in colorful projections. The lamp for projection is known as a şem’a (literally "candle"), but is typically an oil lamp. Images are projected onto a white muslin screen known as the ayna ("mirror"). Projections is from the rear, so the audience does not see the puppeteer. Puppets are typically 35–40 centimeters in height.[1]

Karagöz and Hacivat has also been adapted to other media. For example, the 2006 live action Turkish film "Hacivat Karagöz Neden Öldürüldü" (Who Killed Shadows) directed by Ezel Akay.[6]