From Infogalactic: the planetary knowledge core
Jump to: navigation, search
For the village in Datça, see Datça.

Karaköy, the modern name for the ancient Galata, is a commercial neighborhood in the Beyoğlu district of Istanbul, Turkey, located at the northern part of the Golden Horn mouth on the European side of Bosphorus.

Karaköy is one of the oldest and most historic districts of the city, and is today an important commercial center and transport hub. The location is connected with the surrounding neighborhoods through streets originating from Karaköy Square. The Galata Bridge links Karaköy to Eminönü in the southwest, Tersane Street to Azapkapı in the west, Voyvoda Street to Şişhane in the northwest, the steeply sloping Yüksek Kaldırım Street to Beyoğlu in the north, Kemeraltı Street and Necatibey Street to Tophane in the northeast.

The commercial quarter, which was originally the meeting place for banks and insurance companies in the 19th century, is today also home to mechanical, electrical, plumbing and electronic parts suppliers.

The word Karaköy is the combination of "Kara" and "köy". "Kara" probably originates in the Turkish word Karay, referring to a Turkic-speaking Jewish community called the Crimean Karaites. At one time, Karaites were a majority of the people who lived in this district.[1] In modern Turkish language, however, "kara" means black or dark in rural areas. "Köy" means village.

Karaköy has been a port area since Byzantine times when the north shore of the Golden Horn was a separate settlement, across the Golden Horn from Constantinople. After the re-conquest of the city from the Latin Empire on 1261, the emperor of Byzantium granted to the merchants of Genoa permission to settle and do business at this location as part of a defense pact.

The district developed rapidly, and the Genoeses built sturdy fortifications to protect themselves and their warehouses. Fragments of the Genoese walls are still visible, but the Galata Tower, the highest and strongest point in the walls, is the most visible of all. In the 15th century, Galata looked just like an Italian city. 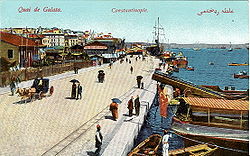 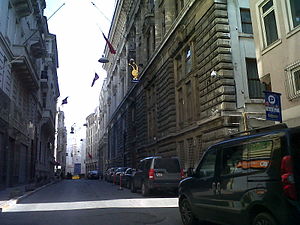 Bankalar Caddesi was Istanbul's financial center during the Ottoman period. Completed in 1892, the Ottoman Central Bank headquarters is the first building at right.

In 1455, right after the conquest of Constantinople, the district had three categories of inhabitants: temporarily sojourning Genoese, Venetian and Catalan merchants; Genoese of Ottoman citizenship; and Greeks, Armenians and Jews. The composition of the population changed in a short time, and according to a census of 1478, almost half of the district population was Muslim. From 1500 on, more Sephardic Jews settled here, who escaped from the Spanish Inquisition.

Karaköy experienced a second wave of Christian inflow when British, French and Italian forces of the Allies came to Istanbul to fight in the Crimean War (1854–1856). The lack of piers made the unloading of troops and military equipment difficult. In 1879, a French company obtained a concession to build the quay in Karaköy, which was completed in 1895.[2]

In the last decade of the 19th century, Karaköy developed itself to a banking district. The Ottoman Bank established here its headquarters, Italian and Austrian insurance companies opened branch offices.

With the increasing trade activity in the early 20th century, the port was extended with customs buildings, passenger terminals and naval warehouses. Karaköy became also famous for its Greek taverns located along the quays.

After 1917, thousands of White Russians fleeing the Bolshevik Revolution landed here and settled in the area. 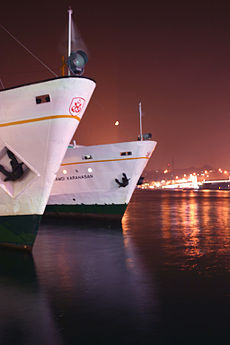 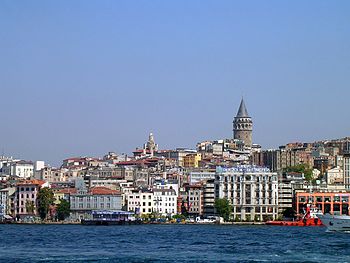 View of Karaköy and the Galata Tower from the Bosphorus

Karaköy is today a major transport hub for intercity and international passenger traffic.

The Galata Bridge connects Karaköy with the Old City, on which the fast tram line Zeytinburnu-Kabataş runs. The underground funicular, called Tünel, has been transferring people from its lower end in Karaköy upwards to İstiklal Avenue in Beyoğlu since 1876. Ferry boats run every 10 to 20 minutes from the ferry terminal on a pontoon to Haydarpaşa train terminal and Kadıköy across the Asian shore of Bosphorus.

From the Port of Karaköy, ferries operate to destinations at Black Sea such as Odessa, Yalta, Sevastopol, Kherson, Eupatoria, Novorossisk in Ukraine and Constanţa in Romania. Huge luxury cruise ships sailing to Mediterranean ports such as Athens in Greece, Dubrovnik in Croatia, Civitavecchia (Rome) and Venice in Italy berth also at the Karaköy port.[3]

Karaköy is also a popular place to eat especially seafood, börek (pastry), muhallebi (Turkish pudding) and baklava. Numerous tiny fish restaurants, pubs and cafés located under the Karaköy side of the Galata Bridge roadway attract local and foreign tourists. Liman Lokantası (the Port Restaurant), situated in the passenger terminal building, is a renowned place to dine.

The presence of various religious and educational sites in Karaköy such as Latin Catholic, Greek Orthodox, Armenian and Bulgarian churches, Jewish synagogues, and Greek, Jewish, French, Italian and Austrian schools as well reflect its historic cosmopolitan character.[4] A wealth of architectural monuments can be found in Karaköy, left by the European communities that thrived here during the Ottoman period.