From Infogalactic: the planetary knowledge core
Jump to: navigation, search
For other meanings, see Karaman (disambiguation).

The Karamanids or Karamanid dynasty (Modern Turkish: Karamanoğulları, Karamanoğulları Beyliği), also known as the Principality of Karaman and Beylik of Karaman (Karaman Beyliği ), was one of the Anatolian beyliks, centered in south-central Anatolia around the present-day Karaman Province. From the 13th century until its fall in 1487, the Karamanid dynasty was one of the most powerful Turkish beyliks in Anatolia.[3]

The Karamanids traced their ancestry from Hodja Sad al-Din and his son Nure Sufi Bey, who emigrated from Arran (roughly encompassing modern-day Azerbaijan) to Sivas because of the Mongol invasion in 1230.

The Karamanids were members of the Salur tribe of Oghuz Turks.[4] According to Muhsin Yazicioglu and others, they were members of the Afshar tribe,[5] which participated in the revolt led by Baba Ishak and afterwards moved to the western Taurus Mountains, near the town of Larende, where they came to serve the Seljuks. Nûre Sûfi worked there as a woodcutter. His son, Kerîmeddin Karaman Bey, gained a tenuous control over the mountainous parts of Cilicia in the middle of the 13th century. A persistent but spurious legend, however, claims that the Seljuq Sultan of Rum, Kayqubad I, instead established a Karamanid dynasty in these lands.[6]

Karaman Bey expanded his territories by capturing castles in Ermenek, Mut, Ereğli, Gülnar, and Silifke. The year of the conquests is reported as 1225,[7] during the reign of Ala al-Din Kaykubadh I (1220–1237), which seems excessively early. Karaman Bey's conquests were mainly at the expense of the Kingdom of Lesser Armenia (and perhaps at the expense of Rukn al-Din Kilij Arslan IV, 1248–1265); in any case it is certain that he fought against the Kingdom of Lesser Armenia (and probably even died in this fight) to such extent that King Hethum I (1226–1269) had to place himself voluntarily under the sovereignty of the great Khan, in order to protect his kingdom from Mamluks and Seljuks (1244).

The rivalry between Kilij Arslan IV and Izz al-Din Kaykaus II allowed the tribes in the border areas to live virtually independently. Karaman Bey helped Kaykus, but Arslan had the support of both the Mongols and Pervâne Sulayman Muin al-Din (who had the real power in the sultanate).

The Mongolian governor and general Baiju was dismissed from office in 1256 because he had failed to conquer new territories, but he continued to serve as a general and appeared, the same year, fighting the Sultan of Rum, who had not paid the tax, and he managed to defeat the sultan a second time. Rukn al-Din Kilidj Arslan IV got rid of almost all hostile begs and amirs except Karaman Bey, to whom he gave the town of Larende (now Karaman, in honor of the dynasty) and Ermenek (c. 1260) in order to win him to his side. In the meantime, Bunsuz, brother of Karaman Bey, was chosen as a Candar, or bodyguard, for Kilij Arslan IV. Their power rose as a result of the unification of Turkish clans that lived in the mountainous regions of Cilicia with the new Turkish population transferred there by Kayqubad.

Good relations between the Seljuqs and the Karamanids did not last. In 1261, on the pretext of supporting Kaykaus II, who had fled to Constantinople as a result of the intrigues of the chancellor Mu'in al-Din Suleyman, the Pervane, Karaman Bey and his two brothers, Zeynül-Hac and Bunsuz, marched toward Konya, the Seljuq capital, with 20,000 men. A combined Seljuq and Mongol army, led by the Pervane, defeated the Karamanid army and captured Karaman Bey's two brothers.

After Karaman Bey died in 1262, his older son, Mehmet I of Karaman, became the head of the house. He immediately negotiated alliances with other Turkmen clans to raise an army against the Seljuqs and Ilkhanids. During the 1276 revolt of Hatıroğlu Şemseddin Bey against Mongol domination in Anatolia, Karamanids also defeated several Mongol-Seljuq armies. In the Battle of Göksu in 1277 in particular, the central power of the Seljuq was dealt a severe blow. Taking advantage of the general confusion, Mehmed Bey captured Konya on 12 May and placed on the throne a pretender called Jimri, who claimed to be the son of Kaykaus. In the end, however, Mehmed was defeated by Seljuq and Mongol forces and executed with some of his brothers in 1278. 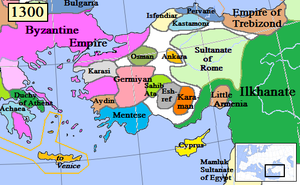 Despite these blows, the Karamanids continued to increase their power and influence, largely aided by the Mamluks of Egypt, especially during the reign of Baybars. Karamanids captured Konya on two more occasions in the beginning of the 14th century, but were driven out the first time by emir Chupan, the Ilkhanid governor of Anatolia, and the second time by Chupan's son and successor Timurtash. An expansion of Karamanoğlu power occurred after the fall of the Ilkhanids.[when?] A second expansion coincided with Karamanoğlu Alâeddin Ali Bey's marriage to Nefise Sultan, the daughter of the Ottoman sultan Murat I, the first important contact between the two dynasties.

As Ottoman power expanded into the Balkans, Aleaddin Ali Bey captured the city of Beyşehir, which had been an Ottoman city. However, it did not take much time for the Ottomans to react and march on Konya, the Karamanoğlu capital city. A treaty between the two kingdoms was formed, and peace existed until the reign of Bayezid I.

Timur gave control of the Karamanid lands to Mehmet Bey, the oldest son of Aleaddin Ali Bey. After Bayezid I died in 1403, the Ottoman Empire went into a political crisis as the Ottoman family fell prey to internecine strife. It was an opportunity not only for Karamanids but also for all of the Anatolian beyliks. Mehmet Bey assembled an army to march on Bursa. He captured the city and damaged it; this would not be the last Karamanid invasion of Ottoman lands. However, Mehmet Bey was captured by Bayezid Pasha and sent to prison. He apologized for what he had done and was forgiven by the Ottoman ruler.

Ramazanoğlu Ali Bey captured Tarsus while Mehmet Bey was in prison. Mustafa Bey, son of Mehmet Bey, retook the city during a conflict between the Emirs of Sham and Egypt. After that, the Egyptian sultan Sayf ad-Din Inal sent an army to retake Tarsus from the Karamanids. The Egyptian Mamluks damaged Konya after defeating the Karamanids, and Mehmet Bey retreated from Konya. Ramazanoğlu Ali Bey pursued and captured him; according to an agreement between the two leaders, Mehmet Bey was exiled to Egypt for the rest of his life.

During the Crusade of Varna against the Ottomans in 1443–44, Karamanid İbrahim Bey marched on Ankara and Kütahya, destroying both cities. In the meantime, the Ottoman sultan Murad II was returning from Rumelia with a victory against the Hungarian Crusaders. Like all other Islamic emirates in Anatolia, the Karamanids were accused of treason. Hence, İbrahim Bey accepted all Ottoman terms. The Karamanid state was eventually terminated by the Ottomans in 1487, as the power of their Mameluke allies was declining. To never again gather and threaten the integrity of the Empire, they displaced the entire population to the last man. Some were resettled in various parts of Anatolia. Large groups are accommodated in northern Iran on the territory of present-day Azerbaijan. The main part is brought to newly conquered territories in north-western Bulgaria—Ludogorie. Another group of what is now northern Greece, southern Bulgaria—present-day Kardzhali region and Macedonia. Ottomans founded Karaman Eyalet from former territories of Karamanids.

The Karamanid flag according to the Catalan Atlas

According to Abraham Cresques' Catalan Atlas (compiled in 1375), the flag of Karamanoğlu consisted of a blue six-edged star. The fact that the flag of the Karamanoğlu showed similarities to the Star of David (mainly associated with modern-day Judaism and the State of Israel), led to some historians linking the Karamanids to the People of Israel.[citation needed] However, in medieval times, this star was a popular Islamic symbol (especially among the Hanafi Madhhab[8]) known as the Seal of Solomon and was used by several of the Anatolian beyliks (such as the Isfendiyarids). As such the seal was also used by Ottomans in their mosque decorations, coins and even in the personal flags of individual Pasha (e.g. that of Hayreddin Barbarossa[9]).

Power of the Karamanid state in Anatolia

According to Mesâlik-ül-Ebsâr, written by Şehâbeddin Ömer, the Karamanid army had 25,000 riders and 25,000 saracens. They could also rely on some Turkmen tribes and their warriors.

Their economic activities depended mostly on control of strategic commercial areas such as Konya, Karaman and the ports of Lamos, Silifke, Anamur, and Manavgat.

66 mosques, 8 hammams, 2 caravanserais and 3 medreses built by the Karamaninds survived to the present day. Notable examples of Karamanid architecture include: