Karl Theodor Anton Maria von Dalberg (8 February 1744 – 10 February 1817) was Archbishop of Mainz, Arch-Chancellor of the Holy Roman Empire, Prince of Regensburg, Prince-Primate of the Confederation of the Rhine and Grand Duke of Frankfurt.

Born in Herrnsheim near Worms, Germany, he was the son of Franz Heinrich, administrator of Worms, one of the chief counsellors of the Prince-elector and Archbishop of Mainz. Karl devoted himself to the study of Canon law, and entered the church. Having been appointed in 1772 governor of Erfurt, he won further advancement by his successful administration. In 1787 he was elected coadjutor of Mainz and the Bishopric of Worms, and in 1788 of the Bishopric of Constance. In 1802 he became Archbishop-Elector of Mainz and Arch-Chancellor of the Holy Roman Empire. 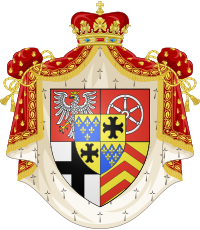 Coat of arms of the Grand Duke

As statesman, Dalberg was distinguished by his patriotic attitude, whether in ecclesiastical matters, in which he leaned to the Febronian view of a German national church, or in his efforts to galvanize the atrophied machinery of the Empire into some sort of effective central government of Germany. Failing in this, he turned to the rising star of Napoleon, believing that he had found in him the only force strong enough to save Germany from dissolution.

By the Treaty of Lunéville in 1801, in which all territories on the left bank of the river Rhine were ceded to France, Dalberg had to surrender Worms, Constance and also Mainz. However, he retained Aschaffenburg and in 1803 gained the Reichstädte (Free Imperial Cities) of Wetzlar and Regensburg and the territory of the Bishopric of Regensburg. Since Mainz had been annexed by France, Dalberg's Archiepiscopal see was transferred to Regensburg as well; his eastern territories became known as the Principality of Regensburg.

In 1806, the Reichsstadt of Frankfurt was included among his territories.[citation needed] After the Treaty of Schönbrunn (1810) he was elevated by the French to the rank of Grand Duke of Frankfurt. This greatly augmented his territories, although he had to cede Regensburg to the Kingdom of Bavaria. As Grand Duke of Frankfurt he ordered all restrictions on the Jews of Frankfurt lifted. This was opposed by the Christian town council, until 1811, when he issued a proclamation ending the requirement that Jews live in the ghetto or pay special taxes.[citation needed]

In 1813 he resigned from all his offices except the Archbishopric of Regensburg in favor of Napoleon's stepson Eugène de Beauharnais, who had been heir apparent since 1810.[citation needed]

He died in 1817 as Archbishop of Regensburg.

Though Dalberg's political subservience to Napoleon was resented by later generation in Germany, as a man and prelate he is remembered as amiable, conscientious and large-hearted. Himself a scholar and author, he was a notable patron of letters, and was the friend of Goethe, Schiller and Wieland.