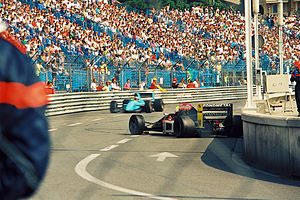 Wendlinger (in the back) at the 1992 Monaco Grand Prix

Born in Kufstein,[1] Wendlinger started his career in karting and in Formula Ford before entering the German Formula 3 Championship in 1988. After managing tenth place in that inaugural season, Wendlinger won the crown in 1989, which earned him also a drive in the Mercedes-Benz sportscar team for 1990.

In 1991, he continued to race with Mercedes sportscars — alongside a Formula 3000 programme with the Helmut Marko team. Towards the end of the year, Mercedes' team boss Jochen Neerpasch placed two of his protégés in Formula One. Schumacher went to the Jordan team before signing for Benetton, whilst Wendlinger made a low key Formula One debut with the Leyton House outfit for the final two Grands Prix of the season.

Wendlinger's Formula One debut came at the 1991 Japanese Grand Prix at Suzuka, bringing some money to the beleaguered Leyton House team in place of long-serving Ivan Capelli. He qualified in 22nd place in a field of 26, but was unable to convert that into anything more, after he retired due to a big collision at turn one, between himself, J.J. Lehto, Andrea de Cesaris and Emanuele Pirro. His second race didn't fare much better as the Adelaide circuit was a wash-out, torrential rain leading to a curtailed event. Wendlinger was classified in 20th place, two laps down on eventual winner Ayrton Senna, after aquaplaning on some of the huge puddles of water present that day.

Wendlinger was kept at the renamed March team in 1992, alongside Paul Belmondo. The team were struggling financially due to the withdrawal of the Leyton House organisation, the only modifications to the 1991 car being reworking the cockpit to accommodate Wendlinger's tall frame. The results were very encouraging, including starting 7th at the opening South African Grand Prix but results were limited by the team's financial restraints. For example, at the Spanish Grand Prix the drying track at the start saw the Footwork team make a late change of tyres to their cars on the starting grid, incurring a fine but finishing 5th and 7th. Wendlinger was 8th, March being unable to afford the fine for changing his tyres at the same time. However, at the Canadian Grand Prix in Montreal a race of attrition allowed Wendlinger to bring the car home in fourth position, albeit a lap down — but nonetheless a huge result considering the financial troubles his team were in. These three points allowed Wendlinger to finish 12th in the drivers championship ahead of respected names such as Ivan Capelli, Thierry Boutsen, Johnny Herbert and former Brabham and Tyrrell driver Stefano Modena.

For 1993, Wendlinger was re-united with Peter Sauber, who that year had become a Formula One team owner. Much was expected of the team and early on Wendlinger and team-mate JJ Lehto mixed with the front runners. Initially he was out-paced by the Finn, who scored points in two of the first four races though some of this was down to bad luck; Wendlinger had qualified 5th at Donington for example, only to be eliminated by Michael Andretti on the first lap. At the Monaco Grand Prix Wendlinger and Lehto collided, the team blaming the Finn. After that, Wendlinger's results improved. He scored his first point of the season in the next round and added three more points scores — the best being 4th at the Italian Grand Prix after a long battle with Andretti. Other points finishes in Portugal and Hungary helped give Wendlinger 12th in the Drivers' Championship again with seven points — two points and a place ahead of the more experienced Lehto.

For 1994 Wendlinger was retained as Mercedes made their official return to Formula 1, buying a stake in Ilmor and becoming the team's engine suppliers. Heinz-Harald Frentzen arrived in place of Lehto. The season started well for Wendlinger; he scored a point in the first race of the year at Interlagos and drove to fourth place in the San Marino race, an event marred by the deaths of both Wendlinger's countryman Roland Ratzenberger and the multiple world champion Ayrton Senna.

The next race was in Monaco for the fourth round of the Championship. During the first practice session, Wendlinger exited the tunnel and lost control of the car under braking for the Nouvelle Chicane. The Sauber hit the wall sideways with considerable force. Wendlinger's head struck a water-filled barrier within the metal crash barrier. FIA doctors found Wendlinger unconscious, and although his vital signs were quickly stabilized, he remained in a coma for several weeks and did not drive in a race for the rest of the year.[2] He had planned to make his comeback at the Japanese Grand Prix but pre-race testing revealed his neck was not strong enough.

Wendlinger recovered from his injuries before the start of the 1995 Formula One season, where he would be driving at Sauber (now with Ford engines) alongside Frentzen. However, he performed poorly and was reluctantly replaced in the team before the Monaco Grand Prix, a year on from the accident, by Jean-Christophe Boullion. Peter Sauber then recalled Wendlinger for the final two races of the season in one last attempt to regain his pre-accident form, without success. These were his last races in Formula One.

Since then, he has competed successfully in sports cars and touring cars,[3] winning the FIA GT Championship (with Olivier Beretta) in 1999. After a spell racing for Abt-Audi in DTM in 2002 and 2003 he raced for JMB Racing in FIA GT again, driving a Maserati MC12 with Andrea Bertolini.

Since 2006, Wendlinger has been part of the JetAlliance Racing team, competing again in the FIA GT Championship. His team-mate in 2006 was Phillip Peter, and in 2007 his team-mate was Scottish driver, Ryan Sharp.

2007 Karl Wendlinger competed at the 24 Hours of Daytona with Sigal Sport team in a BMW powered Riley DP. He crashed during the night on his in lap at the end of his second stint and was sent to the hospital as a precaution. The car eventually was retired from the damage.

Wendlinger has been competing for JetAlliance Racing in 2008 alongside Ryan Sharp. They started well at the RAC Tourist Trophy round from Silverstone. Wendlinger and Sharp won the GT1 class and overall race ahead of Michael Bartels and Andrea Bertolini's Maserati MC12.

Wendlinger's helmet is yellow with 2 blue parallel lines in the middle of the helmet, a blue circle on the top and 3 red white red arrows between the parallel lines.