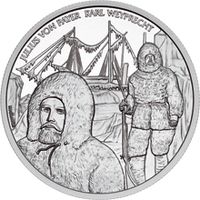 The Admiral Tegetthoff Ship and The Polar Expedition commemorative coin

Karl Weyprecht, also spelt Carl Weyprecht, (8 September 1838 – 2 March 1881[inconsistent]) was an Austro-Hungarian explorer. He was an officer (k.u.k. Linienschiffsleutnant) in the Austro-Hungarian Navy. He is most famous as an Arctic explorer, and an advocate of international cooperation for scientific polar exploration. Although he did not live to see it occur, he is associated with the organisation of the first International Polar Year.

In 1856, he joined the Austro-Hungarian Navy (Kriegsmarine) as a provisional sea cadet. He served in the Austro-Sardinian War. From 1860 to 1862, he served on the frigate Radetzky under the command of Admiral Tegetthoff. From 1863 to 1865, he was instructional officer on the training ship Hussar.

On 23 July 1865, he became known to the German geographer August Petermann at a meeting of the "Geographic Society" in Frankfurt.

He served in the 20 July 1866 sea battle at Lissa, aboard the battleship Drache.

He met Julius von Payer in 1870, and made a preliminary expedition with Payer to Novaya Zemlya in 1871.

He co-led, with Julius von Payer, the 1872-1874 Austro-Hungarian North Pole Expedition which discovered the archipelago Franz Josef Land in the Arctic Ocean. The expedition's ship Admiral Tegetthoff was abandoned in the pack ice. The expedition then moved on sledges to go further north, then to open water, where they used boats to reach the Black Cape of Novaya Zemlya and would eventually contact a Russian schooner, "Nikolaj", under Captain Feodor Veronin, and get to Vardø, Norway, where they took the mail boat south and eventually returned to Vienna. He was awarded the 1875 Royal Geographical Society's Founder's Gold Medal[1]

On 18 September 1875, he addressed the 48th Meeting of German Scientists and Physicians in Graz, Austria. He reported the "basic principles of Arctic research" and suggested that fixed Arctic observation stations should be established.[2] According to Weyprecht, it was important to organize a network of Arctic stations taking regular measurements of weather and ice conditions with identical devices and at preestablished intervals.[3]

In 1879, he presented these ideas, along with George Neumayer's to the 2nd International Congress of Meteorologists in Rome.

Karl Weyprecht died of tuberculosis in 1881.