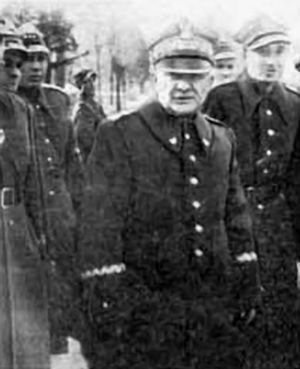 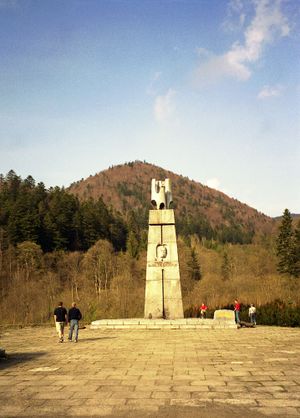 Świerczewski's monument near his place of death, in Bieszczady mountains

Born in Warsaw in Congress Poland, Karol Świerczewski grew up in a poor family and began working at age 12 in a local Warsaw factory. In 1915, at the age of 18 he was evacuated to Moscow by the Tsarist army during the First World War. In 1918 he joined the Bolshevik Party, and fought in the Russian Civil War as a soldier of the Red Army. During the Polish-Soviet War he fought on the Soviet side against the Polish Second Republic and was wounded. In 1928 on the occasion of the 10th anniversary of establishment of the Red Army he was awarded the Order of the Red Banner no. 146, his first military award.

From 1921, Świerczewski taught in the Soviet School for the Red Commissars. In 1927 he graduated from Frunze Military Academy in Moscow and worked in the Red Army General Staff.

In 1936, under the name General Walter, he went to Spain, during the Spanish Civil War, where he led the XIV International Brigade in the battle of Lopera,[1] and later the 35th International Division in the Segovia offensive,[2] and the battles of Brunete,[3] Belchite,[4] Teruel,[5] the Aragon Offensive.[6] and the Battle of the Ebro.[7]

General in the Red Army

Following the outbreak of the Second World War and the Soviet invasion of Poland, Świerczewski served as general in the Soviet Army. His Russian commanders, seeing Świerczewski's apparent incompetence and worsening alcoholism, moved him to a reserve command away from the front lines— the decision was made by General Georgi Zhukov himself.[8] The fact that Świerczewski gave most of his orders under influence of alcohol, had tragic consequences for his soldiers, described in Zygmunt Berling's book Wspomnienia (Memories). In 1943 he became one of the generals charged with the creation of the Soviet-controlled Polish Armed Forces in the East, the 1st Polish Army. His alcoholism and disregard for the life and health of his soldiers stirred conflict with Zygmunt Berling, and led to his removal from the command on several occasions. Świerczewski's alcoholism-related orders gained criticism from other Polish generals as well, including General Aleksander Waszkiewicz.[9]

In 1944 he became one of the leaders of the Polish Workers' Party and the government of People's Republic of Poland.[10] In the winter of 1944 and the spring of 1945 he led the Polish Second Army during the fighting for western Poland and the Battle of Berlin. His leadership in the Battle of Bautzen (Budziszyn) has been severely criticized by modern historians, and he is held responsible for the Second Army's very heavy casualties in that engagement.[11] While commanding, he might have been drunk, and was temporarily relieved of his command.[11][12] However, due to important backing in the Soviet political apparatus (Main Intelligence Directorate (Russia) or NKVD), not only did he retain his command, but his mistakes were hushed up, and after the war he was gloried as a hero.[11]

In February 1946 Świerczewski became the Deputy Defense Minister of Poland. He was involved in the persecution of the anti-communist underground movement in Poland, and signed many death sentences, while establishing the communist regime.[13] 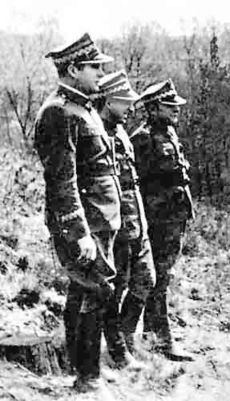 Świerczewski was heavily wounded in a skirmish near Baligród in March 1947 while driving in a car without escort for the inspection of Polish troops fighting Ukrainian partisans. He was ambushed by a unit of Ukrainian Insurgent Army, and died from his wounds within hours. There were several conspiracy theories claiming, that the ambush has been arranged by the Soviet intelligence due to his insubordination.[10] According to one theory, the information about the general's arrival to the area was passed to Ukrainians by the NKVD and his escort prevented from leaving by mechanical problems with both trucks transporting soldiers. Most other hypothesis also suggest Soviet or even direct Stalin's orders.[10] The general, a Pole by ethnicity but essentially a Soviet officer with a heroic record from the Spanish Civil War and a long Red Army war record, had been previously placed lower in the command structure than prewar Polish officers Berling and Rola-Żymierski.

For several years after the Second World War ended, the Ukrainian Nationalist insurgency led mainly by the Ukrainian Insurgent Army continued fighting in the South-East of Poland. This war largely supported by the local Ukrainian part of the population, continued until 1949, with some sporadic fights taking place as late as 1956. Świerczewski's death was used as direct cause for the forcible expulsion of the Ukrainian civilian population in Operation Vistula from the territories in the South Eastern part of the post-war Poland to the "Recovered Territories" (Ziemie Odzyskane, areas of western Poland gained after the war). In the socialist Poland many myths were created around Karol Świerczewski ("The General of Three Armies"), but details of his life and especially his service in the Red Army during Polish-Soviet War as well as the details of his Spanish War record were never mentioned. 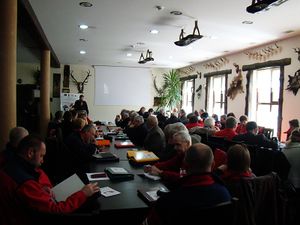 In People's Republic of Poland, the Polish communist propaganda made him into a hero, and many controversial aspects of his life such as alcohol abuse and his incompetence during the Battle of Bautzen, as well as postwar Stalinist crimes were hushed up.[11] In 1953, a Polish two-part film depicting the life of Świerczewski, Żołnierz zwycięstwa (A Soldier of Victory), was released. Józef Wyszomirski portrayed the General.[14]

During the years 1975-1996 Karol Świerczewski's picture was on a 50 złoty banknote.[15] After 1989, as Poland regained independence from Soviet rule with the end of the Warsaw Pact and the coming to power of Solidarity, many of his monuments were removed and streets renamed because of his role in implementing the communist regime in Poland.

On May 21, 2003, the Polish organization of former veterans and independence fighters applied to the Institute of National Remembrance (IPN) to investigate crimes against the Polish nation committed by Karol Świerczewski. In a letter, they recall that he was "one of the people who consciously worked towards [the] enslavement of Polish nation, through enforced communist regime that was [a] vassal towards Moscow". Among crimes that are not subject to expiry and should be investigated by the IPN are 29 death sentences on Polish soldiers and officers, which were signed by Świerczewski during his command of the Soviet-controlled 2nd Polish Army.[16]

While being an unwilling photography subject himself, General Walter was a keen amateur photographer.[17] His daughter donated 333 of his photographs to the Asociación de Amigos de las Brigadas Internacionales in Albacete, Spain, to form a permanent part of their archive.[18]