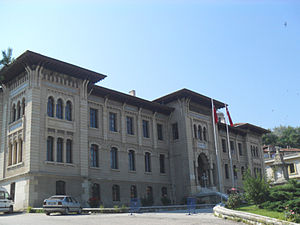 The city is believed to have been founded in the 18th century BC. The town was known as Timonion (Τιμόνιον in Greek) during the Roman period.

The change of name of the town dates to the 10th century AD. Manuel Erotikos Komnenos, a Thracian soldier who became a prominent general and the father of the Byzantine emperor Isaac I Komnenos, was given lands around Kastamonu by Emperor Basil II and built a fortress there named Kastra Komnenon (Κάστρα Κομνηνών). Manuel came to the notice of Basil II because of his defence, in 978, of Nicaea against the rebel Bardas Skleros.[7] The name Kastra Komnenon was later Turcified to Kastamoni and Kastamonu.

The Dress Code Revolution started at Kastamonu by Atatürk on August 23, 1925. Atatürk made his historical speech concerning about the "Hat and Dress Revolution" in 1925 at his visit to Kastamonu at Cumhuriyet Halk Partisi building.[8] The building is now used as Archeological Museum. The materials used by Atatürk in his Kastamonu visit are also exhibited in the museum.

In the early 20th century, nickel was being mined in the area around Kastamonu.[9]

Kastamonu is home to Kastamonu University, which was established in 2006 by incorporating existing colleges, schools, and institutes that were previously under Ankara University and Gazi University.

Notable high schools in Kastamonu are:

Kastamonu has an oceanic climate (Köppen : Cfb) with cold winters and warm summers. The average annual precipitation is evenly distributed throughout the year, with spring being the wettest season.