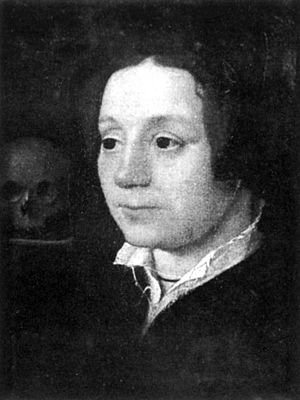 portrait of "Kat" Ashley by an unknown artist. Collection of Lord Hastings

Katherine Ashley (or Astley) née Champernowne (circa 1502–1565) was governess to Elizabeth I and was a close friend in later life, known to the Queen as "Kat," and it is by the name "Kat Ashley" that she is generally known to history. She should not be confused with her niece Catherine Champernowne, mother of Sir Walter Raleigh and Sir Humphrey Gilbert. 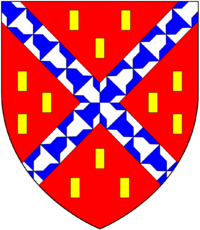 Arms of Champernowne: Gules, a saltire vair between twelve billets or

Katherine Champernowne’s parentage is not known for certain,[1] but she was probably the daughter of Sir John Champernowne (1458–1503) of Dartington in Devon, by his wife Margaret Courtenay (c.1459-1504), a daughter of Sir Philip I Courtenay (died 1488) of Molland, Devon, Sheriff of Devon in 1470, the second son of Sir Philip II Courtenay (1404–1463) of Powderham by his wife Elizabeth Hungerford.[2] The name derives from the village of Cambernon in Normandy, France, the former feudal holding of the de Cambernon family. Kat's niece was Joan Champernowne, who married Anthony Denny, a trusted servant of King Henry VIII.

After Edward VI's birth, Elizabeth lost her nurse, Lady Bryan, who was transferred to the young Prince's household. She was placed in the care of Blanche Herbert, Lady Troy who remained Elizabeth's Lady Mistress until she retired in late 1545 or early 1546; Elizabeth's household accounts from Hatfield show she sent Lady Troy a pension.[3] Katherine Champernowne was appointed as a waiting gentlewoman to the then Lady Elizabeth in July 1536. In 1537, when Elizabeth was four, Katherine became her governess, and was known to her as "Kat."

Evidently, Champernowne had been well educated for she taught Elizabeth astronomy, geography, history, mathematics, French, Flemish, Italian and Spanish. In addition, she taught Elizabeth pursuits such as needlework, embroidery, dancing, riding, and deportment. By the age of six, Elizabeth was able to sew a beautiful cambric shirt as a gift for Edward VI. Sources state that Kat accustomed Elizabeth to the "elaborate code of politeness and subservience to her elders". Elizabeth herself praised Kat’s early devotion to her studies by stating that Kat took "great labour and pain in bringing of me up in learning and honesty".

In 1545 Katherine married Sir John Ashley, Princess Elizabeth's senior gentleman attendant. Sir John Ashley was a cousin of Elizabeth's mother, Anne Boleyn. Katherine was over 40 years old at this date which heavily implies John Champernowne of Dartington is her father as Sir Philip's wife Catherine Carew was only 10 in 1505.

In 1543, Henry VIII had married Catherine Parr. Parr gave Elizabeth a more stable family life and brought Elizabeth to Court. However Henry died in 1547 and was succeeded by his son, Edward VI. Edward's uncles, Edward Seymour and Thomas Seymour tried to get control of him. Shortly after Henry VIII died, Thomas Seymour investigated whether he could be permitted to marry either the Lady Mary or Elizabeth; he was refused. Seymour immediately began courting Catherine Parr. (They had been romantically linked before she became Queen). In her early 30s and still childless, Parr agreed to marry Seymour almost at once, only two months after Henry's death. Seymour and Parr were able to secure royal approval and lived in Chelsea with Kat and the young Elizabeth.

When Thomas Seymour began a flirtation with the 14-year-old Elizabeth, Kat Ashley first thought this amusing. However he entered Elizabeth's bedroom in the morning in his nightshirt and tried to tickle her while she was still in bed. Kat, who may herself have been somewhat infatuated with Seymour,[4] became concerned and advised Catherine Parr, who was later accused of taking part in holding down the Lady Elizabeth while Seymour slashed her gown "into a thousand pieces."[5] Eventually there was a major incident in which Kat said that Queen Catherine had caught Elizabeth in Seymour's arms.[6] Elizabeth was lectured about the need to protect her reputation. However, gossip spread.

The rumors about Thomas Seymour's flirtation with Elizabeth emerged in 1548 as his other political maneuvers were revealed. On 21 January 1549, Kat Ashley was arrested and taken to the Tower, for possible involvement in Seymour's activities. She told her story and was found to have done nothing treasonous and was released thirteen days before Seymour's execution. Despite detailed questioning, Katherine did not implicate Elizabeth in Seymour's schemes. Blanche Parry, second in the household, was Elizabeth's Chief Gentlewoman while Kat was in prison.

By August 1549, Kat had returned to Hatfield and stayed with Elizabeth until Elizabeth was imprisoned in the Tower by Mary I in 1554. Kat was allowed to rejoin Elizabeth in October 1555, but she was arrested in May 1556 following the discovery of seditious books. Kat spent three months in Fleet Prison and after her release, she was forbidden to see Elizabeth again.

When Mary I died in 1558, the order was revoked, and Kat was made First Lady of the Bedchamber. She became influential as a source of information for the Queen and as a means of asking favors of the Queen. She died in the summer of 1565 to Elizabeth's great distress. Blanche Parry then became Chief Gentlewoman of the Privy Chamber.