Kata (型 or 形, literally: "form"?), a Japanese word, are the detailed choreographed patterns of movements practised either solo or in pairs. The term form is used for the corresponding concept in non-Japanese martial arts in general.[1]

Kata are used in many traditional Japanese arts such as theater forms like kabuki and schools of tea ceremony (chado), but are most commonly known for the presence in the martial arts. Kata are used by most Japanese and Okinawan martial arts, such as aikido, judo, kendo and karate.

Kata originally were teaching and training methods by which successful combat techniques were preserved and passed on. Practicing kata allowed a company of persons to engage in a struggle using a systematic approach, rather than as individuals in a disorderly manner.[1]

The basic goal of kata is to preserve and transmit proven techniques and to practice self-defence. By practicing in a repetitive manner the learner develops the ability to execute those techniques and movements in a natural, reflex-like manner. Systematic practice does not mean permanently rigid. The goal is to internalize the movements and techniques of a kata so they can be executed and adapted under different circumstances, without thought or hesitation. A novice’s actions will look uneven and difficult, while a master’s appear simple and smooth.[1]

Kata is a loanword in English[citation needed], from the 1950s in reference to the judo kata due to Jigoro Kano, and from the 1970s also of karate kata; but the word has come to be used as a generic term for "forms" in martial arts in general, or even figuratively applied to other fields.[citation needed]

In kenjutsu, paired kata at the beginners level can appear to be stilted.[citation needed] At higher levels serious injury is prevented only by a high sensitivity of both participants to important concepts being taught and trained for.[citation needed] These include timing and distance, with the kata practiced at high speed. This adjustability of kata training is found in other Japanese arts with roles of attacker and defender often interchanging within the sequence.[citation needed]

Many martial arts use kata for public demonstrations and in competitions, awarding points for such aspects of technique as style, balance, timing, and verisimilitude (appearance of being real).[citation needed] 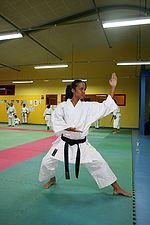 The most popular image associated with kata is that of a karate practitioner performing a series of punches and kicks in the air. The kata are executed as a specified series of approximately 20 to 70 moves, generally with stepping and turning, while attempting to maintain perfect form. There are perhaps 100 kata across the various forms of karate, each with many minor variations. The number of moves in a kata may be referred to in the name of the kata, e.g., Gojū Shiho, which means "54 steps." The number of moves may also have links with Buddhist spirituality. The number 108 is significant in Buddhism & Hinduism, signifying the 108 ways the mind can behave (Upanishads) and kata with 54, 36, or 27 moves (divisors of 108) are common. The practitioner is generally counselled to visualize the enemy attacks, and his responses, as actually occurring, and karateka are often told to "read" a kata, to explain the imagined events. Kata can contain techniques beyond the superficially obvious ones. The study of the meaning of the movements is referred to as the bunkai, meaning analysis, of the kata.[3]

One explanation of the use of kata is as a reference guide for a set of moves. Not to be used following that "set" pattern but to keep the movements "filed". After learning these kata, this set of learned skills can then be used in a sparring scenario (particularly without points). The main objective here is to try out different combinations of techniques in a safe, practice environment to ultimately find out how to defeat your opponent.[citation needed]

Judo has several kata, mostly created in the late 19th century by Kano Jigoro, the founder of judo. The judo kata involve two participants. Judo kata preserve a number of techniques that are not permitted in competition or in randori, including punches, kicks, and the use of the katana and other weapons. The study of kata is usually begun typically at around the green belt level. The most commonly studied judo kata is Nage-no-kata, which consists of fifteen throwing techniques. The Katame-no-kata is composed of pinning techniques, chokes, and joint locks. Kime-no-kata is a long kata consisting of self-defense techniques against both unarmed attacks, and attacks with swords and knives.[4][5] 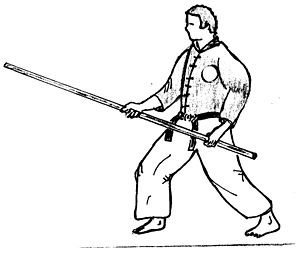 Aka with stick (4 Winds)

While the Japanese term is most well known in the English language, forms are by no means exclusive to Japan. They have been recorded in China as early as the Tang dynasty, and are referred to in Mandarin as taolu.[citation needed]

South and Southeast Asian martial arts incorporate both preset and freestyle forms. In silat these are referred to as jurus and tari respectively. Malay folklore credits the introduction of forms to the Buddhist monk Bodhidharma.[6]

In Korean martial arts such as taekwondo and Tangsudo, the word hyung or hyeong is usually employed, though in some cases other words are used.[citation needed] The International Taekwon-Do Federation uses the word tul, while the World Taekwondo Federation uses the word poomsae or simply the English translations "pattern" or "form."[citation needed] Taekwondo patterns have multiple variations including Palgwe and the more popular Taeguk forms used by the WTF. Forms are included in certain taekwondo competitions and are a key element of gradings.[citation needed]

In Sanskrit, forms are known either as yudhan (combat form) or pentra (tactical deployment).[citation needed] Other Asian martial arts refer to forms by various terms specific to their respective languages, such as the Burmese word aka, the Vietnamese quyen and the Kashmiri khawankay.[citation needed]

In the Historical European martial arts and their modern reconstructions, forms are referred to as plays, drills or flourishes.[citation needed]

For other uses, see Kata (disambiguation).

More recently kata has come to be used in English in a more general or figurative sense, referring to any basic form, routine, or pattern of behavior that is practiced to various levels of mastery.[7]

In Japanese language kata (though written as 方) is a frequently-used suffix meaning “way of doing,” with emphasis on the form and order of the process. Other meanings are “training method” and “formal exercise.” The goal of a painter’s practicing, for example, is to merge his consciousness with his brush; the potter’s with his clay; the garden designer’s with the materials of the garden. Once such mastery is achieved, the theory goes, the doing of a thing perfectly is as easy as thinking it.[8]

Kata is a term used by some programmers in the Software Craftsmanship[9] movement. Computer programmers who call themselves "Software Craftsmen"[10] will write 'Kata'[11] - small snippets of code that they write in one sitting, sometimes repeatedly,[12] often daily, in order to build muscle memory and practise their craft, much like a soldier, a musician, a doctor or a dancer.[13]

One of the things that characterize an organization’s culture is its kata – its routines of thinking and practice.[14] Edgar Schein suggests an organization's culture helps it cope with its environment,[15] and one meaning of kata is, "a way to keep two things in sync or harmony with one another." A task for leaders and managers is to create and maintain the organizational culture through consistent role modeling, teaching, and coaching, which is in many ways analogous to how kata are taught in the martial arts.