Katarzyna Kozyra (born 1963) is a Polish video artist. She finished German studies in the Warsaw University (1985–1988). She graduated in 1993 from the Academy of Fine Arts in Warsaw and Hochshule für Graphik und Buchkunst in Leipzig and received a Paszport Polityki award in 1997. She has exhibited internationally since 1997, at venues including Brown University and Carnegie International in the U.S.

Her art was involved in a 1999 censorship incident in Poland. Her photo portrait of Slawomir Belina in a Warsaw exhibition in 2000 was also controversial for its alleged eroticism, as his anus was in the centre of the composition.[1][2]

Since 2003 Kozyra has received a DAAD grant, and has developed a new form of performance involving operatic singing.[3]

In 1999 represented Poland in the 48th Venice_Biennale , where she got commendation for video installation "Men’s Bathhouse". In September 2011 she received the Polish Ministry of Culture and National Heritage grant. 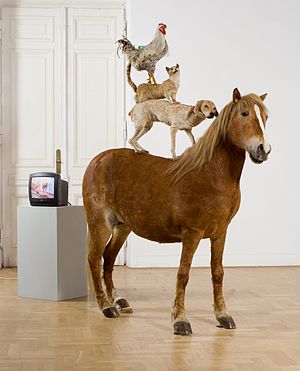 Pyramid of Animals was her 1993 graduate work, and became a sensation in Poland at the time. The piece consisted of the dissected animal bodies of a horse, dog, cat, and rooster. While quoting a theme from Grimm Brother’s fairy tale "The Bremen Town Musicians", the Pyramid was supposed to concern human involvement in industrial animal killing procedure. It was also said that this piece wasn't just, "a work about animals, but a work about death, about killing, and their significance in present day culture".[4] Kozyra became known as a controversial artist because of the notoriety with the installation, but also because of her other works: "Blood relationship" 1995, "Olympia" 1996, "Lady’s bathhouse" 1997, and "Man’s bathhouse" 1999).

"Olympia" (a series of photos and a video) was a collection of Kozyra’s fight with cancer. The assumption was an attempt to restore dignity to an ailing, moribund body; polemic with the official image of a healthy, strong, and beautiful body. It was a protest against belief, that body illnesses or senility, doom its owner to social invisibility. The first photography is Kozyra’s interpretation of Édouard Manet’s “Olympia” (1863). In this painting, the nude female body had been “decorated” with flowers of orchid and luxurious jewellery of an oriental shawl. The most scandalous element is not presenting the female nude as itself, but presenting the reality of life, illness, and death; that the female body isn't just a thing of beauty and admiration for men. Kozyra wanted to achieve this message by lying in the same pose as Olympia, but her body does not look the same. It is really pale, smooth, and it is obvious that it is not healthy. She is completely bald (reference to chemotherapy) which makes her entirely not as appealing. The second image depicts Kozyra naked on a hospital bed– she is completely hairless and the effects of the chemotherapy are obvious. The effect on the audience is so strong that we can connect with her suffering. The third image shows an old woman sitting on a bed – she is alone. Her body is flabby and she has really saggy breasts. Her face is wrinkled all over and it seems that all her teeth are gone. At the same time she looks really calm – like she would reconcile with her fate. The women in all the photographs have one thing in common – black ribbon wrapped around the neck to symbolizes mourning.

"Women's Bathhouse" considers a similar subject matter. Kozyra’s intention was to show how women really appear in situation where nobody is looking and when they don’t need to follow beauty canons. Kozyra was able to document this natural behavior by shooting her work with a hidden video camera. By doing this, she presented the female body as is and encouraged the viewers to go against their previous ideals and standards of beauty.[5] Additionally, it was an allusion to the history of art, which played significant role in formation of this canon (Jean Ingres’s paintings of lady’s bathhouses). "Man’s Bathhouse" was a confrontation and continuation. Kozyra went into man’s bathhouse with fake penis attached to her and a towel hung on her shoulders covering the breasts. Surprisingly she found out, that men even when being alone they still focus on their appearance, peer at each other, compare. Mystification was not revealed.

Anda Rottenberg, Director of Galeria Zacheta in Warsaw where Kozyra first showed "Bath house" in 1997 and who also purchased the work, sparked off controversy by writing to Art Monthly in October 1998 and claiming that Kozyra's "Bath house" and artist Tacita Dean's 1998 "Gellert" were of the same subject: the most famous bath house in Budapest. Freely admitting that controversy helps in the promotion of a work, "Controversy around this work was in fact a very stimulating factor and now as the months passed Bath house has come to be regarded as classic", Rottenberg found the coincidence "indeed amazing". However, the works differ completely. Whereas Kozyra used hidden cameras intending to reveal the bathing women's natural behaviour as well as challenging normal considerations of privacy, and is a multi-screen video work (see letter again), Dean had permission from the bath workers and her single screen film is concerned with the healing sulphurous waters of the baths (see Colin Gleadell, The Daily Telegraph, 1 February 2001).