Kate Chopin, born Katherine O'Flaherty (February 8, 1850 – August 22, 1904), was a U.S. author of short stories and novels. She is now considered by some to have been a forerunner of the feminist authors of the 20th century of Southern or Catholic background, such as Zelda Fitzgerald.

From 1892 to 1895, she wrote short stories for both children and adults that were published in such magazines as Atlantic Monthly, Vogue, The Century Magazine, and The Youth's Companion. Her major works were two short story collections, Bayou Folk (1894) and A Night in Acadie (1897). Her important short stories included "Désirée’s Baby," a tale of miscegenation in antebellum Louisiana (published in 1893),[1] "The Story of an Hour" (1894),[2] and "The Storm"(1898).[1] "The Storm" is a sequel to "The 'Cadian Ball," which appeared in her first collection of short stories, Bayou Folk.[1] Chopin also wrote two novels: At Fault (1890) and The Awakening (1899), which are set in New Orleans and Grand Isle, respectively. The characters in her stories are usually inhabitants of Louisiana. Many of her works are set in Natchitoches in north central Louisiana.

Within a decade of her death, Chopin was widely recognized as one of the leading writers of her time.[3] In 1915, Fred Lewis Pattee wrote, "some of [Chopin's] work is equal to the best that has been produced in France or even in America. [She displayed] what may be described as a native aptitude for narration amounting almost to genius."[3] 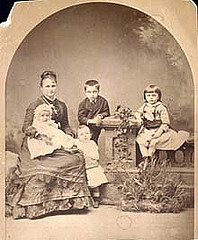 Chopin and her children in New Orleans, 1877

Chopin was born Katherine O'Flaherty in St. Louis, Missouri. Her father, Thomas O'Flaherty, was a successful businessman who had emigrated from Galway, Ireland. Her mother, Eliza Faris, was a well-connected member of the French community in St. Louis and herself the daughter of Athénaïse Charleville, who was of French Canadian descent. Some of Chopin's ancestors were among the first European inhabitants of Dauphin Island, Alabama. She was the third of five children, but her sisters died in infancy and her half-brothers (from her father's first marriage) died in their early twenties. After her father's death in 1855, Chopin developed a close relationship with her mother, grandmother, and great-grandmother. She also became an avid reader of fairy tales, poetry, and religious allegories, as well as classic and contemporary novels. 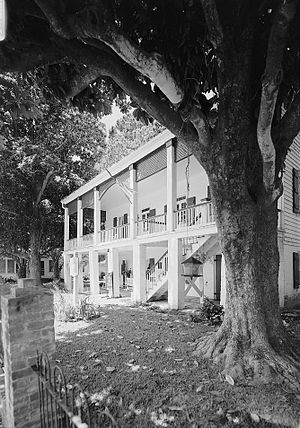 In St. Louis, Missouri, on 8 June 1870,[4] she married Oscar Chopin and settled in New Orleans. Chopin had six children between 1871 and 1879 –in order of birth, Jean Baptiste, Oscar Charles, George Francis, Frederick, Felix Andrew, and Lélia (baptized Marie Laïza).[5] In 1879, Oscar Chopin's cotton brokerage failed, and the family moved to Cloutierville in south Natchitoches Parish to manage several small plantations and a general store. They became active in the community, and Chopin absorbed much material for her future writing, especially regarding the Creole culture of the area. Their home at 243 Highway 495 (built by Alexis Cloutier in the early part of the century) was a national historic landmark and the home of the Bayou Folk Museum. On October 1, 2008, the house was destroyed by a fire, with little left but the chimney.[6]

When Oscar Chopin died in 1882, he left Kate with $42,000 in debt (approximately $420,000 in 2009 money). According to Emily Toth, "for a while the widow Kate ran his [Oscar's] business and flirted outrageously with local men; (she even engaged in a relationship with a married farmer)."[7]

Although Chopin made an honest effort to keep her late husband's plantation and general store alive, two years later she sold her Louisiana business. Her mother implored her to move back to St. Louis, so Chopin did, and the children gradually settled into life in St. Louis, where finances were no longer a concern. The following year, Chopin's mother died.[8]

Chopin now found herself in a state of depression after the loss of both her husband and her mother. Her obstetrician and family friend, Dr. Frederick Kolbenheyer, felt that writing would be a source of therapeutic healing for Kate during her hard times. He understood that writing could be a focus for her extraordinary energy, as well as a source of income.[9]

By the early 1890s, Kate Chopin began writing short stories, articles, and translations which appeared in periodicals, including the St. Louis Post-Dispatch. She was quite successful and placed many of her publications in literary magazines. However, she became known only as a regional local color writer and her literary qualities were overlooked.[10]

In 1899, her second novel, The Awakening, was published, and garnered a significant amount of negative press because it promoted values that conflicted with standards of acceptable ladylike behavior. Some of the most frequently referenced offensive ideas were those regarding female sexuality, motherhood, and marital infidelity.[11] Although the novel received much negative press, some newspapers regarded it favorably.[12] This, her best-known work, is the story of a woman trapped in the confines of an oppressive society. Out of print for several decades, it is now widely available and critically acclaimed for its writing quality and importance as an early feminist work in the South.[13]

Some of her writings, such as The Awakening, were too far ahead of their time and therefore not socially embraced. After almost 12 years in the public eye of the literary world and shattered by the lack of acceptance, Chopin, deeply discouraged by the criticism, turned to short story writing.[14] In 1900, she wrote "The Gentleman from New Orleans", and that same year she was listed in the first edition of Marquis Who's Who. However, she never made much money from her writing, and depended on her investments in Louisiana and St. Louis to sustain her.[15] 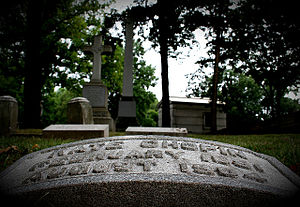 While visiting the St. Louis World's Fair on August 20, 1904, Chopin suffered a brain hemorrhage and died two days later, at the age of 54. She was interred in Calvary Cemetery in St. Louis.[16]

Kate Chopin had different lifestyles throughout her life. These lifestyles provided her with insights and understanding that permitted her to analyze late 19th-century American society. As a result of her childhood upbringing by women with ancestry descending from both Irish and French family, and life in the Cajun and Creole cultures after she joined her husband in Louisiana, many of her stories and sketches were about her life in Louisiana. They incorporated her unusual portrayals of women as their own individuals with wants and needs.[17]

Chopin's writing style was influenced by her admiration of Guy de Maupassant:

...I read his stories and marveled at them. Here was life, not fiction; for where were the plots, the old fashioned mechanism and stage trapping that in a vague, unthinkable way I had fancied were essential to the art of story making. Here was a man who had escaped from tradition and authority, who had entered into himself and looked out upon life through his own being and with his own eyes; and who, in a direct and simple way, told us what he saw...[18]

Chopin went beyond Maupassant's technique and style to give her writing a flavor of its own. She had an ability to perceive life and put it down on paper creatively. She invested substantial concentration and emphasis on women's lives and their continual struggles to create an identity of their own within the Southern society of the late nineteenth century. In "The Story of an Hour", Mrs. Mallard allows herself time to reflect upon learning of her husband's death. Instead of dreading the lonely years ahead, she stumbles upon another realization altogether.

"She knew that she would weep again when she saw the kind, tender hands folded in death; the face that had never looked save with love upon her, fixed and gray and dead. But she saw beyond that bitter moment a long procession of years to come that would belong to her absolutely. And she opened and spread her arms out to them in welcome".[2]

Not many writers during the mid- to late 19th century were bold enough to address subjects that Chopin willingly took on. Although Elizabeth Fox-Genovese, of Emory University, claims "Kate was neither a feminist nor a suffragist, she said so. She was nonetheless a woman who took women extremely seriously. She never doubted women's ability to be strong".[19] Kate Chopin's sympathies lay with the individual in the context of his and her personal life and society.

Through her stories, Kate Chopin wrote her autobiography and documented her surroundings; she lived in a time when her surroundings included the abolitionist movements and the emergence of feminism. Her ideas and descriptions were not true word for word, yet there was an element of nonfiction lingering throughout each story.[20]

Chopin took strong interest in her surroundings and put many of her observations to words. Jane Le Marquand saw Chopin's writings as a new feminist voice, while other intellectuals recognize it as the voice of an individual who happens to be a woman. Marquand writes, "Chopin undermines patriarchy by endowing the Other, the woman, with an individual identity and a sense of self, a sense of self to which the letters she leaves behind give voice. The 'official' version of her life, that constructed by the men around her, is challenged and overthrown by the woman of the story."[18]

Chopin may have been using her creative writing skills to express a point of view regarding her belief in the strength of women. The idea of creative nonfiction might be seen as relevant in this case. In order for a story to be autobiographical, or even biographical, Marquand writes, there has to be a nonfictional element, which more often than not exaggerates the truth to spark and hold interest for the readers. Kate Chopin may have felt just as surprised by the contemporary characterization of her work as feminist as she had been in her own time by the stamp of immorality. Critics tend to regard writers as individuals with larger points of view addressed to factions in society.[18]

"Désirée's Baby" focuses on Kate Chopin's experience with the Creoles of [of color] Louisiana, where the idea of slavery and the atmosphere of plantation life were a reality. The possibility of one's having a mixed background was not unheard of. Mulattos, those with both black and white backgrounds, were common in the Southern part of the nation. The issue of racism that the story brings up was an indispensable truth in 19th century America; the dark reality of racism is on full, raw display in this story because Chopin was not afraid to address such issues that were often suppressed and intentionally ignored in order to avoid bitter actuality, as Armand does when he refuses to believe that he is of black descent. The definition of great fiction is that which has the only true subject of "human existence in its subtle, complex, true meaning, stripped of the view with which ethical and conventional standards have draped it".[21]

In the penultimate episode of the first season of HBO's Treme, Creighton (played by John Goodman) assigns Kate Chopin's The Awakening to his freshmen and warns them:

"I want you to take your time with it," he cautions. "Pay attention to the language itself. The ideas. Don't think in terms of a beginning and an end. Because unlike some plot-driven entertainments, there is no closure in real life. Not really." [23] 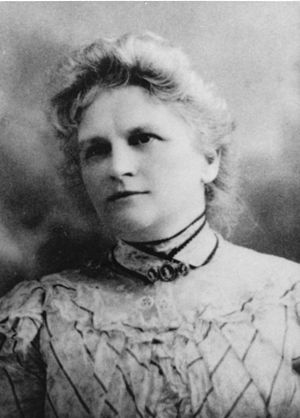