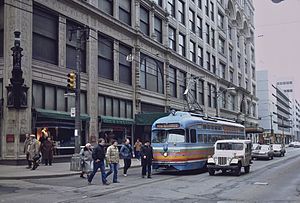 The flagship store in downtown Pittsburgh in 1984, with a trolley car stopping in front

Kaufmann's was a local department store that originated in Pittsburgh, Pennsylvania. It was owned in the early 20th century by Edgar J. Kaufmann, patron of 'Fallingwater'. In the post-war years, the store became a regional chain in the eastern United States, and was last owned by Federated Department Stores. At the height of its existence, it had some 59 stores in 5 states. Formerly part of May Department Stores prior to that company's acquisition by Federated on August 30, 2005, Kaufmann's operated as part of the Filene's organization in Boston, Massachusetts.[1] On February 1, 2006, the Filene's/Kaufmann's organization was dissolved and the management of its stores was assumed by Macy's East and the new Macy's Midwest. On September 9, 2006, Macy's retired the Kaufmann's name as Federated Department Stores converted the former May Company brands to its masthead.[2] On August 12, 2006 a sign was installed on the corner of Smithfield Street and Fifth Avenue outside the original store in Downtown Pittsburgh reading Kaufmann Way.[3]

For a time Kaufmann's was the most prominent of seven department stores in downtown Pittsburgh which included: Kaufmann & Baer founded by cousins of the original 'Kaufmann's' founders; Gimbel Brothers; Horne's; Boggs & Buhl; Frank & Seder's, Rosenbaum's, and Boggs & Buhl of Allegheny Center.[4]

Kaufmann's was founded in Pittsburgh in 1871 by Jacob and Isaac Kaufmann as a small South Side men's store.[5][4] In 1877, the brothers moved downtown to a location that became known as The Big Store.[6] In the first half of the 20th century, the store was owned by Edgar J. Kaufmann.

With Edgar J. Kaufmann remaining as president, the Kaufmann's chain was acquired by the California-based May Company Department Stores in 1946. The Kaufmann's division operated stores in Pennsylvania, New York, Ohio and West Virginia.[7]

The Kaufmann's chain dominated its local region, absorbing several other department stores including Strouss (1986) based in Youngstown, Ohio; Sibley's (1991) based in Rochester, New York (which had merged with Hengerer's (1981) of Buffalo, New York); May Company Ohio (1992) based in Cleveland, Ohio (which had merged with O'Neil's (1989) in Akron, Ohio); and in 1995 the remnants of McCurdy's stores of Rochester and Hess's of Allentown, Pennsylvania.[citation needed]

Ironically, Gimbel Brothers history in Pittsburgh had originated with its purchase of the 'Kaufmann & Baer' department store in 1926, founded by a rival faction of the Kaufmann family.[4]

In 1970, the tobacco comglomerate BATUS purchased the entire Gimbels chain. In 1986, after years of declining sales, BATUS announced that Gimbels was for sale. Unable to find a buyer for the entire chain, BATUS closed the unprofitable Gimbels-Pittsburgh division, closing all of its locations and selling the properties, except for some of the high profit Gimbels locations in shopping malls rebranded as Kaufmann's stores.[4]

In October 1986, May Company acquired Joseph Horne Co. (Horne's), as part of its merger with Associated Dry Goods. Due to anti-trust concerns and legal action by the City of Pittsburgh, it promptly sold Horne's in December 1986 to a local investor group. After several years of private ownership, Dillard's Department Stores announced it would buy the Horne's chain to combine it with the Dillard/DeBartolo co-owned Higbee's stores based in Cleveland, however the deal collapsed. The Joseph Horne Co. was sold in parts, with Dillard's acquiring its five Ohio stores in 1992 and Federated Department Stores's Lazarus Department Stores division acquiring Kaufmann's remaining nine Pennsylvania stores in 1995. Federated eventually merged all its divisions (including former 'Horne's/Lazarus store locations) into the Macy's stores division.[4]

When Kaufmann's acquired many former Gimbels locations, it converted Gimbels' Auto Centers into Goodyear Auto Service Centers at suburban and mall locations in 1987 under "Kaufmann's Auto Centers by Goodyear".

Into the 21st century

In 2002, the Kaufmann's stores' Pittsburgh business headquarters closed, and its back-office operations were consolidated into those of Filene's Department Stores in Boston.[8]

The flagship store in downtown Pittsburgh was built in 1887 at the corner of Fifth Avenue and Smithfield Street and became known as The Big Store. It has undergone several expansions and renovations since. Architect Charles Bickel designed the H. and I Kaufman and I. Kaufman stores in 1898. In 1913, the architects Janssen & Abbott designed a larger white terra cotta-sheathed addition in a Neoclassical revival style structure with Renaissance Revival style details and a large ornamental public clock at the corner. In the late 1920s, Edgar G. Kaufmann commissioned a redesign of the main floor of the department store. Local architect Benno Janssen and his partner William Cocken rose to the challenge and created an art-deco masterpiece. It is remembered for its striking black Carrara glass columns, bronze metalwork, terrazzo floors, and a million dollars' worth of new elevators. The building was the largest department store in Pittsburgh with twelve retail floors totaling 750,000 square feet (70,000 m2), and spanning an entire downtown city block who commissioned Frank Lloyd Wright to design his executive offices on the top floor of The Big Store, as well as his country house 'Fallingwater' (1934) at the company's Bear Run retreat in Pennsylvania. The office interior was saved and reinstalled in the Victoria and Albert Museum in London.[9] He also commissioned renowned architect Richard Neutra to design the iconic desert Kaufmann House (1946) in Palm Springs, California. Kaufmann's started several holiday traditions that were carried on after it was taken over such as animated Christmas windows and Santa Land. Although Macy's has taken over the building, it continued its policy of leaving the original brass plaques of flagship department stores on their buildings. Currently, 13 Kaufmann's plaques still grace the building. As of 2009, Macy's consolidated from 12 floors to 6.

On July 13, 2015, Macy's announced it sold the downtown property to Core Reality and closed the store after 128 years on September 20, 2015. Core Reality plans to redevelop the building for mixed use.[10]

Meet Me Under Kaufmann's Clock 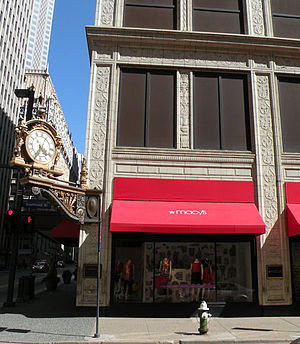 Kaufmann's flagship Big Store had a landmark outdoor clock at Fifth Avenue and Smithfield Street since the building's construction. The original clock was installed in 1887 and was free-standing with four dials.[11][12][13] It immediately became a popular downtown meeting place, with the oft-used phrase "Meet me under Kaufmann's clock." With the expansion of the store in 1913, the current clock was installed.[14] The clock is a Pittsburgh icon, and is often featured in visual materials representing and marketing the city. Both the Kaufmann's flagship building and the clock are designated as Pittsburgh Historical Landmarks. Upon announcing the 2006 retirement of the Kaufmann's name and the store's rebranding as Macy's, it distributed tote bags printed with the clock image and its phrase "Meet me under the Kaufmann's clock" to honor the store's 135-year history. Also in 2006, USA Today ran an article about the regional chains merging into Macy's which featured memories from Pittsburghers about the store and the clock: "As girls in their best dresses and Mary Jane shoes, they rode streetcars downtown to the 11-story Kaufmann's department store here. Jean Wenner, 81 [in 2006], and her friends grew up on Kaufmann's, meeting under the store's ornate clock, lunching at the Tic Toc restaurant and bringing their own children to the Secret Santa."[15]

As part of the political fireworks between City Councilman "Jeep" DePasquale and Councilwoman Michelle Madoff in the 1980s, Madoff took up DePasquale's dismissal of a tax she proposed when he joked at a council meeting that he would "kiss [her] you-know-what" if it ever raised just $20. After the tax raised $1,542.15 ($3,781 today) in a short time, she challenged DePasquale to make good on his promise by waiting for him under the Kaufmann's Clock with a dozen reporters and 100 on-lookers on January 24, 1983. DePasquale, however, was a no-show, later telling reporters that "I thought it would be undignified".[16]

In 2013 the Kaufmann's Clock celebrated its 100th Anniversary, to celebrate Macy's redecorated the store's windows along Smithfield Street with photos of the iconic clock from over the years, one held the results of a contest held by the Pittsburgh Post-Gazette in which readers submitted their best memories of "Meeting Under Kaufmann's Clock". Macy's also held a weekend of festivities including a block party on Smithfield Street in front of the store. Macy's also sold limited edition merchandise such as mugs, postcards, replicas, and Wendell August Products all depicting images of the iconic Pittsburgh timepiece.[17]

Kaufmann's was the main sponsor of the Celebrate the Season Parade since its inception in 1981, the parade which is the city and region's largest is always the Saturday after Thanksgiving. Kaufmann's continued sponsoring the parade for twenty-five years. The Parade had included balloons, musical acts, and celebrities for the main acts in front of the Kaufmann's Fifth Avenue flagship store. The local NBC-affiliated station, WIIC (now WPXI) broadcasts live 'Celebrate the Season Parade' coverage, with hosts Mike Hambrick-Edye Tarbox (1980–1991) and David Johnson-Peggy Finnegan (1991–present). After the Macy's merger with Kaufmann's in 2006, it continued sponsorship of the parade which it renamed the "My Macy's Holiday Parade" in 2010 as part of the store's "My Macy's" campaign. In February 2014, Macy's announced it would ended its partnership with WPXI as main sponsors of the parade. 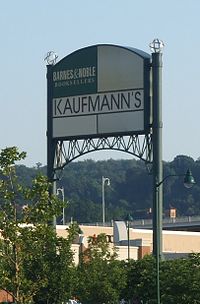 Though converted a year prior to this image's creation, this Macy's store located at The Waterfront still had Kaufmann's signage. The current Macy's sign can be seen slightly behind the trees. Macy's has since put a sign over this, but Kaufmann's is still readable beneath.

Although Kaufmann's was renamed Macy's, some of its namesake signs remain. There are several terra cotta plaques on the flagship store's facade still reading Kaufmann's, including above the original store entrance. The parking garage also has old signage still in place. One of the company's former warehouses, the 1901-built Kaufmann's Department Store Warehouse, is listed on the National Register of Historic Places.

The phrase "Does Horne's tell Kaufmann's its business?" was used in Western Pennsylvania to put-off to inquiring people, with the meaning that a company does not give proprietary information out to its competitors.[citation needed]