Kavala (Greek: Καβάλα; [kaˈvala]) is a city in northern Greece, the principal seaport of eastern Macedonia and the capital of Kavala regional unit.

It is situated on the Bay of Kavala, across from the island of Thasos and located on the Egnatia motorway, a one and a half-hour drive to Thessaloniki (160 kilometres (99 miles) west) and a forty-minute drive to Drama (37 km (23 miles) north) and Xanthi (56 km (35 miles) east).

In Antiquity the name of the city was Neapolis ('new city', like many Greek colonies). During the Middle Ages it was devoutly renamed Christoupolis ('city of Christ'.

The etymology of the modern name of the city is disputed. There are some explanations, either from the Italian cavallo (=horse), or from the Hebrew Kabbalah due to the large Jewish population of the city. Its nickname is The cyan city (Η γαλάζια πόλη). 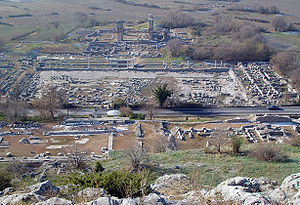 View of the archaeological site of Philippi.

The city was founded at about the end of the 7th century BC by settlers from Thassos, who called it Neapolis (Νεάπολις; "new city" in Greek). It was one of the colonies that the Thassians founded along the coastline in order to take advantage of the rich gold and silver mines of the territory, especially those located in the nearby Pangaion mountain (which were eventually exploited by Phillip II of Macedonia).

The worship of "Parthenos", a female deity of Greek–Ionian origin associated with Athena, is archaeologically attested in the archaic period. At the end of the 6th century BC Neapolis claimed its independence from Thassos and cut its own silver coins with the head of Gorgo (γοργὀνειο) on the one side. At the beginning of the 5th century BC a large Ionic temple made from thassian marble replaced the archaic one. Parts of it can now be seen in the archaeological museum of Kavala.

In 411 BC, during the Peloponnesian War, Neapolis was besieged by the allied armies of the Spartans and the Thassians but remained faithful to Athens. Two Athenian honorary decrees in 410 and 407 BC rewarded Neapolis for its loyalty.

Neapolis was a town of Macedonia, located 14 km (9 mi) from the harbor of Philippi. Neapolis was a member of the Athenian League; a pillar found in Athens mentions the contribution of Neapolis to the alliance. 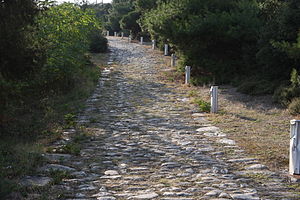 Via Egnatia in Kavala.

The military Roman road Via Egnatia passed through the city helped commerce to flourish. It became a Roman civitas in 168 BC, and was a base for Brutus and Cassius in 42 BC, before their defeat in the Battle of Philippi. (Appian, B.C. iv. 106; Dion Cass. xlvii. 35.).

The Apostle Paul landed at Kavala on his first voyage to Europe (Acts, xvi. 11).

View of the old town with the Byzantine fortress.

The arsenal and the food storage in the Byzantine castle

In the 6th century, Byzantine emperor Justinian I fortified the city in an effort to protect it from barbaric raids. In later Byzantine times the city was called Christoupolis (Χριστούπολις, "city of Christ") and belonged to the theme of Macedonia. The first mention of the new name is recorded in a taktikon of the early 9th century. The city is also mentioned in the "Life of St. Gregory of Dekapolis". In the 8th and 9th century, Bulgarian attacks forced the Byzantines to reorganize the defense of the area, giving great care to Christoupolis with fortifications and a notable garrison. Bulgarians also ruled it briefly. In 926 the Byzantine general (strategos) Basil Klaudon reconstructed the fallen walls of the city, ("τα πριν φθαρέντα και πεπτωκότα τείχη") according to an inscription that is now in the archaeological museum of Kavala. Due to the location of Christoupolis, the city experienced an economic resurgence, securing the contact between Constantinople and Thessaloniki.

During the Norman raid of Macedonia in 1185, the city was captured and burned. In 1302, the Catalans failed to capture the city. In order to prevent them from coming back, the Byzantine emperor Andronikos III Palaiologos built a new long defensive wall ("το παρά την Χριστούπολιν τείχισμα"). It was ruled by Serbian Empire between 1345 and 1371. In 1357 it is mentioned that the Byzantine officers and brothers Alexios and John controlled the city and its territory. Recent excavations have revealed the ruins of an early Byzantine basilica under an old Ottoman mosque in the old part of the city (Panagia peninsula). This Christian temple was used until the late Byzantine era, as the also recently revealed small cemetery around it shows.

Residence of Muhammad Ali of Egypt.

The Ottoman Turks first captured the city in 1387 and completely destroyed it in 1391, as a Mount Athos chronicle testifies. Kavala was part of the Ottoman Empire from 1387 to 1912. In the middle of the 16th century, Ibrahim Pasha, Grand Vizier of Suleiman the Magnificent, contributed to the prosperity and growth of Kavala by the construction of an aqueduct.[2] The Ottomans also extended the Byzantine fortress on the hill of Panagia. Both landmarks are among the most recognizable symbols of the city today.

Mehmet Ali, the founder of a dynasty that ruled Egypt, was born in Kavala in 1769. His house has been preserved as a museum. 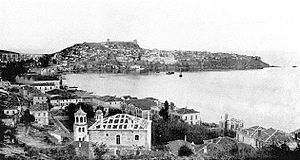 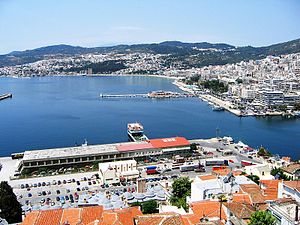 View to the port and downtown. 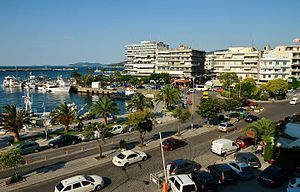 View of the seafront 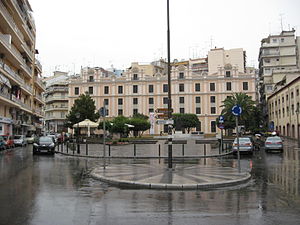 Center of the city.

Kavala was briefly occupied by the Bulgarians during the first Balkan War in 1912, but was finally captured by Greece in 1913 during a successful landing operation by the Greek Navy that was commanded by the famous admiral Pavlos Kountouriotis. During World War I Kavala suffered from the Bulgarian military occupation with many victims among its Greek population.[citation needed] After the Greco-Turkish War of 1919–1922, the city entered a new era of prosperity because of the labour offered by the thousands of refugees that moved to the area from Asia Minor. The development was both industrial and agricultural. Kavala became greatly involved in the processing and trading of tobacco. Many buildings related to the storage and processing of tobacco from that era are preserved in the city.

During World War II and after the fall of Athens, the Nazis awarded Kavala to their Bulgarian allies in 1941, causing the city to suffer once again, but finally was liberated in 1944.

In the late 1950s Kavala expanded towards the sea by reclaiming land from the area west of the port.

In 1967, King Constantine II left Athens for Kavala in an unsuccessful attempt to launch a counter-coup against the military junta.

Christopolis was important enough in the Late Roman province of Macedonia Secunda to be a suffragan of its capital Philippi's Metropolitan Archbishopric, but the Catholic succession ended.

The diocese of Christopolis was nominally restored in 1933 as a Latin Catholic titular bishopric.

It is vacant, having had the following, far from consecutive, incumbents of the lowest (episcopal) rank, except the latest (archiepiscopal, intermediary rank) : 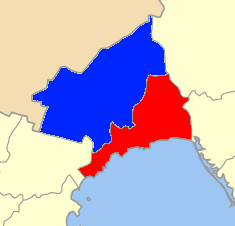 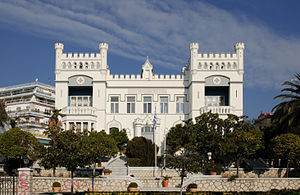 The municipality of Kavala was formed at the 2011 local government reform by the merger of the two former municipalities, which became municipal units:[3]

Kavala is built amphitheatrically, with most residents enjoying superb views of the coast and sea. Some of the regions inside Kavala are:

Kavala is twinned with:

The province of Kavala (Greek: Επαρχία Καβάλας) was one of the provinces of the Kavala Prefecture. Its territory corresponded with that of the current municipality Kavala, and part of the municipal unit Eleftheroupoli.[4] It was abolished in 2006. 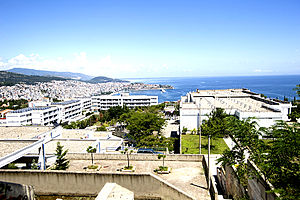 Kavala hosts a wide array of cultural events, which mostly take place during the summer months. The top festival is the Festival of Philippi,[10] which lasts from July to September and includes theatrical performances and music concerts. Since 1957, it has been the city's most important cultural event and one of the most important of Greece.

Cosmopolis is an International Festival held in the Old Town of Kavala that offers an acquaintance with cultures around the world through dancing and musical groups, traditional national cuisines, cinema, and exhibits at the kiosks of the participant countries.

Ilios ke Petra (Sun and Stone)(July): a Festival held in “Akontisma” of Nea Karvali. The event is of folkloric character, with the participation of traditional dancing groups from all over the world.

Kavala AirSea Show:[13] An annual air show, which takes place during the last days of June

Besides, various cultural events are held in all municipalities of Kavala during the summer months.

Fish and sea food, as well as the products of the local livestock breeding and agricultural sectors are the prevailing elements of Kavala courses. In Kavala, the traditional local recipes have been influenced by the cuisine of the refugees from Pontos, Asia Minor and Kappadokia. Fresh fish and sea food, salted food, mackerel "gouna" (sun dried mackerel on the grill), sardine pantremeni, mussels with rice, herring saganaki, anchovies wrapped in grape leaves, Stuffed eggplant: these are some very renowned recipes in Kavala and the coastal settlements of the region. The grapes, wine and tsipouro produced in the area, as well as the kourabiedes (sugar-coated almond biscuits) from Nea Karvali are particularly famous. 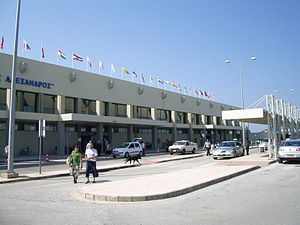 Outside the airport Megas Alexandros.

European route E90 runs through the city and connects Kavala with the other cities. The Egnatia Motorway (A2) lies north of the city. One can enter the city from one of two Junctions; 'Kavala West' and 'Kavala East'.Kavala has regular connection with Interregional Bus Lines (KTEL) from and to Thessaloniki and Athens.

The Kavala International Airport "Alexander the Great" (27 km (17 mi) from Kavala) is connected with Athens by regularly scheduled flights and with many European cities by scheduled and charter flights.

Kavala is connected with all the islands of the Northern Aegean Sea with frequent itineraries of various ferry lines.

The city is connected with all of the large Greek cities such as Thessaloniki and Athens. All of the local villages are also connected via bus lines. The cost of tickets is very cheap. There is also a shuttle bus in Kavala with these lines : 1. Vironas - Kallithea 2. Dexameni 3. Cemetery 4. Kipoupoli - Technological Institute 5. Agios Loukas 6. Profitis Ilias 7. Stadium 8. Kalamitsa - Batis ( only in summer ) 9. Agios Konstantinos 10. Neapoli 11. Hospital - Perigiali 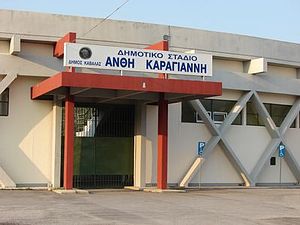 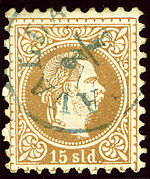 Austria opened a post office in Kavala before 1864.[17] Between 1893 and 1903, the French post office in the city issued its own postage stamps; at first stamps of France overprinted with "Cavalle" and a value in piasters, then in 1902 the French designs inscribed "CAVALLE".