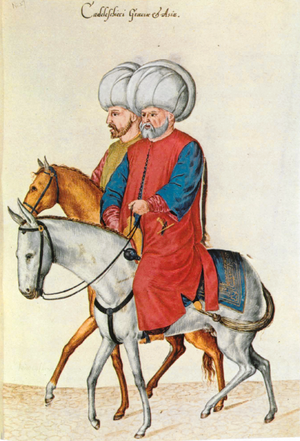 The two kazaskers in a 17th-century illustration

A kazasker (Ottoman Turkish: قاضی عسكر‎, also transliterated as qadi'asker or kadi'asker, from kadı-ul asker, "judge of the soldiers") was a chief judge in the Ottoman Empire, so named originally because his jurisdiction extended to the cases of soldiers, who were later tried only by their own officers.[1] Two kazaskers were appointed, called Rumeli Kazaskeri and Anadolu Kazaskeri, having their jurisdiction respectively over the European and the Asiatic part of the Empire. They were subordinated to the Şeyhülislam, and had no jurisdiction over the city of Istanbul. Moreover, they attended the meetings at the Imperial Council.[2]