The Kazunogawa Dam (葛野川ダム) uses water from the Sagami River system to power a 1,200 MW pumped storage hydroelectric scheme. It is located 18 kilometres (11 mi) east of Kōshū in Yamanashi Prefecture, Japan. The station is designed to have an installed capacity of 1,600 megawatts (2,100,000 hp) and three of the four 400 megawatts (540,000 hp) generators are currently operational. Construction on the power station began in 1993 and the first generator was commissioned on 3 December 1999. The second was commissioned on 8 June 2000. The third on become operational on 9 June 2014, six year early due to post-power demand from the Great East Japan earthquake. The fourth and final generator is slate to be commissioned by 2024. It is owned by TEPCO and was constructed at a cost of $2.2 billion USD.[4][5] 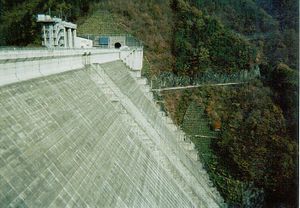 The Kazunogawa Dam which creates the lower reservoir

When energy demand is high, water from the upper reservoir is released down to the underground power station via a single 3.3 kilometres (2.1 mi) long headrace tunnel which splits into two 1.8 kilometres (1.1 mi) tunnels before each separate into two 620 metres (2,030 ft) long penstocks. Each penstock feeds a single reversible 400 MW Francis turbine-generator with water before it is released into a 3.3 kilometres (2.1 mi) long tailrace tunnel which discharges into the lower reservoir, created by the Kazunogawa Dam. When energy demand is low and therefore inexpensive, the turbines reverse into pumps and send water from the lower reservoir back to the upper reservoir. The process is repeated when necessary to help balance electricity loads. The difference in elevation between the upper and lower reservoirs affords an effective hydraulic head of 714 metres (2,343 ft) and maximum of 779 metres (2,556 ft).[1][6][7]