Keble College is one of the constituent colleges of the University of Oxford in England. Its main buildings are on Parks Road, opposite the University Museum and the University Parks. The college is bordered to the north by Keble Road, to the south by Museum Road, and to the west by Blackhall Road.

Keble was established in 1870, having been built as a monument to John Keble. John Keble had been a leading member of the Oxford Movement, which sought to stress the Catholic nature of the Church of England. Consequently, the College traditionally placed a considerable emphasis on theological teaching, although this is less the case now. In the period after the second World War the trends were towards scientific courses (the major area devoted to science east of the University Museum influenced this) and eventually co-education for men and women from 1979 onwards. As originally constituted it was for men only and the fellows were mostly bachelors resident in the college.

It remains distinctive for its still-controversial[3] neo-gothic red-brick buildings designed by William Butterfield. The buildings are also notable for breaking from Oxbridge tradition by arranging rooms along corridors rather than around staircases, in order that the scouts could supervise the comings and goings of visitors. (Girton College, Cambridge similarly breaks this tradition).

Keble is one of the larger colleges of the University of Oxford, with 433 undergraduates and 245 graduate students in 2011/12.[4] 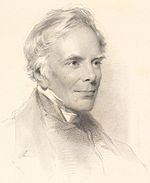 John Keble, a leading member of the Oxford Movement whom the college is named for.

The best-known of Keble's Victorian founders was Edward Pusey, after whom parts of the College are named. The College itself is named after John Keble, one of Pusey's colleagues in the Oxford Movement, who died four years before its foundation in 1870. It was decided immediately after Keble's funeral that his memorial would be a new Oxford college bearing his name. Two years later, in 1868, the foundation stone was laid by the Archbishop of Canterbury on St Mark's Day (25 April, John Keble's birthday).[5] The college first opened in 1870, taking in thirty students, whilst the Chapel was opened on St Mark's Day 1876. Accordingly, the College continues to celebrate St Mark's Day each year.

William Butterfield, the original architect, a High Churchman himself, produced a vigorous masterpiece of Victorian Gothic, among his few secular buildings, which Sir Nikolaus Pevsner characterised as "manly",[6] and which, Charles Eastlake asserted, defied criticism,[7] but which only slowly gained adherents during the later 20th century. The College is built of red, blue, and white bricks; the main structure is of red brick, with white and blue patterned banding. The builders were Parnell & Son of Rugby. Sir Kenneth Clark recalled that during his Oxford years it was then generally believed in Oxford not only that Keble College was "the ugliest building in the world" but that the buildings had their polychromatic origins in Ruskinian Gothic.[8] 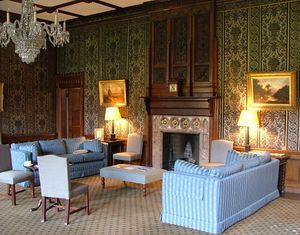 On its construction, Keble was not widely admired within the University, particularly by the undergraduate population of nearby St John's College (from which Keble had purchased their land). A secret society was founded,[9] entrance to which depended upon removing one brick from the College and presenting it to the society's elders. Some accounts specify that one of the commonest red bricks was necessary for ordinary membership, a rarer white brick for higher-level membership, and one of the rarest blue bricks for chairmanship. The hope was that eventually Keble would be completely demolished. As a result, there remains a healthy rivalry between St John's and Keble to this day.

An apocryphal story claims that a French visitor, on first sight of the college exclaimed C'est magnifique mais ce n'est pas la gare? ("It is magnificent but is it not the railway station?"). This is a play on Field Marshal Pierre Bosquet's memorable line, referring to the Charge of the Light Brigade, C'est magnifique, mais ce n'est pas la guerre ("It is magnificent, but it is not war"). This story may have been borrowed from Pinero's identical quip said to have been made at the opening ceremony for the Royal Courts of Justice in London.

Keble is mentioned in John Betjeman's poem "Myfanwy at Oxford", as well as in the writings of John Ruskin and in Monty Python's "Travel Agent" sketch. Horace Rumpole, the barrister in John Mortimer's books, was a law graduate of Keble College after World War II.

In 2005, Keble College featured in the national UK press when its bursar, Roger Boden, was found guilty of racial discrimination by an employment tribunal.[10][11] An appeal was launched by the College and Mr Boden against the tribunal's judgement, resulting in a financial out-of-court settlement with the aggrieved employee. 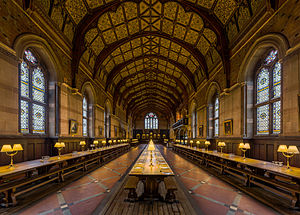 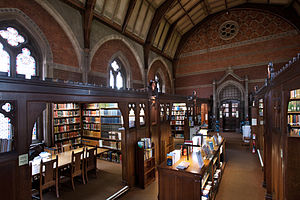 The best-known portion of Keble's buildings is the distinctive main brick complex, designed by Butterfield.[12] The design remained incomplete due to shortage of funds. The Chapel and Hall were built later than the accommodation blocks to the east and west of the two original quadrangles and the warden's house at the south-east corner. The Chapel and Hall were both fully funded by William Gibbs and were also designed by William Butterfield.

A section west of the Chapel was built in a different style in the 1950s with funds from Antonin Besse. Later still other significant additions have been added, most notably the modern, brick Hayward and de Breyne extensions by Ahrends, Burton and Koralek. The de Breyne extension was made possible by a generous response from the businessman André de Breyne and other fund-raising efforts. The ABK buildings included the college's memorable, futuristic "goldfish bowl" bar, opened on 3 May 1977 and recently refurbished and expanded. In 1995, work was completed on the ARCO building by the US-born architect Rick Mather. This was followed in 2002 by another similarly styled building also designed by Mather, the Sloane-Robinson building. Along with a number of additional student bedrooms the Sloane Robinson building also provided the college with the O'Reilly Theatre (a large multipurpose lecture theatre), a dedicated room for musical practice, a number of seminar rooms and a large open plan space which during term time is used as a café and social space for all members of the college.

The College contains four quads: Liddon (the largest), Pusey, Hayward and Newman. The original fellows garden was lost in the programme of extension, as were a range of houses on Blackhall Road.

In July 2004 Keble announced the purchase of the former Acland Hospital for £10.75 million. This 1.7-acre (6,900 m2) site, situated a couple of minutes walk from the main college buildings, currently houses an estimated 100 graduate students but will in time be redeveloped to provide double the number of rooms. Keble previously owned a number of houses across Oxford which were used as additional student accommodation, but these were sold following the purchase of the Acland site. 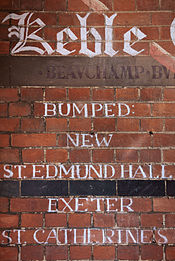 Bumps results of the boat club on a wall in Keble

The College publishes a termly magazine called The Brick which is sent to Keble alumni to update them on College life. Students used to publish an irreverent spoof version on the last Friday of each term, also named The Brick, recording college gossip. This version has not been published since Hilary 2006, however, and is possibly due in part to the growth of ubiquitous social networking website Facebook. The college has since seen the release of a student publication calling itself The Breezeblock, containing both college gossip and a satirical take on college life.

Keble were champions of the television quiz show University Challenge in 1975 and 1987.

Each year the Advanced Studies Centre invites distinguished speakers for their Creativity Lecture Series. In 2011 the list included Nicholas Humphrey, Tim Ingold and Steve Rayner, whereas in 2012 Robin Dunbar, Kevin Warwick and Margaret Boden were featured.

The Keble Ball is planned by the student committee to coincide with the day-long graduation ceremony in Trinity term week 2.[13]

Keble fields a number of sports teams, its rugby teams have been successful in winning the intercollegiate league for five seasons in a row and triumphing in the 2007, 2009, 2011 and 2015 rugby Cuppers, having also been finalists in 2008 and 2010. Keble College Boat Club, the college rowing club compete annually in Torpids and Summer Eights.

Keble College Sports Ground is located on Woodstock Road, and as well as hosting intercollegiate ("Cuppers") matches, also lays the stage for annual fixtures between current undergraduates and Old Members ("Ghosts"), particularly in football and cricket. Commemorative photographs of important matches adorn the walls of the Keble Cricket Pavilion inside the ground.

The Light of the World

The Light of the World (later version)

Keble owns the original of William Holman Hunt's famous painting The Light of the World, which is hung in the side chapel (accessed through the chapel). The picture was completed in 1853 after eight years of work, and originally hung in the Royal Academy. It was then given as a gift to the college. Hunt originally wanted the painting to be hung in the main chapel but the architect rejected this idea, as a result he painted another version of the painting which is in St Paul's Cathedral, London. This copy was painted by Hunt when he was nearly 70.

Keble College has the distinction of being the first college to issue stamps for the prepayment of a porter/messenger delivery service in 1871 only 1 year after it was founded, and it set the pace for other Oxford Colleges to issue their own stamps. This service was successfully challenged by the post office in 1886.

Keble also issued a College stamp in 1970 to mark its 100th anniversary.