From Infogalactic: the planetary knowledge core
Jump to: navigation, search
Not to be confused with Berghof (residence).

The Kehlsteinhaus (known as the Eagle's Nest in English-speaking countries) is a Third Reich-era edifice erected atop the summit of the Kehlstein, a rocky outcrop that rises above the Obersalzberg near the town of Berchtesgaden. It was presented to Adolf Hitler on his 50th birthday as a retreat and place to entertain friends and visiting dignitaries. Today it is open seasonally as a restaurant, beer garden, and tourist site. 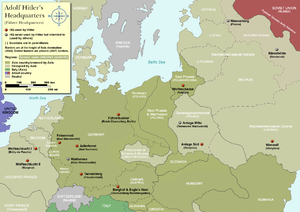 From a large car park a 124 m (407 ft) entry tunnel leads to an ornate elevator which ascends the final 124 m (407 ft) to the building.[1] Its car is surfaced with polished brass, Venetian mirrors and green leather. Construction of the entire project cost the lives of 12 workers.[2] The building's main reception room is dominated by a fireplace of red Italian marble presented by Italian dictator Benito Mussolini, which was damaged by Allied soldiers chipping off pieces to take home as souvenirs. Much of the furniture was designed by Paul László. 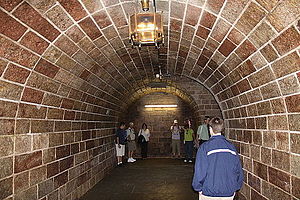 Underground passage to the Kehlsteinhaus elevator

Referred to as the "D-Haus", short for "Diplomatic Reception Haus", the Kehlsteinhaus is often conflated with the Mooslahnerkopf tea house at the Berghof,[3] which Hitler visited daily after lunch.[4] That teahouse no longer exists, as it was demolished by the Bavarian government after the war.[5]

The Kehlsteinhaus was to be the aiming point of an April 25, 1945 Royal Air Force bombing raid conducted by No. 1, No. 5, and No. 8 Group and No. 617 Squadron.[7] The small house proved an elusive target for the force of 359 Avro Lancasters and 16 de Havilland Mosquitoes, with the Berghof area bombed and severely damaged instead.

It is uncertain which Allied military unit was the first to reach the Kehlsteinhaus; several claim the honor. The matter is compounded by popular confusion of it and the town of Berchtesgaden taken on May 4 by forward elements of the 7th Infantry Regiment of the 3rd Infantry Division of XV Corps of the U.S. Seventh Army of the Sixth Army Group.[8][9][lower-alpha 1]

Reputedly members of the 7th went as far as the elevator to the Kehlsteinhaus,[8] with at least one individual claiming he and a partner continued on to the top.[12]

However, the 101st Airborne maintains it was first both to Berchtesgaden and the Kehlsteinhaus,[13] a claim compounded by fabulations of popular media.[lower-alpha 2] Also, elements of the French 2nd Armored Division, Laurent Touyeras, Georges Buis and Paul Répiton-Préneuf, were present on the night of May 4 to 5, and took several photographs before leaving on May 10 at the request of US command.[14]

Undamaged in the April 25 bombing raid, the Kehlsteinhaus was subsequently used by the Allies as a military command post until 1960, when it was handed back to the State of Bavaria.

Today the building is owned by a charitable trust, and serves as a restaurant offering indoor dining and an outdoor beer garden. It is a popular tourist attraction to those who are attracted by the historical significance of the "Eagle's Nest". The road has been closed to private vehicles since 1952, but the house can be reached on foot (in two hours) from Obersalzberg, or by bus from the Documentation Center there. The Kehlsteinhaus itself does not mention much about its past.[15]

Informal tours of the Kehlsteinhaus are available to be booked through the official website. Due to concern about neo-Nazis and post-war Nazi sympathisers no external guides are permitted to conduct tours.

The lower rooms are not part of the restaurant but can be visited with a guide. They offer views of the building's past through plate-glass windows. Graffiti left by Allied troops is still clearly visible in the surrounding woodwork. A large fireplace in the restaurant itself shows severe damage along its lower edges where soldiers have smashed off small shards of marble as souvenirs. Hitler's small study is now a store room for the cafeteria.

A trail leads above the Kehlsteinhaus towards the Mannlgrat ridge reaching from the Kehlstein to the summit of the Hoher Göll. The route, which is served by a Klettersteig, is regarded as the easiest to the top.[16]