From Infogalactic: the planetary knowledge core
(Redirected from Kellogg Company)
Jump to: navigation, search
For other uses, see Kellogg (disambiguation).

Kellogg's products are manufactured in 18 countries and marketed in over 180 countries.[4] Kellogg's largest factory is at Trafford Park in Manchester, United Kingdom, which is also the location of its European headquarters.[5] Kellogg's holds a Royal Warrant from Queen Elizabeth II and the Prince of Wales. 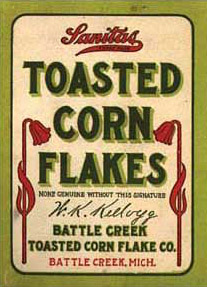 Kellogg's was founded as the Battle Creek Toasted Corn Flake Company on February 19, 1906, by Will Keith Kellogg as an outgrowth of his work with his brother John Harvey Kellogg at the Battle Creek Sanitarium following practices based on the Seventh-day Adventist Church. The company produced and marketed the hugely successful Kellogg's Toasted Corn Flakes and was renamed the Kellogg Company in 1922.

In 1930, the Kellogg Company announced that most of its factories would shift towards 30 hour work weeks, from the usual 40. W.K. Kellogg stated that he did this so that an additional shift of workers would be employed in an effort to support people through the depression era. This practice remained until World War II, and continued briefly after the war, although some departments and factories remained locked into 30 hour work weeks until 1980.[6]

From 1969 to 1977, Kellogg's acquired various small businesses including Salada Foods, Fearn International, Mrs. Smith's Pies, Eggo, and Pure Packed Foods;[7] however, it was later criticized for not diversifying further like General Mills and Quaker Oats were. After underspending its competition in marketing and product development, Kellogg's U.S. market share hit a low 36.7% in 1983. A prominent Wall Street analyst called it "a fine company that's past its prime" and the cereal market was being regarded as "mature". Such comments invigorated Kellogg chairman William E. LaMothe to improve, which primarily involved approaching the demographic of 80 million baby boomers rather than marketing children-oriented cereals. In emphasizing cereal's convenience and nutritional value, Kellogg's helped persuade U.S. consumers age 25 to 49 to eat 26% more cereal than people of that age ate five years prior. The U.S. ready-to-eat cereal market, worth $3.7 billion at retail in 1983, totaled $5.4 billion by 1988, and had expanded three times as fast as the average grocery category. Kellogg's also introduced new products including Crispix, Raisin Squares, and Nutri-Grain Biscuits and reached out internationally with Just Right aimed at Australians and Genmai Flakes for Japan. During this time, the company maintained success over its top competitors: General Mills, which largely marketed children's cereals, and Post, which had difficulty in the adult cereal market.[8]

In March 2001, Kellogg's made its largest acquisition, the Keebler Company. Over the years, it has also gone on to acquire Morningstar Farms and Kashi divisions or subsidiaries. Kellogg's also owns the Bear Naked, Natural Touch, Cheez-It, Murray, Austin cookies and crackers, Famous Amos, Gardenburger (acquired 2007), and Plantation brands. Presently, Kellogg's is a member of the World Cocoa Foundation.

In 2012, Kellogg's became the world's second-largest snack food company (after Pepsico) by acquiring the Pringles potato crisps brand from Procter & Gamble for $2.7 billion in a cash deal.[9] 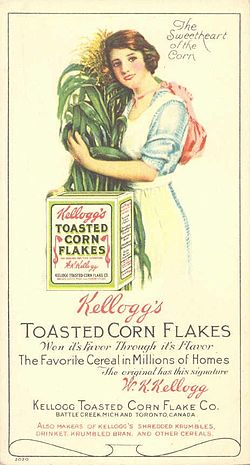 A list of cereal products produced by Kellogg's, with available varieties:

A banana-flavoured variation of Rice Krispies. First appeared in the UK in 1995, but discontinued shortly thereafter.

Sold in the UK for a limited period 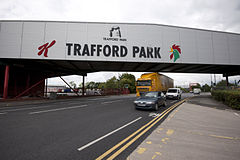 The Trafford Park factory in Greater Manchester, England—Kellogg's European base since 1938.[5] The factory produces more cornflakes than any other Kellogg's factory in the world.[26] 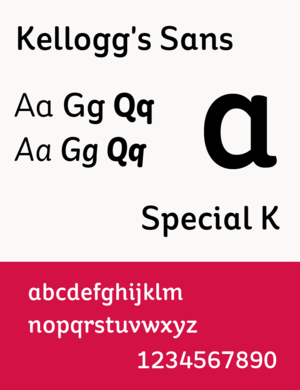 Various methods have been used in the company's history to promote the company and its brands. Foremost among these is the design of the Kellogg's logo by Ferris Crane under the art direction of famed type guru Y. Ames. Another was the well-remembered jingle "K E double-L, O double-good, Kellogg's best to you!"

Some of Kellogg's marketing has been questioned in the press, prompted by an increase in consumer awareness of the mismatch between the marketing messages and the products themselves.[41]

Food bloggers are also questioning the marketing methods used by cereal manufacturing companies such as Kellogg's, due to their high sugar content and use of ingredients such as high-fructose corn syrup.[42]

Kellogg's was a major sponsor throughout the run of the hit CBS panel show What's My Line?[43] It and its associated products Frosted Flakes and Rice Krispies were also major sponsors for the PBS Kids children's animated series Dragon Tales.[44]

W.K. Kellogg was the first to introduce prizes in boxes of cereal. The marketing strategy that he established has produced thousands of different cereal box prizes that have been distributed by the tens of billions.[45]

Kellogg's Corn Flakes had the first cereal premium with The Funny Jungleland Moving Pictures Book. The book was originally available as a prize that was given to the customer in the store with the purchase of two packages of the cereal.[46] But in 1909, Kellogg's changed the book give-away to a premium mail-in offer for the cost of a dime. Over 2.5 million copies of the book were distributed in different editions over a period of 23 years.[47]

In 1945, Kellogg's inserted a prize in the form of pin-back buttons into each box of Pep cereal. Pep pins have included U.S. Army squadrons as well as characters from newspaper comics and were available through 1947. There were five series of comic characters and 18 different buttons in each set, with a total of 90 in the collection.[45] Other manufacturers of major brands of cereal, including General Mills, Malt-O-Meal, Nestlé, Post Foods, and Quaker Oats, followed suit and inserted prizes into boxes of cereal to promote sales and brand loyalty.

Licensed brands have been omitted since the corresponding mascots would be obvious (e.g. Spider-Man is the mascot for Spider-Man Spidey-Berry).

Kellogg's made its first foray into auto racing between 1991 and 1992, when the company sponsored the #41 Chevrolets fielded by Larry Hedrick Motorsports in the NASCAR Winston Cup Series and driven by Phil Parsons, Dave Marcis, Greg Sacks, Hut Stricklin, and Richard Petty, but they gained greater prominence for their sponsorship of 2-time Winston Cup Champion Terry Labonte from 1993 to 2006, the last 12 years of that as the sponsor for Hendrick Motorsports' #5 car. Kellogg's sponsored the #5 for Labonte, Kyle Busch, Casey Mears, and Mark Martin until 2010, and it then served as an associate sponsor for Carl Edwards' #99 car for Roush Fenway Racing.

Kellogg's has used some merchandising for their products. Kellogg's once released Mission Nutrition, a PC game that came free with special packs of cereal. It played in a similar fashion as Donkey Kong Country; users could play as Tony the Tiger, Coco the Monkey, or Snap, Crackle, and Pop. Kellogg's has also released "Talking" games. The two current versions are Talking Tony and Talking Sam. In these games, a microphone is used to play games and create voice commands for their computers. In Talking Tony, Tony the Tiger, one of Kellogg's most famous mascots, would be the main and only character in the game. In Talking Sam, Toucan Sam, another famous mascot, would be in the game, instead. Some toy cars have the Kellogg's logo on them, and occasionally their mascots.

There was also a Talking Snap Crackle and Pop software.

Kellogg's has donated around US$2 million opposing California Proposition 37, a ballot initiative that, if enacted, would have required compulsory labeling of genetically engineered food products.[48]

On June 25, the company voluntarily began to recall about 28 million boxes of Apple Jacks, Corn Pops, Froot Loops and Honey Smacks because of an unusual smell and flavor from the packages' liners that could make people ill. Kellogg's said about 20 people complained about the cereals, including five who reported nausea and vomiting. Consumers reported the cereal smelled or tasted waxy or like metal or soap. Company spokeswoman J. Adaire Putnam said some described it as tasting stale. However, no serious health problems have been reported.[49]

The suspected chemical that caused the illnesses was 2-methylnaphthalene, used in the cereal packaging process. Little is known about 2-methylnaphthalene's impact on human health as the Food and Drug Administration has no scientific data on its impact on humans, and the United States Environmental Protection Agency (EPA) also does not have health and safety data. This is despite the EPA having sought information on it from the chemical industry for 16 years. 2-Methylnaphthalene is a component of crude oil, and is "structurally related to naphthalene, an ingredient in mothballs and toilet-deodorant blocks" that the EPA considers a possible human carcinogen.[50][51]

Kellogg's offered consumers refunds in the meantime.[citation needed] Only products with the letters "KN" following the use-by date were included in the recall. The products were distributed throughout the U.S. and began arriving in stores in late March 2010. Products in Canada were not affected.[citation needed]

Kellogg's issued a voluntary recall of some of its “Frosted Mini-Wheats Bite Size Original” and “Mini-Wheats Unfrosted Bite Size” products due to the possibility of flexible metal mesh fragments in the food. The affected products varied in size from single-serving bowls to large 70-ounce cartons. Use-by dates printed on the recalled packages ranged from April 1, 2013 to September 21, 2013, and were accompanied by the letters KB, AP or FK.[52]

We expect more from a great American company than making dubious claims—not once, but twice—that its cereals improve children's health...

On June 3, 2010, Kellogg's was found to be making unsubstantiated and misleading claims in advertising their cereal products by the Federal Trade Commission (FTC).[53][54][55]

Kellogg's responded by stating "We stand behind the validity of our product claims and research, so we agreed to an order that covers those claims. We believe that the revisions to the existing consent agreement satisfied any remaining concerns."[55]

The Children's Advertising Review Unit of the Council of Better Business Bureaus has also suggested that the language on Kellogg Pop-Tarts packages saying the pastries are "Made with Real Fruit" should be taken off the products.[57] In July 2012, Britain banned the "Kellogg's" Special K advertisement due to its misleading information about calorific value and weight loss.[58]