Inspired by a number of successful British middle distance runners in the late 1970s and early 1980s, Holmes began competing in middle distance events in her youth. She joined the British Army, but continued to compete at the organisation's athletics events. She turned to the professional athletics circuit in the early 1990s and in 1994 she won the 1500 m at the Commonwealth Games and took silver at the European Championships. She won a silver and a bronze medal at the 1995 Gothenburg World Championships, but suffered from various injuries over the following two years, failing to gain a medal at her first Olympics in Atlanta 1996. She won silver in the 1500 m at the 1998 Commonwealth Games and bronze in the 800 m at the 2000 Sydney Olympics; her first Olympic medal.

She took part in her final major championship in 2004 — she turned in a double gold medal-winning performance at the Athens Olympics, finishing as the 800 m and 1500 m Olympic Champion. For her achievements she won numerous awards and was appointed Dame Commander of the Order of the British Empire (DBE) in 2005. She retired from athletics in 2005 and has since made a number of television appearances.

She participated as a contestant in the 2015 series of Bear Grylls: Mission Survive and was the runner-up after the 12-day survival mission.

Holmes was born in Pembury, Kent, the daughter of Derrick Holmes, a Jamaican-born car mechanic, and an English mother, Pam Norman. Her mother, 18 at the time of her birth, married painter and decorator Michael Norris, whom Holmes regards as her father, seven years later, and the couple had two more children (Kevin, born 1977 and Stuart, born 1980) before splitting up in 1987. Holmes grew up in Hildenborough and attended Hildenborough CEP School, and then Hugh Christie Comprehensive School in Tonbridge at the age of 12.

She started training for athletics at the age of 12, joining Tonbridge Athletics Club, where she was coached by David Arnold and went on to win the English schools 1500 metres in her second season in 1983.[citation needed] Her hero was British middle distance runner Steve Ovett, and she was inspired by his success at the 1980 Summer Olympics.

However, Holmes later turned her back on athletics, joining the British Army at the age of 18, having left school two years earlier, working initially as a shop assistant in a sweet shop and later as a nursing assistant for disabled patients.[citation needed] In the Army, she was initially a lorry driver in the Women's Royal Army Corps (WRAC), later becoming a basic Physical Training Instructor (PTI).[citation needed] Holmes then elected in June 1990 to attend the first course to be run under the new Army Physical Training Corps syllabus, and successfully passed out as a Class 2 PTI. Although militarily quite young, Holmes' athletic prowess was impressive and she was encouraged to attend the course selection for full-time transfer to the Army Physical Training Corps (APTC).

Holmes eventually qualified as a Sergeant Class 1 PTI, although she remained in the Adjutant General's Corps after the disbandment of the WRAC in 1992.[citation needed] She also became British Army judo champion and in Army athletics events once competed in the men's 800 metres at a meeting, as it was considered that for her to run in the women's event would be too embarrassing for the other competitors. At another event, she competed in and won an 800 metres, a 3000 metres and a relay race all in a single day. She also won the Heptathlon.

Holmes watched the 1992 Summer Olympics on television, and seeing Lisa York in the heats of the 3000 metres, an athlete whom she had competed against, and beaten, decided to return to athletics. For several years she combined both athletics and her employment in the Army, until increased funding allowed her to become a full-time athlete in 1997. 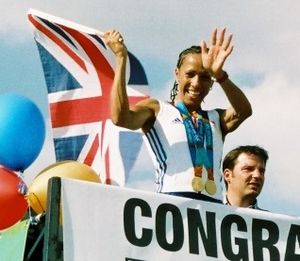 While training in 2003 for the 2004 Summer Olympics at a French training camp, Holmes suffered leg injuries and was very depressed, she began to meditate using an English lantern "I made one cut for every day that I had been injured", Holmes stated in an interview with the News of the World newspaper. At least once, she considered suicide, but she eventually sought help from a doctor and was diagnosed with clinical depression. While she could not use anti-depressants because it would affect her performance, she began using herbal serotonin tablets. In 2005, after her achievements at the 2004 Summer Olympics, Holmes chose to talk about her self-harm to show others that being a professional athlete is an extremely difficult thing to do and places the athlete under tremendous amounts of stress.

2004 saw Holmes arrive at a major competition, the Athens Olympics, with no injury worries for just about the first time in her career. She had originally planned to compete in just the 1500 m but a victory over Jolanda Čeplak before the games had many saying she should take her chance in the 800 m as well.[citation needed] Holmes did not announce her decision to race in both events until five days before the 800 m finals.

Along with three time World Champion Maria de Lurdes Mutola and Čeplak, Holmes was considered one of the favourites for the gold medal in the 800 m. In the final, Holmes ran a well-paced race, ignoring a fast start by a number of the other competitors, and moved into the lead ahead of Mutola on the final bend, taking the gold on the line ahead of Hasna Benhassi and Čeplak, with Mutola in fourth. Holmes became the seventh British woman to win an athletics gold, and the second after Ann Packer in 1964 to win the 800 metres.

In the final of the 1500 m, again running from the rear of the field, she took the lead in the final straight, holding off World Champion Tatyana Tomashova of Russia.[citation needed] She thus became only the third woman in history to do the 800 m and 1500 m double (after Tatyana Kazankina of the Soviet Union in 1976 and Svetlana Masterkova of Russia in 1996), and Britain's first double gold medallist at the same games since Albert Hill in 1920.[citation needed] Her time of 3 minutes 57.90 seconds in the 1500m final also set a new British record for the distance.[citation needed]

Subsequently, Holmes was given the honour of carrying the British flag at the closing ceremony of the games, on 29 August, the day after her second victory.[citation needed] A home-coming parade was held in her honour through the streets of Hildenborough and Tonbridge on 1 September, which was attended by approximately 40,000 people.[citation needed] Holmes won the BBC Sports Personality of the Year in 2004, saying she achieved her goals after "twenty years of dreaming". She also asserted the award was "the biggest sporting honour your country can give you". The tributes to her at the BBC awards ceremony were led by the six British female athletes who had previously won gold at the Olympic Games in a "Magnificent Seven"-style feature — those six being Mary Rand, Ann Packer, Mary Peters, Tessa Sanderson, Sally Gunnell and Denise Lewis.[citation needed]

In 2008, Holmes founded the DKH Legacy Trust, a registered charity,[2] to support young athletes and help the lives of young people across the UK.[3] As part of her pledge to the charity, she will participate in the Powerman UK duathlon in 2014, one of several fundraising events she will take part in.[4]

In 2005, she won the Laureus World Sports Award for Sportswoman of the Year.[citation needed] That same year, she named the P&O Cruise ship MS Arcadia.[5]

On 21 August 2005, she competed in her final race in the UK, the 800 m at the Norwich Union British Grand Prix meeting in Sheffield. Her training schedule during the summer of 2005 had been disrupted by a recurrent Achilles tendon injury, and she finished the race in 8th place, limping across the finish line and completing a lap of honour on a buggy.

On 6 December 2005, Holmes announced her retirement from athletics, stating she had reassessed her future after the death of a friend as well as citing a lack of motivation to continue.

On 16 September 2007, Holmes presented the weekly round-up of sports news on the BBC London News as an apparent substitute for regular presenter Mark Bright. Holmes was introduced by anchorwoman Riz Lateef without explanation. Reading from the autocue in a glamorous dress with elaborate hairstyle, Holmes appeared confident and enthusiastic, leading to speculation that this might presage a career in broadcasting. Neither the BBC nor Dame Kelly has made any public statement since.

Holmes is the aunt of British decathlete, Andrew Holmes.[6]

In 2008, Holmes set up the Dame Kelly Holmes Trust, a charity that supports athletes as they transition from sport, and uses their skills and experience to transform the lives of disadvantaged young people through mentoring programmes.

In 2010, Holmes was inducted into the England Athletics Hall of Fame.

In November 2010, Holmes took part on the ITV game show The Cube. She lost a record breaking 8 lives on her second game "Gradient" and was defeated but still took away £1,000 for her charity.

In October 2011 Holmes appeared live on Dubai One lifestyle show Studio One as she talked about her life and career after athletics.

In 2013 Holmes became the face of MoneyForce — a programme run by the Royal British Legion to deliver money advice to the UK Armed Forces.[8]

In early 2015, she took part in the ITV series Bear Grylls: Mission Survive.

In 2012 Holmes was one of five Olympians chosen as part of a series body-casting artworks by Louise Giblin exhibited in London and copies being sold in aid of the charity Headfirst.[13]