The Kelvin–Stokes theorem[1][2][3][4][5] (named Lord Kelvin and George Stokes), also known as the curl theorem,[6] is a theorem in vector calculus on R3. Given a vector field, the theorem relates the integral of the curl of the vector field over some surface, to the line integral of the vector field around the boundary of the surface. The Kelvin–Stokes theorem is a special case of the “generalized Stokes' theorem.”[7][8] In particular, a vector field on R3 can be considered as a 1-form in which case curl is the exterior derivative.

First step of the proof (defining the pullback)

so that P is the pull-back[note 2] of F, and that P(u, v) is R2-valued function, dependent on two parameters u, v. In order to do so we define P1 and P2 as follows.

is the normal inner product (for Euclidean vectors, the dot product; see Bra-ket notation) of R3 and hereinafter,

stands for the bilinear form according to matrix A.[note 3]

According to the definition of a line integral,

where, Jψ stands for the Jacobian matrix of ψ, and the clear circle denotes function composition. Hence,[note 3]

So, we obtain the following equation

On the other hand, according to the definition of a surface integral,

Fourth step of the proof (reduction to Green's theorem)

Combining the second and third steps, and then applying Green's theorem completes the proof.

In this section, we will discuss the lamellar vector field based on Kelvin–Stokes theorem.

First, we define the notarization map as follows.

is a strictly increasing function. For all piece-wise smooth paths c: [a, b] → R3 and all smooth vector fields F, the domain of which includes c([a, b]), one has:

In fluid dynamics, it is often referred to as a vortex-free or irrotational vector field. Furthermore, if the domain of F is simply connected, then in mechanics, it can be identified as a conservative force.

In this section, we will introduce a theorem that is derived from the Kelvin–Stokes theorem and characterizes vortex-free vector fields. In fluid dynamics it is called Helmholtz's theorems.[note 5]

That theorem is also important in the area of Homotopy theorem.[7]

Some textbooks such as Lawrence[7] call the relationship between c0 and c1 stated in Theorem 2-1 as “homotope” and the function H: [0, 1] × [0, 1] → U as “homotopy between c0 and c1”. However, “homotope” or “homotopy” in above-mentioned sense are different (stronger than) typical definitions of “homotope” or “homotopy”.[note 6] So from now on we refer to homotopy (homotope) in the sense of Theorem 2-1 as tube-like-homotopy (homotope).[note 7]

Proof of the theorem 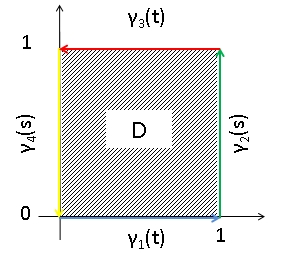 Hereinafter, the ⊕ stands for joining paths[note 8] the

stands for backwards of curve[note 9] 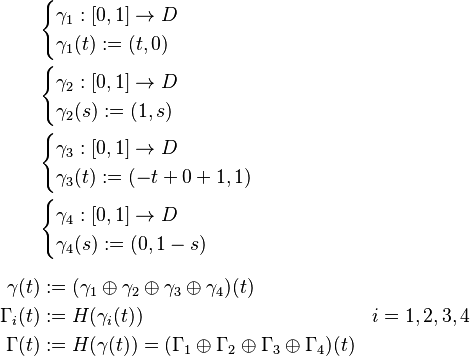 will be obvious according to the Theorem 1 and, F is Lamellar vector field that, right side of that equation is zero, so,

and, H is Tubeler-Homotopy that,

On the other hand,

that, subjected equation is proved.

Helmholtz's theorem, gives an explanation as to why the work done by a conservative force in changing an object's position is path independent. First, we introduce the Lemma 2-2, which is a corollary of and a special case of Helmholtz's theorem.

Lemma 2-2, obviously follows from Theorem 2-1. In Lemma 2-2, the existence of H satisfying [SC0] to [SC3] is crucial. It is a well-known fact that, if U is simply connected, such H exists. The definition of Simply connected space follows:

So, someone may think that, "for a conservative force, the work done in changing an object's position is path independent" is elucidated. However there are very large gaps between following two:

To fill that gap, the deep knowledge of Homotopy Theorem is required. For example the following resources may be helpful for you.

Considering above-mentioned fact and Lemma 2-2, we will obtain following theorem.

Lemma 3-1 (Notarization map of singular two cube). Let D be a singular 2-cube with map ψ and U ⊆ R3 open and non-empty. Suppose the image of I × I under a piecewise smooth map

be a singular 2-cube. If F is a smooth vector field on U we have:

In order to facilitate the discussion of boundary, we define

stands for backwards of curve.[note 9] 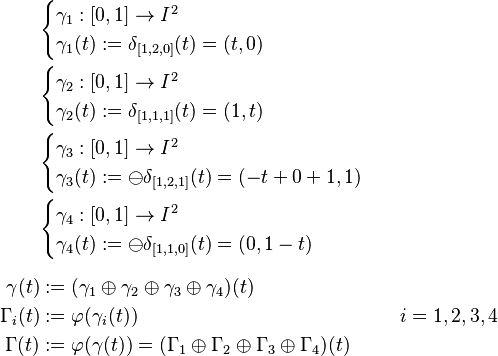 is called a Cube subdivision of the S.

are said to be an edge of the cube subdivision if

. That means, l is said to be an edge of

if and only if there are unique λ, c and j such that,

(2) The boundary of the cube subdivision is a collection of edges in the above sense.

means the boundary of

(3) The notation for an edge l is as follows:

therefore the definition of boundary is not dependent on the choice of cube subdivision.

Therefore the following Definition is well-defined:

and then such l are said to be an edge of S.